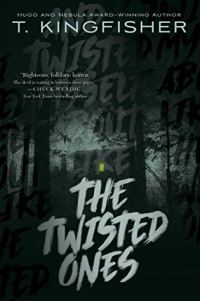 Book: “The Twisted Ones” by T. Kingfisher

Book Description: When a young woman clears out her deceased grandmother’s home in rural North Carolina, she finds long-hidden secrets about a strange colony of beings in the woods.

When Mouse’s dad asks her to clean out her dead grandmother’s house, she says yes. After all, how bad could it be?

Answer: pretty bad. Grandma was a hoarder, and her house is stuffed with useless rubbish. That would be horrific enough, but there’s more—Mouse stumbles across her step-grandfather’s journal, which at first seems to be filled with nonsensical rants…until Mouse encounters some of the terrifying things he described for herself.

Alone in the woods with her dog, Mouse finds herself face to face with a series of impossible terrors—because sometimes the things that go bump in the night are real, and they’re looking for you. And if she doesn’t face them head on, she might not survive to tell the tale.

Review: Of all the horror genres, folk horror tends to be one of the few that I have a hard time sinking my teeth into. While I love the movie “The Wicker Man” (and “The Blair Witch Project”, if you can classify it as such? I feel like maybe you could?), I still haven’t seen “Midsommer” and don’t feel a huge draw to do so. I’ve read a few folk horror novels, and none of them really stood out to me as particularly engrossing or engaging. But I am always wanting to give the subgenre a chance. Because of this, I wanted to read “The Twisted Ones” by T. Kingfisher. After all, while it was described as ‘folk horror’ by some reviewers, the idea of monsters in the woods slowly creeping up was too good of a premise to pass by.

“The Twisted Ones” starts out with a lot of promise. A woman named Mouse (our first person narrator) has gone to her grandmother’s house (along with her dog Bongo) to clean it out after she has died. Mouse and her grandmother didn’t get along, as her grandmother was a TERRIBLE human being, but Mouse was close to her stepgrandfather, Cotgrave, and as she’s cleaning memories of her time with him bubble up. At night she has to contend with her grief and guilt regarding Cotgrave, her anger at her grandmother, and strange noises she hears outside that Bongo just won’t leave alone. As one might guess, the noises aren’t just harmless nature sounds, and soon Mouse finds herself being drawn into stories of ‘twisted ones’, and stumbling into landscapes that shouldn’t be there. Throughout all of this, I was definitely enjoying this story and the slow burn that Kingfisher was putting forth. I liked how through Mouse’s narration we are tuned in with her own initial skepticism (and delightful snark), though we have a dread in our gut that the noises and the weird blurs of animals running around in the dark aren’t just run of the mill North Carolina fauna. As it slowly becomes clear that Mouse and Bongo are dealing with something sinister and threatening, the tension is so tightly wound that the reader will potentially look out their own dark window at night and worry about what they will see. The building tension is grand, as are the supporting characters that Mouse meets while she is in the cabin in the woods. From Foxy the eccentric woman down the road to Tomas the helpful handyman, Mouse and the cast of characters feel real and sympathetic, to the point where you care about them and what happens to them.

All that said, once we get to the heart of the horror and find out what these creatures are any why they are here, the fear and scares immediately departed for this reader. I think that when it comes to ‘monsters in the woods stories’, I am only interested until the monster is revealed. The terror and dread is the unknown, the strange noises in the woods, the blurs in the moonlight. When we get to portals and interactions with the actual beings face to face, and the other revelations as to what they may or may not with Mouse, my interest was completely lost. But I think that has more to do with a lot of my own folk horror tastes, which are firmly placed more towards ambiguity and the unknown. I am far more taken in by an unseen Blair Witch who may or may not be stalking a group of filmmakers in the woods, than I am by a reveal of ‘monsters in the woods aren’t real but used to control the town’ two thirds of the way through the narrative. You have me when it’s ambiguous in folk horror. The moment you explain it, my interest wanes.

This is very much an instance of my own personal tastes getting in the way of the story, and that shouldn’t dissuade ride or die folk horror fans from checking it out. “The Twisted Ones” has some tense moments and scary themes regardless of how I felt about the last third of the book. So don’t take my word for it. Give it a go if this sounds like a book that will keep you up at night and out of the woods.

Rating 6: This had some tense moments and a fun and snarky narrator, but the big reveal was a bit of a let down. That said, it could be just me, and not the book itself.

“The Twisted Ones” is included on the Goodreads lists “A Walk in the Woods”, and “Best Supernatural Books, No Romance, No Series”.

Find “The Twisted Ones” at your library using WorldCat!