We’re in December now, and both of us are looking forward to cozying up on the couch with some yummy cookies, some holiday beverages of various kinds, and some great books. But it wouldn’t be the Christmas season without some Christmas movies! So we thought we’d take a break from books and share with you our favorite Christmas films.

I think I’ve highlighted this movie before around Christmas, probably in our “Not Just Books” posts. But it’s impossible to list three of my top Christmas films without including it. It’s so perfectly imperfect with almost all of the characters being believably flawed, but still Kris Kringle is the only true Santa Claus ever, as far as I’m concerned. It’s a yearly tradition for me to watch this movie while I wrap presents. This often results in the present wrapping itself taking way longer than necessary as I’m so often distracted. But what do I care! Anyone who isn’t moved by the part where Santa sings with the Dutch girl is hard-hearted. There, I said. it. 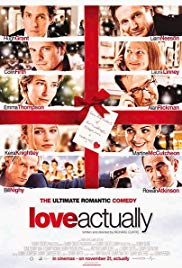 Yes, yes, sappy, overly sentimental “Love Actually” makes the list. But sometimes, you just want to have a good cry around Christmas when all the stress (normal stress, but also now somehow extra stress to STOP BEING STRESSED AND BE MERRY!) really starts to build up. And this movie is the perfect, saccharine flick to hit the spot. Plus, there’s no arguing with the stellar cast. Colin Firth is, obviously, always a favorite even though his story here is arguably one of the less compelling. And watching Alan Rickman be a sleaze who cheats on the wonderful Emma Thompson (who does that!?!) is delightfully hateful. And Liam Neeson is again the most wonderful father ever. So yeah, yeah, cheesy it may be, but I love it.

This is a seasonal film, obviously, taking place over an entire year and feeling appropriately festive for each and every one of those seasons. But some of the major changes happen during the winter months, and Meg Ryan has some lovely monologues about Christmas and how hard the holiday season can be when we’re also missing those we love who can’t celebrate with us. For me, this makes it a great Christmas movie. Plus, to counteract all of the crying from “Love Actually,” this film has a lot of laughs and is my favorite Ryan/Hanks film. Yes, more than “Sleepless in Seattle” due to the simple fact that the two have much more screen time together in this movie. 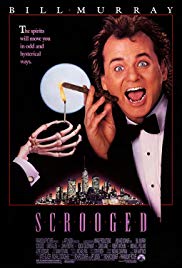 I’ve talked about this movie before on this blog, but it remains my be all end all Christmas movie. This is the one Christmas movie I watch at least twice during the season, and the one that on Christmas Day my husband and I watch with mimosas and Christmas cookies. It’s an update of the “Christmas Carol” story, starring Bill Murray as Frank Cross, a cynical and bitter TV executive who has no love for Christmas and all the love for power. As you can imagine, he is visited by a number of ghosts to teach him the true meaning of Christmas. And let me tell you, everything about this movie is delightful. Murray is fantastic (naturally), but the supporting cast is also awesome, including Alfre Woodward as his assistant Grace (Bob Cratchit), Karen Allen as Claire (Belle), and Carol Kane as the Ghost of Christmas Present. It’s witty and dark and weird, and it still has one of the most emotional and touching endings of any Christmas movie, bar none.

“The Nightmare Before Christmas”

I’m solidly on the ‘this is a Christmas movie’ side of the argument. I mean, sure, it stars a skeleton and has other ghosts, ghouls, and creepy things, but they are CELEBRATING CHRISTMAS. “The Nightmare Before Christmas” has had a special place in my heart since my childhood, with catch songs, spooky imagery, and a sweet romance weaved into a heartfelt Christmas tale. For the unfamiliar, Jack Skellington, the Pumpkin King and King of Halloween, has been feeling ennui about his role in the October holiday. So when he stumbles upon Christmas Town and finds out about Christmas, he decides that he wants to be in charge of the Yuletide Cheer. As one can imagine, his interpretations are a little, shall we say, off, and Christmas may be wrecked thanks to his good, misguided intentions. The music is catchy, the claymation is still stunning, and the real hero of the story Sally Ragdoll (played by goddess Catherine O’Hara) really solidifies the story for me. A true must watch in our household. 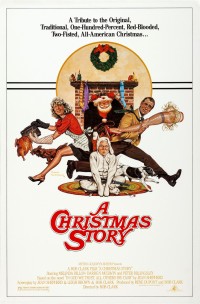 Obvious? I prefer ‘classic’. Before the cable channels started showing “A Christmas Story” on a loop every Christmas, it was a cult hit and one that my childhood home was quite familiar with. We had the VHS when I was a child, and it was a movie that my parents always enjoyed because their childhoods (though a couple decades past the time period of the film) had a lot of similarities to Ralphie’s. Ralphie is a kid growing up in pre-WW2 Indiana, and all he wants for Christmas is a Red Rider BB Gun. That particular Christmas season for him involves tongues stuck to lamp posts, bullies, foul mouthed fathers, and a saucy lamp, and the anecdotes all come together to tell a very funny, and also very charming, story of youth. While there are many scenes that stand out as fantastic, my favorite (perhaps bolstered by my Mom’s love for it) involves a crabby department store Santa who literally kicks a child down a slide. Mean? Maybe. But hilarious. And the fact that generations of people can relate to Ralphie’s stories shows just how timeless some of the themes are.

What are some of your favorite Christmas movies? Let us know in the comments!