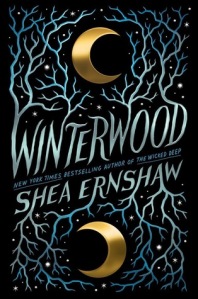 Book Description: Be careful of the dark, dark wood . . .

Especially the woods surrounding the town of Fir Haven. Some say these woods are magical. Haunted, even.

Rumored to be a witch, only Nora Walker knows the truth. She and the Walker women before her have always shared a special connection with the woods. And it’s this special connection that leads Nora to Oliver Huntsman—the same boy who disappeared from the Camp for Wayward Boys weeks ago—and in the middle of the worst snowstorm in years. He should be dead, but here he is alive, and left in the woods with no memory of the time he’d been missing.

But Nora can feel an uneasy shift in the woods at Oliver’s presence. And it’s not too long after that Nora realizes she has no choice but to unearth the truth behind how the boy she has come to care so deeply about survived his time in the forest, and what led him there in the first place. What Nora doesn’t know, though, is that Oliver has secrets of his own—secrets he’ll do anything to keep buried, because as it turns out, he wasn’t the only one to have gone missing on that fateful night all those weeks ago.

Review: Yet another sophomore book from an author whom I missed out on the first go around. Not quite sure why I never got around to “The Wicked Deep,” but when I saw this one pop up, once again I decided to be late to the party and see what all the fuss was about. Unfortunately, while this strategy has worked with other books (shout out again to “Song of the Crimson Flower”!), here it just proved that I probably made the right choice with the first book and these are just not for me.

Nora is out in the woods after one of the worst winter storms in years. Everything is closed down, but she is not like others: she is a Walker woman and does not fear the woods. Instead, she shares a close bond with this strange, mysterious place where others dare not to walk. This connection leads to her a lost boy, missing for weeks and presumed dead. But he has survived the forest…somehow. As they grow closer to each other, Nora begins to suspect that Oliver has secrets of his own. Perhaps he, too, shares a connection with the forest? But what is it and does it pose a threat?

There were several reasons this book didn’t work for me, and most of them have to do with either the YA fantasy genre reading as a bit tired recently, or it’s just me. But the first thing that stood out to me as a warning sign that this book and I might not get along was the writing itself. I had heard that this, like the author’s first book, was noted for its atmospheric writing. I think I may have a different understanding of that word than the way it is often used. I have used it myself, don’t get me wrong. Probably recently, because if I didn’t say it in my review of “The Starless Sea,” then that’s an example of the type of book that I would describe that way. But when I use that word it has to do with how an author draws a scene. It doesn’t have to be restrained to the physical characteristics of setting, but to a scene as a whole: the action of it, the location, the indescribable “feel” of a situation. An atmospheric style of writing adds depth and is beautiful to read on its own, often with a poetic choice of words.

But I feel that when it is used to describe books like this one, most reviewers are getting at something different. I think it’s still consistently used for these books, but in a different way than what I described above. Most notably, I think the “atmosphere” is often applied to the characters themselves. Perhaps there is still some sense of poetry to the words chosen, but beautiful words devoid of rational meaning don’t result in much, in my opinion. This then ends up with books that use random, disconnected phrases to describe characters. In this book, only two pages in, the main character is describing herself as “more darkness than girl.” Ok. Sounds nice enough, I guess. But what does that actually mean? I have no idea, and given that we’re only two pages into the book, I don’t even have any context where I could try to parse out an actual meaning from that. Instead, it reads as if the author is simply throwing around  pretty phrases and not bothering to ground them in anything, or, frankly, make them worth while to the story at all. This is only one example, but it continues throughout the book.

This is the type of “atmosphere” that I find all too often in YA fantasy, and it’s always a red flag for me. It may not always be true (I’m sure there are exceptions if I really thought about it), but usually it’s a good predictor that the author seems to be having more fun writing pretty strings of words than constructing an actual story. Paired with this habit often comes bland characters, convenient plots, and stories that sound good on paper but prove to be underwhelming. Unfortunately, that all proved to be true here as well.

I didn’t care about our main characters. Neither of them were bad, but I also didn’t feel particularly attached to them. How can I be attached to someone who introduces herself to me as “more darkness than girl?” I don’t know what that means, and honestly I’m too lazy to find out. It’s the books job to make me care, and that doesn’t do it. I did like the general overview of the story, and the witchy elements and spooky woods were promising. But they were paired with a convenient and predictable plot. I was able to guess many of the twists (including the big one) right away which cut the legs out of it right from the start.

I feel like I’ve come down hard on this book, and I don’t want to make it seem that this one is any worse than most of the run-of-the-mill YA fantasy stories out there like this. I guess I was just in a mood to talk about this particular frustration, and this book had the bad luck of being the most recent one to show up on my reading list featuring this specific peeve. Fans of the author’s first book and her writing style will likely be pleased with this. But those who recognize the traits I’m talking about may find themselves underwhelmed by this story.

Rating 6: Hits a nerve for one of my pet peeves, but is otherwise a fairly standard, if uninspiring, story.

“Winterwood” is a newer title, so it isn’t on many relevant Goodreads lists. But it should be on “Magical Trees.”