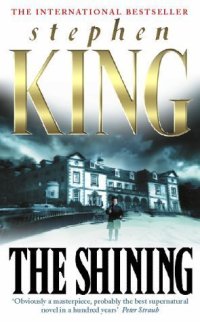 Book: “The Shining” by Stephen King

Book Description: Jack Torrance’s new job at the Overlook Hotel is the perfect chance for a fresh start. As the off-season caretaker at the atmospheric old hotel, he’ll have plenty of time to spend reconnecting with his family and working on his writing. But as the harsh winter weather sets in, the idyllic location feels ever more remote…and more sinister. And the only one to notice the strange and terrible forces gathering around the Overlook is Danny Torrance, a uniquely gifted five-year-old.

Review: Believe it or not, “The Shining” has a deep, personal meaning for me, and that is because it’s proof that Stephen King books can bring people together. I approached my best friend from high school (and still good friend today) Blake because of this book. He was reading it in the hallway, and as someone who had already read it seeing someone else experiencing it gave me the need to be like ‘I LOVE that book!’ It was the start of an enduring friendship. But on top of that, “The Shining” is a terrifying read that has gone down in literary history as one of the best horror novels of the 20th Century, and really solidified King’s place as a horror author. And the rest, as they say, is history. In anticipation of the film adaptation of “Doctor Sleep”, the sequel to “The Shining”, I decided to re-read both books to see how they held up. So, just in time for Halloween Week, the first up is the original, and I’m finally returning to The Overlook Hotel after all these years of being away.

At the very heart of “The Shining” is a gothic ghost story, and while it may not take place on a moor in England, it has all the elements that make the genre great. You have an isolated hotel that cannot be escaped once the snows come. You have three people living in said hotel, and one of them is slowly being driven mad, be it because of the isolation, his own demons, or something else. And you have unique and incredibly scary ghosts and a twisted history that has made the location rotten to the core. King has a variety of bad things at The Overlook, from the decomposing Mrs. Massey in room 217 to visions of a Mafia murder in the Presidential Suite to topiaries that move and fire hoses that act like coiling snakes.  Mrs. Massey is by far the worst, a lurching a rotting corpse that reaches out for those who dare enter her room, but many others are lurking and effective in their own right. While it may seem like the idea of moving animal shaped plants is a little cheesy, it’s not cheesy when a character is being slowly stalked by them in a deranged game of red light, green light. King builds the dread and makes you wonder if what we are seeing is real, a vision (on Danny’s part), or a descent into madness (on Jack’s part), and boy does the tension pull you tight. Even the little things that could just as easily be placed in real life, like the boiler that ‘creeps’, set a scene on a knife’s edge. The Overlook is still one of King’s greatest villains, and the way that King made a place into a character with such malevolence and horror stands the test of time all these years later.

Danny Torrance is one of the people who sees the Overlook’s horrors, his gift of ‘The Shining’ (or psychic powers) making him incredibly perceptive, but also susceptible, to it’s evils. Danny’s voice is so authentic, as King really harnesses the thoughts, feelings, and actions of a little boy. Danny is endearing, and strange, and as his visions get worse and his father Jack starts to become more and more corrupted, he becomes more vulnerable and yet resilient. Reading this book as a teen I liked Danny enough, but now revisiting it I just loved him. King captures childhood earnestness, captures the innocence that a little boy could still have even though he’s seen and experienced terrible things, and never makes Danny sound juvenile, nor too precocious either. And the things that he sees are filtered through a child’s eyes, which in some ways makes them all the more disturbing. Danny going into Room 217 is still one of the most horror filled moments of this novel, and perhaps of all of King’s bibliography.

But for me, the scariest part of “The Shining” has changed. As an adult, and a new mother to boot and therefore someone with a whole new perspective on parenthood, now the biggest scares come from Jack Torrance and his potential to be a family annihilator, be it due to the hotel’s influence or his own violent tendencies.

Even before The Overlook, Jack’s alcoholism had him spiraling into addiction, emotional instability, and domestic abuse towards his wife and little boy. When we meet Jack he’s been sober for a little over a year, and while it seems that he is on the upswing with Wendy and Danny, there are still violent tendencies that come through and have serious consequences, consequences that make him take this isolating job in the first place, and more vulnerable to the malignant influence of The Overlook. It’s interesting to read this now, knowing that King himself was battling his own addictions as he wrote it, and how his insecurities about how he was as a father and husband come through off the page. Jack’s portrayal is both a villain who could potentially kill those he loves most, and yet a tragic figure who wants so badly to be better, even if he can’t quite achieve it. While The Overlook is certainly a bad influence and its ghosts are certainly helping drive Jack insane, you can’t help but get the feeling that perhaps, even without the ghostly interference, he might have ended up doing something horrible to Wendy and Danny, should he give in to his addictions at any time. It’s a deeply resonant characterization, and knowing that King was struggling as well it gives it even more dour weight and tragedy. I remember that around the time I read this book as a teen I asked my Dad why he hadn’t read it or even seen the movie. And he said that he couldn’t handle the idea of a husband and father murdering those he was supposed to love and care for. I didn’t really get it then. I absolutely get it now. King, once again, shows that some monsters in life don’t have to be supernatural.

“The Shining” isn’t without faults. Wendy, our one female (non ghost) character, isn’t terribly fleshed out or interesting. And as much as I love Dick Halloran, he sure fits into the ‘magical negro’ trope that King still tends to embrace with too much vigor. And, like many King stories, the ending has some flaws and doesn’t QUITE land, at least not completely. But there is a reason that it has endured for so long, and that it’s one of King’s most beloved works. It’s damned scary. I am so glad I went back to it after all these years. And given the influence this book, like all of King’s works, has had on my life, in some ways, like the ghosts at The Overlook, I never really left.

On Thursday we’re going to dive in to the sequel, “Doctor Sleep”.

Rating 9: A haunting and deeply scary horror story that melds ghosts, evil, and emotional demons into one entity of terror. Stephen King’s classic is still effective and disturbing.

“The Shining” is included on the Goodreads lists “Ghost Stories”, and “Modern Gothic”.

Find “The Shining” at your library using WorldCat!