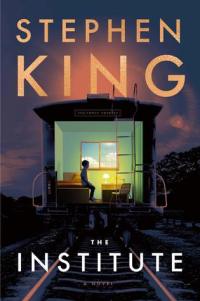 Book: “The Institute” by Stephen King

Book Description: From #1 New York Times bestselling author Stephen King, the most riveting and unforgettable story of kids confronting evil since It—publishing just as the second part of It, the movie, lands in theaters.

In the middle of the night, in a house on a quiet street in suburban Minneapolis, intruders silently murder Luke Ellis’s parents and load him into a black SUV. The operation takes less than two minutes. Luke will wake up at The Institute, in a room that looks just like his own, except there’s no window. And outside his door are other doors, behind which are other kids with special talents—telekinesis and telepathy—who got to this place the same way Luke did: Kalisha, Nick, George, Iris, and ten-year-old Avery Dixon. They are all in Front Half. Others, Luke learns, graduated to Back Half, “like the roach motel,” Kalisha says. “You check in, but you don’t check out.”

In this most sinister of institutions, the director, Mrs. Sigsby, and her staff are ruthlessly dedicated to extracting from these children the force of their extranormal gifts. There are no scruples here. If you go along, you get tokens for the vending machines. If you don’t, punishment is brutal. As each new victim disappears to Back Half, Luke becomes more and more desperate to get out and get help. But no one has ever escaped from the Institute.

As psychically terrifying as Firestarter, and with the spectacular kid power of It, The Institute is Stephen King’s gut-wrenchingly dramatic story of good vs. evil in a world where the good guys don’t always win.

Review: Whenever a new book I really want to read is about to come out, I try to get myself positioned high on the request list at the library. When this doesn’t work, I will make sure it’s going to be available at my former job on the day it comes out, as copies from that branch don’t go to the request list. And then once it’s publication day, if I can I will rush to that branch before opening, and become that patron that I used to kvetch about: the one who hangs out outside before the doors open and rushes the new wall as soon as they do. This made it so I got a copy of Stephen King’s “The Institute” at the library the day it came out, and yeah, I was a bit of a sore winner when I snagged it off the display. We are kind of in the midst of a King Renaissance right now, from new books to adaptations of his works in movie theaters and on TV and computer screens. I’m always going to be stoked for anything King related, and he has so much content to explore that you have a lot to work with. Unfortunately, on the flip side of that is the fact that not everything is going to be a winner, and “The Institute”, for me, was not a winner.

But like usual, we’ll start with the good. Even in books he’s written that don’t quite click with me, I am almost always happy with the way that King portrays childhood experiences and childhood friendships. From “It” to “The Body”/”Stand By Me”, the way that he can capture the innocence and yet importance of these childhood bonds and put them on the page is almost always incredibly effective. He brings this talent to “The Institute”, as whenever he focuses on Luke Ellis, Kalisha, and the other child prisoners it feels like you’re seeing real kids interacting with each other. I was worried that the innate precociousness of the children, especially super genius Luke, would stunt the dialogue and relationships, but I greatly enjoyed all of them whether they were playing, scheming, or mourning. While I didn’t feel like I got to know all of them as deeply as I got to know The Losers Club or the four boys who went looking for a dead body, I still liked seeing the glimpses into the relationships that we did, as it was always entertaining. With a resurgence in popularity of ‘kids solving mysteries/fighting back against more powerful entities’ because of “Stranger Things”, I definitely get tapping back into that kind of tale. It is also very hard to deny that, given the horrific reality that children are being imprisoned in cages at the Southern Border, some of the themes are all the more resonant in this story. King does a good job of drawing comparisons without treading into distaste, and given that I’m sure this book had already been submitted to the publisher before some of the more recent developments I definitely couldn’t help but connect his story to the horrible things our Government is doing. Especially as the slow reveal of The Institute’s true intentions is carefully peeled back. Plus, the pacing was well done and it never felt slow, so it was mostly entertaining.

The reason that this doesn’t get a higher score from me is because “The Institute”, while being entertaining, didn’t quite evoke the emotions I have come to want from Stephen King novels. Yes, the concept is horrible and scary, and there were certainly thrilling aspects of the plot as we reach the end, but I never felt the actual tension, elation, sadness, and fear. For whatever reason it just didn’t connect with me. I think that part of it was that this felt less like a horror novel and more like a conspiracy thriller, and while that’s fine and I generally like a good conspiracy thriller, this one just didn’t quite click. And I think the other part I already kind of touched on earlier, in that while I liked the characters and the relationships they had with each other (the kids especially), I don’t think that we got to know them well enough for me to really connect with them. And if I’m not as connected, I’m not as invested. I don’t think “The Institute” was a bad read by any definition, but if a book falls into these traps that I’ve mentioned, I’m just not going to enjoy it as much.

I’m so happy that Stephen King is still writing, and that he’s getting all kinds of attention right now. While “The Institute” was a miss, the man is still my favorite horror author of all time. And given that there’s already rumors of this book being adapted into yet another TV series based on King source material, it may be in your interest to give it a go regardless of what I thought!

Rating 6: While “The Institute” was an entertaining read and had its moments and details that I liked, overall it fell a little flat for me.

“The Institute”, surprisingly, isn’t included on many relevant or specific Goodreads lists. But I think that it would fit in on “Conspiracy Fiction”, and “Books like Stranger Things”.

Find “The Institute” at your library using WorldCat!