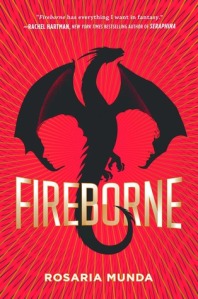 Where Did I Get this Book: BookishFirst

Book Description: Annie and Lee were just children when a brutal revolution changed their world, giving everyone—even the lowborn—a chance to test into the governing class of dragonriders.

Now they are both rising stars in the new regime, despite backgrounds that couldn’t be more different. Annie’s lowborn family was executed by dragonfire, while Lee’s aristocratic family was murdered by revolutionaries. Growing up in the same orphanage forged their friendship, and seven years of training have made them rivals for the top position in the dragonriding fleet.

But everything changes when survivors from the old regime surface, bent on reclaiming the city.

With war on the horizon and his relationship with Annie changing fast, Lee must choose to kill the only family he has left or to betray everything he’s come to believe in. And Annie must decide whether to protect the boy she loves . . . or step up to be the champion her city needs.

Review: I’m always interested in a good dragon book. And for as popular as the subject matter is, it’s rare that I find one that really hits the spot for me. Maybe it’s just that the more I like something, the higher standards I set for it. But combined with an intriguing book description and comparison to “Red Rising,” I was excited to see what new take “Fireborne” had to offer!

Revolutions are bloody and brutal, but what comes after can be just as hard. The decks have been shuffled leaving those who survived living very different lives than the ones they had before. For Annie and Lee, these changes hit very close to home, but in very different ways. Now, together, they are slowly climbing their way through the ranks as dragon riders, each hoping to build their own future in this new world. But the old regime has only gone underground, and when it becomes clear that the revolution is not over, Annie and Lee must now, once again, choose sides.

I can definitely see how the comparisons to “Red Rising” came about. For all that a dragon is on the cover, this story is mostly a deep dive into the moral grey zone of what a revolution really looks like. Similarly to that book, it explores complex issues spending extra time highlighting that no choice is perfect and consequences are to be had no matter how good one’s intentions are going in. In our current political and cultural environment, I really appreciated the attention that went into this portrayal and the challenging questions it poses to not only its characters but to readers as well. It’s always refreshing to find a story that goes past the simple (and often unbelievable) “good” and “bad” of it all.

Both Annie and Lee provide insights into the past events of the revolution, the current regime, and, of course, the challenges posed by the resurgence of the conflict. At various times it was easy to side with one or another only to skip to the next chapter, read the other character’s perspective, and feel conflicted once again. I will say that Annie, by the nature of her story, had the easier sell, leaving Lee more often in the role of the character who needed to experience more growth and perspective.

However, at times, the writing itself seemed to let down these greater themes. For one thing, as I’ve gone into before, it’s always challenging to write two perspectives. Yes, Annie and Lee tell different stories and have differing challenges and views on events. But the writing itself is doing very little to differentiate their voices. Take away the actual story beats, and these two characters sound the same and it would be challenging to identify which of the two is speaking. This flaw makes it hard to truly connect to either character as they feel less like people and more like vessels through which to communicate the overall conflicts of the story.

The writing was also a bit slow. It did pick up towards the end and became quite engaging at that point. But it still took a bit to reach that point. This may, again, have to do with the challenge of feeling truly emotionally invested in either character. There were a lot of characters and connections between them that never felt fully explained leaving me more often than not still trying to pin down who was who about half way into into the book. A whiff of a love triangle was also a bit of a detractor even if it never became fully fledged.

I still really enjoyed the dragons, of course. And the overall story has a lot of potential growth. It’s tackling some big concepts and putting in the work to approach the realities of such decisions, actions, or inactions. Perhaps the second in the series will help cement to the two protagonists more fully into their own. I’m still game to check it out! And, if you’re interested in getting your hands on a free copy, don’t forget to enter our giveaway for “Fireborne!”

Rating 7: The story and themes outshine its own main characters at times, but there’s still a lot of potential in this first in a new trilogy!

“Fireborne” is a newer title so it isn’t on many relevant Goodreads lists, but, funnily, it is on this “We Fire the Darkness And Flame At Night.”