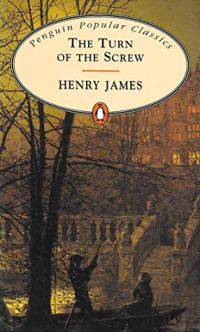 Book: “The Turn of the Screw” by Henry James

Half-seen figures who glare from dark towers and dusty windows- silent, foul phantoms who, day by day, night by night, come closer, ever closer. With growing horror, the helpless governess realizes the fiendish creatures want the children, seeking to corrupt their bodies, possess their minds, own their souls…

But worse-much worse- the governess discovers that Miles and Flora have no terror of the lurking evil.

For they want the walking dead as badly as the dead want them.

Review: I’ve mentioned in the past that I have a huge gap in my literature experience when it come to ‘the classics’. I took a rather unconventional load of English and Lit courses in high school and college, and because of that a number of stories have been left behind. The horror genre is no exception, surprisingly enough. I have had “The Turn of the Screw” in the back of my mind since I was a teenager, and it sat on my Kindle for a few years after I purchased a few old school horror reads that then just sat there. My motivation to finally read this book came from two places; I read “The Turn of the Key” by Ruth Ware and knew I was probably missing less known references, and the next Mike Flanagan “Haunting” series is going to be based on this Henry James ghost story. It was obviously time to dive in and read the tale of terror that has influenced so much of the genre.

“The Turn of the Screw” was one of those game changing tales that pushed the ideas of horror and what you could do within the genre itself. There is no denying that Henry James paved the way for modern haunted house tales like “The Haunting of Hill House” and movies like “The Others” when he took ideas of unreliable narrators and unsettling ghosts vs over the top ghosts and put them on the page. Some of the things that I really liked about this book were because of these tweaks and experimentations. “The Turn of the Screw” takes great Gothic elements and completely acknowledges the influence from Gothic stories, be it references to “Jane Eyre” or “The Mysteries of Udolpho”. Bly is isolated and distant, and the unnamed Governess is left there with two strange children, another servant, and no head of house for guidance or direction. As she falls more and more into physical isolation, so too does her mind fall into mental isolation, which is really what you need for a Gothic theme to really have a punch. I also really appreciate how James wrote this story in a way that makes the Governess a completely unreliable narrator, and that we can’t quite figure out whether or not there are actual ghosts and Bly that want to take the children, or if she is slowly descending into madness and she is the actual threat the whole time. It’s left up to interpretation, and arguments can be made for either scenario. I honestly don’t know where I fall on the ‘was it ghosts or insanity’ argument, James was so convincing of both. And frankly, I don’t know which would be the worse answer, given how the story ends. Along with that, in my mild bit of research into the background of this story, James was one of the first people to write ghosts in an unsettling way as opposed to over the top and melodramatic. And that really stands out in this story, as the ghosts of Quint and Miss Jessel are more inclined to move through the grounds or appear in dark hallways and merely stand there as opposed to rattling chains and wailing. And for me, that’s far more creepy and disturbing. There were moments of imagery in this book that sent chills up my spine.

However, the reason that I am giving “The Turn of the Screw” a lower rating than one might expect from my praise is because of the writing style of the time period. This almost always knocks me off my game and distracts me when it comes to ‘classic’ stories, and “The Turn of the Screw” definitely fell into the trap of a lot of flowery language and slogging scenes with not as much action as I would have liked. When comparing it to another classic haunted house story like “The Haunting of Hill House”, I felt like it didn’t have the kind of pacing where the stakes were being repeatedly raised and the dread was building after every incident. I appreciate how this would have been groundbreaking for the time and how much it has done for the ghost stories that came after it. But for me, it was more of a slog to get through than I would have liked.

I think that reading “The Turn of the Screw” was ultimately a good choice, as I see how it works as a foundation for so many stories that I love. But it’s not one that I see myself revisiting as time goes on, as I might with “The Haunting of Hill House” or other classics like “The Legend of Sleepy Hollow”.

Rating 6: A classic horror story that paved the way for many themes within a genre, “The Turn of the Screw” has moments of dread, but sometimes is held back by the style it was written in.

“The Turn of the Screw” is included on the Goodreads lists “Books With Unreliable Narrators”, and “Quick Books”.

Find “The Turn of the Screw” at your library using WorldCat!

One thought on “Kate’s Review: “The Turn of the Screw””