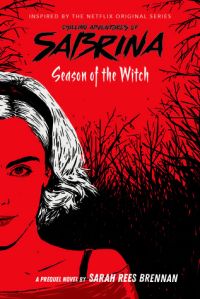 Book: “Season of the Witch” by Sarah Rees Brennan

Book Description: It’s the summer before her sixteenth birthday, and Sabrina Spellman knows her world is about to change. She’s always studied magic and spells with her aunts, Hilda and Zelda. But she’s also lived a normal mortal life – attending Baxter High, hanging out with her friends Susie and Roz, and going to the movies with her boyfriend, Harvey Kinkle.

Now time is running out on her every day, normal world, and leaving behind Roz and Susie and Harvey is a lot harder than she thought it would be. Especially because Sabrina isn’t sure how Harvey feels about her. Her cousin Ambrose suggests performing a spell to discover Harvey’s true feelings. But when a mysterious wood spirit interferes, the spell backfires in a big way.

Sabrina has always been attracted to the power of being a witch. But now she can’t help wondering if that power is leading her down the wrong path. Will she choose to forsake the path of light and follow the path of night?

Review: It’s Halloween season, and I had initially thought that that meant that we would be getting the next installment of “Chilling Adventures of Sabrina” in the coming weeks. Unfortunately, that didn’t come to pass. I am always going to be waiting on pins and needles for new content for this show and anything related to it (STILL WAITING ON VOLUME 2 OF THE COMICS!!), so thank goodness we have “Season of the Witch” by Sarah Rees Brennan to tide us over until it comes back!

This novel is part of the TV show canon, and serves as a prequel to the series set a few months before the first season. Sabrina Spellman, the teenage half mortal/half witch, is still struggling with her identity as she prepares for her dark baptism. She loves her mortal friends, but knows that if she takes the path of darkness she may have to say goodbye. It’s a conflict that has kind of been left behind on the show, and I’m not sure that I felt the need to revisit it at this point. I totally get why a book would function better as a prequel than occurring at the same time as the show since we don’t know what that canon is going to look like. I did like the overall plot for the most part, however, even if it did feel a little bit regressive, thematically. I liked seeing Sabrina take risks, risks that didn’t always pay off, and I liked how she and her cousin Ambrose interacted within the plot as he helps her with a potential ‘love spell’. Ambrose and Sabrina’s relationship is one that we see bits of on the show, but Brennan puts it at the forefront of the plot, and really lets us see the ups and downs of it and how they perceive each other in positive and negative ways. Ambrose envies Sabrina because of her freedom (which at this point he still does not have, as he’s still under house arrest), while Sabrina is resentful of the fact that he is more favored by Aunts Hilda and Zelda than she is, in her mind. They care about each other, but the tension definitely starts to bubble over, and it made for the most emotional part of the story. The rest of the plot was pretty okay too, though I will say that it doesn’t really add much to the show mythology. But on the other hand, it relies on it enough that I think you really do have to watch the show first in order to fully understand a number of the plot points and implications, even as a prequel. This isn’t necessarily a bad thing, but I was hoping it would stand on it’s own a little bit more.

However, I really liked the characterizations of this book. The majority of the perspective is, of course, Sabrina’s, but interspersed throughout are vignette chapters that give you insight into the other characters within the series. From Aunt Hilda to Roz to Theo (still Susie at this point) to Harvey, everyone gets a chance to shine. Aunt Hilda is especially well done, as Brennan captures her kindness and quirkiness with ease. But the best ones were the ones I wasn’t expecting as much. The first is the chapter revolving around Prudence, the head of the Weird Sisters and Sabrina’s frenemy. Prudence is complex on the show, but what I liked best about her chapter was that we got to see a deep look into her insecurities about feeling like she doesn’t really belong anywhere, and how Sabrina’s loving family makes Prudence envious, and therefore leads to her lashing out. Prudence is a top three character for me on the show, and I liked seeing her vulnerability really explored. The other chapter was even less expected, and that focused on Harvey’s brother Tommy. All we really know about Tommy on the show is that he is the most supportive person in Harvey’s life, and that he is a great person and a golden boy around town. But in his chapter we really got into his mind and his heart when it comes to Harvey, and why he stayed behind in Greendale when he had other opportunities. This chapter was endearing and rather bittersweet, as we know how things change and shift within the Kinkle family as the show goes on.

Fans of “Chilling Adventures of Sabrina” will find a fun and entertaining story in “Season of the Witch”. It may not add much to the universe as a whole, but it gives the reader some really good material for the characters that we know and love. It’s a witchy read for this witchy time of year!

Rating 7: A cute and fun side story/prequel to the “Chilling Adventures of Sabrina” Netflix show. It doesn’t add much to the mythology and even reverts a little too much sometimes, but it does explore character motivations of characters who don’t get as much attention on the show.

“Season of the Witch” is on some pretty broad Goodreads lists, but I think it would also fit in on “Young Adult Novels with Witches”, and “All Hallows Reads”.

Find “Season of the Witch” at your library using WorldCat!