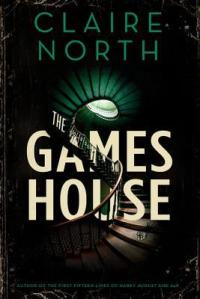 Book: “The Gameshouse” by Claire North

Book Description: Everyone has heard of the Gameshouse. But few know all its secrets…

It is the place where fortunes can be made and lost through chess, backgammon – every game under the sun.
But those whom fortune favors may be invited to compete in the higher league… a league where the games played are of politics and empires, of economics and kings. It is a league where Capture the Castle involves real castles, where hide and seek takes place on the scale of a continent.

Among those worthy of competing in the higher league, three unusually talented contestants play for the highest stakes of all…

Review: This book sounded like something altogether different. So different in fact that I wasn’t quite sure what I was getting! Was this a fantasy story? Some type of sci-fi dystopian future ala “The Hunger Games?” Would the said three contestants be fighting against each other? The sheer mystery of all, plus the appropriately creepy cover, was enough for me!

Throughout history disasters have struck, luck has failed one and served another, the slightest change can have lasting effects. It all seems so random. But what if behind many of these grand events lay a sinister and beguiling underworld where grand players used the entire earth as their playing board and kings and countries as their pawns? Who would join such a game? And more importantly, who would win?

Other than the intriguing general description, I didn’t know a whole lot about this book before picking up. Most importantly, I didn’t know that it had previously been released as three separate novellas. Once I realized this, it didn’t hugely change my take on the book, it is a fact worth noting going in, that this isn’t your typical, singe protagonist, linear story that one typically expects to find in novels. But, given the stories it does tell, I think the three separate novellas do fit very well together as a larger collection like this. It would have been interesting reading them individually, but together, you can see a greater progression, especially in the scale of the “games,” as each story unfolds.

That said, while the scale does get grander from the first to the last, I do think I enjoyed the first story the most. The smaller, more intimate setting and stakes somehow made it all feel a bit more personal and lead me to be more invested in the protagonist of that story and its outcome. As the three stories unfold, the fantasy elements begin to take over more completely. The first one felt more grounded as an alternate history with only a smidge of fantasy thrown in.

While the fantasy increased, story by story, I really liked the alternate history and blend of historical ficiton and fantasy that was woven across all three. These stories are definitely global and I liked that we got to deep dive into a few locations and times that aren’t often seen. The second book in particular, with its lush descriptions of early 20th century Thailand, was very interesting. While Venice (the setting of the first book) is always fun, it’s definitely a more common setting for a story. And the third one takes place in modern days and across the entire world. Each of these three had their own strengths, but, setting-wise, I did like the second one best.

The writing was also strong and quirky, living up to all the absurdity of its concept without becoming a mockery of it. There were some clever bit of commentary on identity, order, and chaos that were also slipped in there between the high stakes and increasing fantasy fare. I haven’t read anything else by this author, but this one was pretty darn fun and fans of hers are sure to be pleased. New readers might just find a new author to check out as well!

“The Gameshouse” isn’t on any Goodreads lists, but it should be on “Let the (deadly) games begin!”

Find “The Gameshouse” at your library using WorldCat!