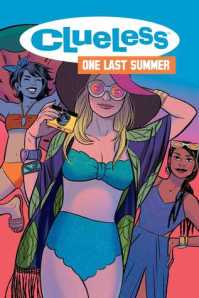 Book Description: Cher, Dionne, and Tai set off for one last summer of footloose and fancy-free fashion and fun before college starts!

The class of 1997 has left Bronson Alcott High School for good, and as the weather heats up, Cher and besties Dionne and Tai head off for their last summer vacation adventure together before, ugh, REAL LIFE!

Picking up after Clueless: Senior Year, head back to the ’90s for summer fun and fashion from superstar writers Sarah Kuhn (Heroine Complex) and Amber Benson (The Witches of Echo Park), and illustrator Siobhan Keenan.

Review: It took a little while for my library to get this book in their catalog, but they did and I got it right in time for summer! As I mentioned in my review of “Clueless: Senior Year” (linked at the bottom of the post), “Clueless” is one of my favorite movies and no matter how many times I watch it I will never get sick of it. I was very excited for the next comic when I heard that it was coming out, and the sort of long wait was absolutely worth it. Just like “Senior Year” before it, “One Last Summer” brings back Cher, Dionne, Tai, and more, and gives them worthy stories of their fabulous characters. On top of that, we got some focus on characters we hadn’t even seen yet (still no Elton though. I get it, but I love that creep so much that I can’t help but be bitter).

Cher, Dionne, and Tai are the primary focuses of the story, as they all have their own conundrums to solve, while trying not to think about how things are going to be changing in their lives. Cher has taken on a summer internship as an assistant to an advice columnist (who is not a very good or honest person, much to Cher’s chagrin), Dionne is in charge of planning a beach party that her parents are helming, and Tai is preparing for her favorite aunt to come to town, and introducing her to Travis. On top of that, all three of them are hoping to solve a mystery for their friend Summer, who has a secret admirer. The stories are kind of simplistic to be sure, but the characters were just so in character and absolutely on point that I highly enjoyed every foray that they went on. I also enjoyed that for some of the characters, especially Dionne, the worries and anxieties about having to go to a new environment and leave people behind make things all the more stressful, even if they don’t totally get why. I found Dionne’s storyline to be especially compelling, as she and Murray are going to different schools across countries from each other. The anxiety and fear of a long distance relationship after high school was captured perfectly, and as someone who knows from experience hers was the story that I most related to. It’s also great seeing the spotlight being shared between these three girls once again, as they all are so endearing and different from each other.

But as mentioned above, “One Last Summer” also brings more attention to other characters that didn’t get as much last time. The biggest one is Summer, a character from the movie who is probably best remembering for her shining moments at the Valley Party, where she initiated a game of Suck and Blow, and snagged a lawn snowman for no discernible reason. I liked seeing her being brought into the main three friend group, and I liked how well she fit in. Benson and Kuhn made her a distinct and fun character who is similar enough to fit in with Cher, Dionne, and Tai, but different enough that she felt like she had her own complexities. And I mean, fine, if we can’t get Elton I was totally happy getting another awesome lady character. Along with Summer we did see a little more focus on other characters, like Josh, Murray, and Travis. And on top of that, they got to play roles that usually are reserved for female characters, which felt like a bit of a subversion and I REALLY liked it. For Josh, we got to see his own insecurities when it comes to his relationship with Cher and his worries that she still may judge him when he’s a bit of a geek. For Murray, it’s his fears about the long distance relationship, and not being sure of how to deal with Dionne when her anxiety turns into anger. And for Travis, HE IS JUST SO SUPPORTIVE AND ADORABLE AND SWEET, just there to love Tai like she’s the goddamn best thing ever. HOW WONDERFUL IS THAT?

And the art continues to be very bubblegum and perfect for the tone. The characters look enough like their counterparts that it feels like the actors and actresses, but also show off Keenan’s unique style.

“Clueless: One Last Summer” was a bittersweet but lovely story for the characters from “Clueless”. I understand that Benson and Kuhn might stop here, but honestly they could keep telling these stories with these characters and I would be filled with joy.

Rating 8: Another fun and nostalgic story featuring some of my favorite movie characters, “Clueless: One Last Summer” brings back some classic characters, brings in new ones, and serves some cute summer stories!

“Clueless: One Last Summer” isn’t included on any Goodreads lists as of yet, but I think that it would fit in on “Summer Break Books for YA”, and “Comics & Graphic Novels by Women”.

Find “Clueless: One Last Summer” at your library using WorldCat!