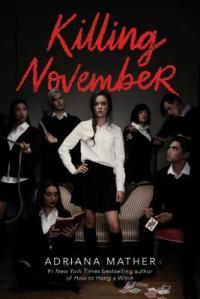 Book Description: It’s a school completely off the grid, hidden by dense forest and surrounded by traps. There’s no electricity, no internet, and an eye-for-an-eye punishment system. Classes include everything from Knife-Throwing and Poisons to the Art of Deception and Historical Analysis. And all of the students are children of the world’s most elite strategists—training to become assassins, counselors, spies, and master impersonators. Into this world walks November Adley, who quickly discovers that friends are few in a school where personal revelations are discouraged and competition is everything. When another student is murdered, all eyes turn to November, who must figure out exactly how she fits into the school’s bizarre strategy games before she is found guilty of the crime…or becomes the killer’s next victim.

Review: Adriana Mather is one of those authors whose books I am probably always going to pick up no matter what. I so enjoy the “How to Hang a Witch” series, and when I saw that Mather had a new book that started off a new one I was a little bummed that I had to wait a bit longer before she revisits Samantha and Elijah, but excited at the prospect of a new series with new characters. And, lo and behold, this new series takes place at a BOARDING SCHOOL WITH A SHADY SET UP!! Bring on the drama! I will gladly bask in all of it!

“Killing November” is definitely more focused on being a thriller and mystery that Mather’s previous series, and I think that this is both a strength and a weakness. The reason it’s a strength is because of the character of November herself. We know that her father has been involved with some espionage and secret government work, so when she awakens in a strange room and at a strange school she’s never heard of, we know that while she’s heard of shit and seen some shit in theory, she will still have some adjusting to do. November is a fun protagonist, because she’s both pragmatic in her personality (aka I completely believed her as being a bit more cynical and world weary thanks to her family background), and yet still in the dark enough that she has HUGE adjustments to make at this new, bizarre school that focuses more on combat, violence, and duplicity than your average educational institution might. November finds herself having to learn about knife throwing, poisons, and psychological warfare, without being given any kind of background, so she is the perfect stand in for the reader in terms of learning everything she can, with severe consequences if she can’t catch on fast enough. Because of this gulf between her and the other students, watching connections and friendships form was more unique than we might usually expect from a story with a similar premise, mostly because of the inherent distrust between the students based on social structures and the violent skills they’re learning. November’s closest ally is her roommate Layla, who is astute and sharp and cunning, but doesn’t hold friendships at the same value level as November, and therefore the readers, do. Because of this, watching their social interactions (along with the social interactions between November and Layla’s brother Ash, who may or may not be hiding his own motivations) was fascinating and rewarding as they slowly unfolded, in spite of the inherently distrustful setting of the school. Along with that I liked how the underlying social structures of this school worked. It’s a bit of a spoiler to go into it in too great of detail, but think of it like Hogwarts Houses, but revved up rivalries to deadly degrees. Throw in some good old fashioned blood feuds and you have for a plot line that I could sink my teeth into.

I think that the biggest drawback, however, is that while Mather is great when it comes to building these foundations and relationships, the main question of who is trying to hurt November and why didn’t pull me in as much. I cared about her as a character and wanted her to be safe, but I didn’t feel all that invested in who the killer at the school was, and why they would be going after November specifically. It wasn’t even that the ultimate solution was bare boned or too predictable; it was well plotted out and I found it to be believable as well as a surprise. It was just that ultimately, this plot wasn’t where the storytelling was richest for me. I liked the characterizations and the world building far more than the main plotline of this first book. My hope is that, should this series continue, in the next books with all the world building and November’s alliances and trustworthy cohorts established (as of now), I will be more interested in the twists and turns that are thrown into whatever adventure she and her classmates go on next.

“Killing November” has some very solid promise to be a fun new series from Adriana Mather. And while I’m still waiting for the next “How To Hang A Witch” book, I can now add the next “November” book to my list of anticipated reads!

Rating 7: With interesting characters and a compelling background story for the school, “Killing November” has promise, even if the main mystery didn’t grab me as much as I’d hoped it would.

“Killing November” is included on the Goodreads lists “Months of Days in the Book Title”, and “March 2019 Book Releases”.