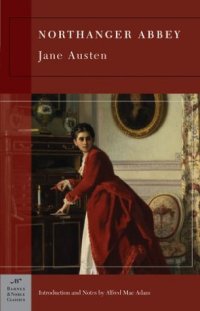 We are part of a group of librarian friends who have had an ongoing bookclub running for the last several years. Each “season” (we’re nerds) we pick a theme and each of us chooses a book within that theme for us all to read. Our current theme is ‘Books On Our To Read Shelf’, where we pick books that we’ve been meaning to read but haven’t gotten to.

Where Did We Get This Book: eAudiobook from the library,

Book Description: Jane Austen’s first novel—published posthumously in 1818—tells the story of Catherine Morland and her dangerously sweet nature, innocence, and sometime self-delusion. Though Austen’s fallible heroine is repeatedly drawn into scrapes while vacationing at Bath and during her subsequent visit to Northanger Abbey, Catherine eventually triumphs, blossoming into a discerning woman who learns truths about love, life, and the heady power of literature. The satirical novel pokes fun at the gothic novel while earnestly emphasizing caution to the female sex.

Unlike Serena, I am not as well versed in Jane Austen stories. I’ve read “Emma” and “Sense and Sensibility”, and I’ve read “Pride and Prejudice and Zombies”, which admittedly probably doesn’t count. So when book club picked “Northanger Abbey”, I was both a bit excited but also a little apprehensive. I’m always looking to expand my ‘classics’ experience, as that’s admittedly a huge gap in my reading, but one of my biggest hangups with Austen is her writing style. But I got the audiobook from the library, and jumped in.

While I did have problems with the writing, overall I enjoyed “Northanger Abbey”! Given that I quite like Gothic novels (“Jane Eyre”, anyone?), it was kind of fun seeing a gentle satire/ribbing of the genre with Catherine Morland’s imagination running away with her. Given that Gothic novels are incredibly melodramatic it was quite amusing seeing Catherine look for the melodrama in her life, even when there really wasn’t much to be had, at least not in the ways she expected. Catherine herself is a pretty enjoyable protagonist, as she is sometimes flighty and naive, but always has a good heart in place and ultimately is good to other people. I can’t say that I was super invested in her relationship with Henry Tilney, but I did like their witty banter. I was far more invested in Catherine’s friendship with his sister Eleanor, and her frenemy relationship with the vapid and self centered Isabella (side note: Isabella and her dumbshit brother John are fun to hate as villains, and because of that I GREATLY enjoyed them and their nasty scheming). Catherine’s maneuvering through romantic and platonic relationships composed the true heart of this story, and I was definitely rooting for her.

I was also really tickled to see so much of this story took place in Bath, if only because I really enjoyed Bath when I went there. It was also neat to see that some of the tourist-y things to be done in Bath today, like visiting the pump room, were part of the tourist appeal back when this book was written! It’s funny to see how things can endure over time, whether it be a tourist attraction or the appeal of a novel.

But like I mentioned above, I did have a hard time with the writing style. I usually try to read ‘classics’ by listening to them on audiobook, as for some reason listening to the writing is easier for me to process that way. With “Northanger Abbey” this mostly worked, but I still found my mind wandering as I listened. Given that I’ve had success with this when reading other ‘classics’, I do think that had the plot been more to my liking, I may not have had as large of a problem keeping interested. This, however, is probably more a comment on my own personal hangups than the book itself.

“Northanger Abbey” hasn’t necessarily made me want to run out and read all the rest that Jane Austen has to offer, but as I slowly chip away at her work I can see why she has endured.

I’ve read all of Jane Auten’s works, most of them twice. “Northnager Abbey,” however, is one of the few I’ve only read the one time, so I was also super excited when this was selected as a bookclub pick. Most of Austen’s other titles serve as comfort reads of some sort or another, depending on the mood I’m in and the type of romantic hero I’m craving. But for some reason I haven’t had this one in my rotation, though I do re-watch the BBC movie of it fairly regularly.

In many ways, this book is very different from Austen’s other works. It is one of her earliest writings (though it was published later, after her death), and you can see the building blocks in development with this work. Her villains are a bit more obviously “villain-y”: the Colonel with his strict meal times, Isabella with her contradictions and manipulations. The comedic characters play almost only for that, like Mrs. Allen’s obsession with clothes. And Tilney & Eleanore are simply good people all around. They all play their parts perfectly, but when compared to Austen’s other characters of the same type, one can see that these first attempts are a bit more bland and one-note. In “Pride and Prejudice,” for example, Mrs. Bennett is both a comedic character but also one that is pitiable for the situation she finds herself in, one that she is completely unable to handle (a questionable future and five daughters whose options are limited).  So, too, Mr. Darcy is both a romantic hero but also flawed man.

Catherine, as the heroine, is given the most fully fleshed out character. One of the lasting appeals of Austen’s work, I believe, is the way she captured the core of people, traits that carry on throughout the ages, regardless of many cultural or societal changes. Catherine, for instance, reads as a very believable seventeen year old girl. She’s a good person, but is prone to flights of dramatics, wishing to make her life more like the ones she reads about, seeing intrigue and mystery where there is none. She is also easily attracted to those she perceives as having more confidence than herself, like Isabella. And while never lead completely astray from the solid foundation of principles that make up her person, we see her fall under the sway of a “popular girl” who is going about life in a very different way than Catherine even understands.

As Kate mentioned, the most unique aspect of this book is the fact that it is a straight satire of the popular Gothic novels of the time. Every character choice and plot point holds in direct contrast to the dramatic events taking place in those books. Tilney is simply a good person (a very good person, given how gently he handles Catherine after she lets her imagination take her a bit too far at one point), with not flights of brooding or penchant to unnecessary dueling. Northanger Abbey itself is simply a home, most notable for being cozy and done up to the latest styles. Catherine’s family are all alive, most notably her mother, a character that even in Austen’s time was often killed off early in the story (Disney and many other YA stories still lean heavily on this trope). There are also several lines where Austen directly references other books and statements from authors that, for the curious reader, are fun rabbit holes to go down on one’s own time.

I very much enjoyed re-reading this book. The piercing take-downs of the tropes often found in Gothic fiction are on point, the story itself is sweet, and Tilney and Catherine are heroes you can’t help but root for. While the story and character portrayals are a bit more simplistic than what we see in Austen’s later work, you can clearly see the foundation that is being built in this first work.

Kate’s Rating 7: I liked the protagonist and the fun satire of Gothic novels, but the writing of the time period has never been my cup of tea.

Serena’s Rating 8: The most straight-forward of Austen’s books, this is a fun read though not as fully engaging as her other novels.

“Northanger Abbey” is included on the Goodreads lists “Best Books For Girls Who Belong to Another Era”, and “Fictional Crushes”.