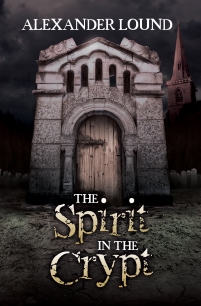 Book: “The Spirit in the Crypt” by Alexander Lound

Where Did I Get This Book: The author sent me an eARC.

Book Description: When fifteen-year-old Jonathan Roberts goes out with his friends on a summer night, he doesn’t expect to be forced to enter a crypt by Francis Everton. To be forced to look at skeletons decaying in their graves.

To hear the voice, screaming at him. Screaming into his mind. Commanding him to leave.

What the voice in the crypt belongs to, he can only wonder. A demon? A ghost? It gives him nightmares for weeks afterwards. Of skeletons strangling him. And then, bizarrely, of a girl from his school, making the long walk across the graveyard and entering the crypt. Never to come out before his waking.

When he returns to school in September, he never expects to learn that something awful has happened to the girl, turning his fear to panic.

Panic which will force him to unravel the mystery of the crypt, and in doing so, many mysteries about himself.

Review: Thank you to Alexander Lound for approaching our blog and sending me an eARC of this book!

It’s been a little bit since I read a good old fashioned angry ghost story, and luckily I didn’t have to look far. I was approached by YA author Alexander Lound to see if I’d be interested in reading his new book “The Spirit in the Crypt”, and by the time I was diving in I realized that I had been in a serious mood for a story such as this. It checks off the boxes of subgenres in horror that I greatly enjoy: it has an angry ghost, it has a cute romance, and it has a psychic/medium theme to it. Add in some gloomy weather in my neck of the woods and it’s a perfect atmosphere to indulge in a spooky story!

What I liked most about “The Spirit in the Crypt” is that Lound makes his main character Jonny a pretty realistic teenage boy. While he definitely stands out from other kids his age in some ways, in a lot of other ways he ultimately wants to live a normal life and has the kinds of flaws you see in a lot of kids like him. From making questionable friend decisions to making impulsive choices, there were plenty of times where I wanted to smack him upside the head, but also could see a lot of realism within him. After he’s found himself pulled into a supernatural mystery, starting with an encounter in a crypt and escalating as he starts to see visions of children who have ended up in unexplained comas, Jonny has to look into himself and find out how he’s connected, and how far empathy will take him. Another aspect I liked about his character development was that not only was it about him figuring out his own supernatural abilities, but also learning about the power of empathy for those who have been victimized. Though there are a number of interesting ways this manifests, for me the most rewarding was when he befriends a girl named Cassy, who was the target of some pretty terrible sexual harassment at the hands of her ex boyfriend, who also happened to be a friend of Jonny’s for a time. Seeing Jonny have to reconcile the fact he’d shrugged off the abuse (never supported it or encouraged it, but didn’t discourage it either) was an arc that we’ve seen before (and frankly can be seen as frustrating when it’s framed as ‘he sees her as a person now that he’s gotten to know her and learned why he was wrong!’). But I felt that the way it developed and progressed in this story was more palatable if only because their friendship is definitely based on more than Jonny learning a lesson.

I’m also just a huge sucker for stories about mediums and ghosts. Jonny is taken under the wing of a psychic named Aaron, and they have to work together to figure out why this mysterious (and super pissed) ghost is victimizing kids. It also has a huge focus on Jonny himself learning about his own powers in this way, and boy oh boy do these kinds of stories really hit all my genre buttons! From seances to visions to exploring the true motivations behind the angry ghost, I was pretty hooked as I read this book. I also like it when an author or storyteller tries to give more depth to an antagonist, especially a ghostly one, and in this story there is a lot of background and reasoning that comes to light that makes the plot feel like it has more weight, both in a complexity sense and an emotional sense. I won’t spoil anything here, but I was pleasantly surprised with how much we got to learn about the titular spirit.

Was this book particularly scary? Perhaps not so much to me, but I’m old hat at this genre and it kinda takes a lot/very specific things to get me creeped out. But I think that for teens this is probably going to be a good match for levels of fear, as it does have its moments of creep factor in it. Because honestly, while I wasn’t particularly scared, I did find myself rather unsettled about being locked in a crypt, ghostly presence or not.

All in all, I thought that “The Spirit in the Crypt” was a fun read! I’m pleased that it showed up in my inbox, and given that it sounds like the start to a series, I can absolutely see myself reading the next one!

Rating 8: A fun and satisfying YA ghost story with a likable protagonist and the kind of story that I just love: mediums and angry ghosts.

“The Spirit in the Crypt” isn’t on any Goodreads lists, but I think that it would fit in on “YA Novels and Psychic Abilities”, and “Young Adult Ghost Stories”.

“The Spirit in the Crypt” isn’t available on WorldCat as of now, but it will be available for purchase in June. For more information, go to Alexander Lound’s WEBSITE.

2 thoughts on “Kate’s Review: “The Spirit in the Crypt””