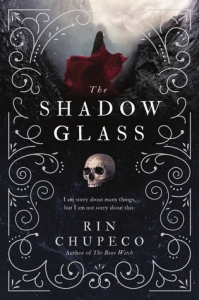 Book: “The Shadowglass” by Rin Chupeco

Book Description: Tea is a bone witch with the dark magic needed to raise the dead. She has used this magic to breathe life into those she has loved and lost…and those who would join her army against the deceitful royals. But Tea’s quest to conjure a shadowglass—to achieve immortality for the one person she loves most in the world—threatens to consume her heart.

Tea’s black heartsglass only grows darker with each new betrayal. And when she is left with new blood on her hands, Tea must answer to a power greater than the elder asha or even her conscience…

Previously Reviewed: “The Bone Witch” and “The Heart Forger”

Review: Given the timing of when I started reading this series, I was able to get through the first two books quite close together. Which meant I had a long wait ahead of me getting to this one. And, since the storytelling presented in this book is broken into two portions, there were quite a number of cliffhangers and unresolved plotlines left dangling after the second book. All the more nerve wracking as I waited for this, the final book in the trilogy. And, well, I’m not sure that the extra time between reads worked in this book’s favor. Or perhaps I was already on a downward trajectory overall. Either way, unfortunately, I felt like this was a frustrating end to the series.

Things are finally starting to come ahead for both Teas, past and present. The past version of our main character is beginning to feel the walls close around her as one disaster after another seems to strike. Surrounded by a small band of loyal followers, she finds herself on the run from not only the elder Asha but entire nations. Driven by the knowledge that secrets about shadowglass and bone witches are being kept from her and the world, Tea goes on a path of discovery that will lead ultimately to her banishment and the death of many of her loved ones. Present Tea, on the other hand, has come fully into her own, surrounded by her powerful beasts and on a rampage throughout nations. Her plans are not fully clear, but it’s clear that those who stand in her way are not coming out of things on the winning side. Is Tea’s mission one of justice or is it simply the darkness inside of her fully taking control?

I’ve always found these books a bit confusing. The world-building is incredibly unique, and that’s a huge pro for the series. But there is something about its execution that doesn’t read clearly. The writing style, perhaps, leaves something wanting in the clarity department, and the choice to alternate between two story lines, each with its own complications and mysteries, doesn’t help matters. There are aspects of past Tea’s life that are referenced way back in book one, but aren’t answered until this, book three. That’s simply too long for me to have kept track of everything involved in the timeline, especially when all references made in the “present” timeline are obscured through the strange way that present-Tea is made to speak.

This has annoyed me from the start: Tea’s sudden tendency to rattle of pert little phrases of wisdom and mystery. It’s not a natural way to talk and reads in stark contrast to the past Tea who reads and speaks more like a typical person. The mode of present-Tea’s speech added extra layers of confusion to all of the references she made to events from the past. This being the case, as I was reading this book, I constantly felt like I was missing things. And then when I referenced back to the first book, I would fine that present-Tea has entirely misrepresented the situation, usually, again, with some type of unnecessarily cryptic remark. This made for an incredibly frustrating reading experience. I was lucky that I still had copies of the first two books on hand, but even so, I found this need to refer back very annoying.

I also had had some concerns from the very start about how well these two storylines would merge, and I was right to worry. Again, Tea’s sudden transformation from the past version of the character to the cryptic, almost all-powerful Tea of the present didn’t read as natural. Had the chapters been laid out in order, the jump would have been sudden and strange, and the fact that it was broken up over three books didn’t do enough to obfuscate the matter.

I was also unsatisfied with the reveals themselves. Like I said, there were about a million and one referenced mysteries that had been dropped throughout the first two books that needed resolutions here. But as these resolutions appeared, I found them increasingly annoying. Several of the referenced events don’t really make much sense and require characters to be willfully blind to some pretty basic facts to pull off. Tea’s own regrets and feelings of guilt also don’t make sense, now seeing some of these events play out. Everything just felt a bit off.

This feeling of being offkilter was all the worse because the bones (pardon the pun) of the story are still good. Like I said, the worldbuilding is incredibly unique, and I’m always going to applaud an author for creating a complicated world, magic system, and arc for her story. But the slight “offness” of everything, be it the writing itself  or the way the storyline actually unfurled, became increasingly hard to read as the series progressed.

Like I said, maybe the fact that I was able to read the first two books more closely together played in their favor. I definitely had to spent a lot more time reminding myself of a lot of details of this world, character, and story as I got into this book which made it hard to simply sink in and enjoy it. I also feel like the time away left me freed up to think more critically about the story and character arc itself, as well as be a bit more put off by the writing style.

This was a disappointing return to the series. Though, I will say that now that the series is complete, readers might have more luck and enjoyment if they are able to read all three books back to back. That mode of reading could play highly in the series’ favor, reducing the confusion of a returning reader and retaining the interest of readers across books. If you do like dark fantasies, I still recommend checking this series out, but definitely plan on reading them all at once. As for returning readers, your experience may be different than mine, but I was left disappointed by this conclusion, not because of the ending itself, but by basic mechanics of the storytelling that seemed to stand out in a more negative light in this book than they had in the first two.

Rating 6: For me, a disappointing end. The writing felt more strained and the storylines didn’t feel like they ultimately linked up together naturally.

“The Shadowglass” is on these Goodreads lists: “Asian Fantasy & Science Fiction” and “Speculative Fiction by Women of Color.”

Find “The Shadowglass” at your library using WorldCat!

One thought on “Serena’s Review: “The Shadowglass””