Ok. The days are getting longer. Easter is this month. Surely, surely spring is finally on its way! No, no, we DON’T want to talk about the blizzard that struck last April. And frankly, “April showers” even sounds fine by us. As long as the precipitation is in liquid form! As we patiently continue to wait for the return of the warm weather, here are some books we are looking forward to this month!

Book: “Through the White Wood” by Jessica Leake

Why I’m Interested: For one, look at that beautiful cover? You know I’m always a sucker for covers that don’t feature models, but this one in particular stands out with its deep blue tones and the striking white eagle. I’m pretty sure I requested this one based only on that cover. But the story itself also sounds intriguing featuring a young woman in Russia who has the ability to control ice. After tragedy strikes her village and she finds herself an outcast, she becomes caught up in a events taking place on a much grander scale where her abilities are not to be feared but instead could be the saving grace for her entire country. 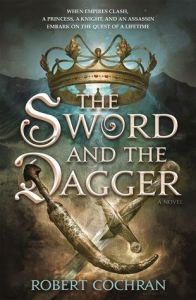 Book: “The Sword and the Dagger” by Robert Cochran

Why I’m Interested: Another intriguing cover, but I’ll admit to being drawn in mostly by the book description itself for this one. Set during the Crusades (in), an unlikely trio, a Christian princess, her fiance, and a Muslin assassin (definitely in), find themselves on a shared journey to intercept Gengis Khan (soooo in). That also all sounds completely bonkers, so I’m really curious to see where the story goes. Obviously, with the make-up of the group itself, I expect there will be a lot of conversations about faith, friendship, and loyalty, so I’m also intrigued to see how those aspects of the story play out. It seems like it could too much to tackle in one book (and of course I always have fears of love triangles with things like this), but I’ll remain optimistic.

Why I’m Interested: I’ve loved the first two books in the “Swords and Fire” trilogy, so it’s no wonder that this, the final book in the series would make its way on this list. One of the things that has impressed me most about this developing trilogy is how the stakes have risen with each book. That being the case, I’m so excited to see where this finale will take us! The groundwork for a huge conflict has been laid out, with Amalia and the fire warlock Zaira at its heart. But there are also political ramifications for society as a whole that have been building up: how will the lives of the bound Falcons look going forward? I’m also curious to see where Caruso will take the romances in this book. The second book pretty much did the impossible by introducing a love triangle that I didn’t immediately hate. But sticking the landing is everything for something like this, so we’ll just have to wait and see!

Why I’m Interested: It’s true that Sci-Fi isn’t really my bag, but I am a big fan of Mira Grant and pretty much everything that I have read by her. So I am more than willing to give “Alien: Echo” a try! When twin sisters Olivia and Viola move to a new planet colony with their xenobiologist parents, they expect it to be like other missions their parents have participated in. But when a new threat is found in the form of a new alien, and chaos suddenly takes hold, Olivia has to use her own knowledge of xenobiology to keep Viola and herself safe. Grant is always so creative with her world building, so I’m very excited and hopeful that “Alien: Colony” will be another fun ride from her.

Why I’m Interested: I’m a big ol’ sucker for a changeling story, so I of COURSE am very intrigued by the premise of “Little Darlings”. Lauren Tranter is the new mom of twins Morgan and Riley, and while she loves her babies she’s been worrying about them since their birth. While at the hospital she thinks she saw a woman try to take her children and replace them with two different beings, and while everyone thinks she imagined it, she’s been on alert. So when the twins disappear for a bit while she takes them to the park, her worst fears may be coming true. The twins, however, are recovered, but when they are returned to Lauren, she sees two babies that are not her children, even though everyone else thinks everything is fine. It sounds upsetting and creepy, and I can’t wait to see how it messes with my head.

Book: “The Invited” by Jennifer McMahon

Why I’m Interested: Jennifer McMahon has been pretty hit or miss for me in the past, but when she’s on she is ON. Because of this, I am absolutely going to see what she can do with a haunted house story like “The Invited”. Married couple Helen and Nate have left the city life in hopes of building a new life and house in the countryside. The property has a tragic past, in which a woman named Hattie died on the land a century prior. As Helen starts designing the house and it starts to go up, the tragic history of Hattie and her descendants starts to be uprooted in more ways than one. A haunted house you move into is one thing, but it’s a pretty fascinating idea to be building a house that appears destined to be haunted.

What April new releases are you looking forward to? Share in the comments below!