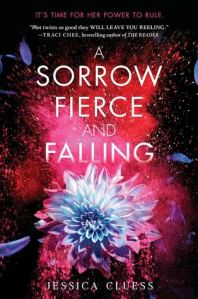 Book: “A Sorrow Fierce and Falling” by Jessica Cluess

After suffering terrible losses, Henrietta and Lord Blackwood have led their warriors to Sorrow-Fell, a vast estate where only those invited by a Blackwood may enter–and the ideal place to plan a final assault against the Ancients.

It’s time for a wedding.

Henrietta nervously awaits her marriage to Blackwood, but when the ritual to become his bride reveals a dark secret, she realizes that Sorrow-Fell is not a safe haven; it’s a trap. Convincing the sorcerers of this, however, is not easy. So with Maria, the true chosen one, and Magnus, the young man who once stole her heart, at her side, Henrietta plots a dangerous journey straight into the enemy’s lair. Some will live. Some will die. All will be tested.

In this stunning conclusion to the Kingdom on Fire series, Henrietta must choose between the love from her past, the love from her present, and a love that could define her future. While battles rage, the fate of the kingdom rests on her decision: Will she fall or rise up to become the woman who saves the realm?

It’s time for Henrietta to make her stand.

Previously reviewed: “A Shadow Bright and Burning” and “A Poison Dark and Drowning”

Review: This trilogy has traveled an odd trajectory as far as my feelings for a book series go. I was underwhelmed by the first book, a bit put off by the sheer number of love interests who were introduced. The second one fared better, expanding the world out by quite a bit, upping the ante with the villain, history, and Henrietta’s true role in all of this. And then this one…just kind of threw out a lot of different things and saw what stuck, essentially? I’m not even sure! I’m still experience a bit of whiplash from it all, but I don’t think I liked it, in the end.

Events had been coming to a head at the last book, not least of which saw Henrietta agree to marry Blackwood. However, now, as events continue to spin out of control, Henrietta is forced to re-examine all that she thought she knew about those around her. And with new revelations come new choices, each with their own prices to be paid. Surrounded by her friends and facing new and terrible dangers, Henrietta must face her final challenge.

So, as usual, I’ll try to start with some things I enjoyed about this book. The one consistent thing throughout this series that I have liked has been the general writing style. There’s a nice mixture of interesting turns of phrase alongside stark, to-the-point writing that solidly carries the story along. For the most part, purple prose, of the like that can all too often pop up in YA fantasy that has a strong emphasis on romance, is largely avoided. I also listened to this one on audiobook again (which I did for the second book, too) and enjoyed the narrator’s interpretation of characters. I remember thinking that my increased enjoyment of the second book could have something to do with this change of format. And I now have to think that continuing my read of this series using this format was a wise choice, as I’m not sure I would have made it through this one without the increased enjoyment of the audio narrator.

I also generally still enjoy the world-building. There have always been a plethora of creative ideas at the heart of this story. And I’ve also appreciated the way the author has walked right up to the horror line with many of her villains, making them truly horrible. Much of that still continues here, though it did start to feel overly crowded and muddled at times. It’s only been a year since I read the last book, but there were times where I was still struggling to remember how some of these elements worked together and what there histories were.

However, other than those points, I really had a hard time with this book. I’ve never loved Henrietta as a character, but I also didn’t have any overt issues with her. I was particularly intrigued by the second book where we were introduced to Maria, the “real” chosen one. But here, Henrietta went from blandly ok to outright unlikable. We’ve had three books now to witness her making mistakes as she discovers herself and her role in this conflict. And that’s fine. But by this point, we need to start seeing the growth that comes out of those mistakes. Instead, if anything, Henrietta becomes more indecisive and makes even more nonsensical choices than we’ve seen in the past, often to disastrous results. It makes her not only a frustrating character to read, leaving the reader feeling like the character hasn’t grown at all over two entire books, but this weakness of character was necessary to drive much of the plot, as it revolved around said poor decision making and the results therein.

And, lastly, the romance was a huge problem for me. This has been the biggest question mark for me throughout the entire series. From the very beginning I had huge red flags going up regarding the sheer number of love interests that were introduced. We were way past love triangle and into the realm of love square or even more. It was always too much. As the story progressed, I was mostly able to distract myself from my concerns in these areas. But not here. To finally resolve all of the dangling romantic threads, several characters had to be almost completely re-written. One in particular became almost unrecognizable and the change came out of left field. Beyond this, Henrietta’s reaction to this change was not appropriate, as the character essentially became abusive. There are so many layers of problems with this that I’m tired even thinking about it. Ultimately, it felt like the author didn’t know how to resolve (or even decide!) all of the romantic plotlines that were introduced. So instead of making her main character progress along a natural arc of self-discovery throughout the series that would result in her forming a realistic attachment to one character over the others, the author just got to the last book and decided to write off at least two of the choices, leaving Henrietta with only one viable option anyways. It felt lazy and like a slap in the face to readers. What exactly were we wasting our time on before this point if this is how it’s going to be ultimately resolved?

So, while the book did have some creative ideas with its world-building, in the end that’s all it felt like: a collection of ideas. Looking back over the trilogy as a whole, it looks like the work of an author badly in need of an editor. Everything and the kitchen sink went into this series and it shows worst of all in this last book when you can see the wheels coming off as the author frantically tries to resolve all of the elements that have been introduced (most poorly in the romance arena, perhaps). If you’ve enjoyed this series up to this point, I’m not sure how you’ll feel about this one really. It’s the kind of thing where some readers may really enjoy it and others will hate it, but it’s going to largely come down to what each reader was getting out of the series before and how they wanted things to turn out in the end. For me, it didn’t work and almost retroactively lowered the first two books as well, as it seemed to highlight that there was only ever a shaky overall plot from the very start.

Rating 5: A disappointing conclusion, most especially in the lazy resolution to the multiple love interests that had been introduced.

“A Sorrow Fierce and Falling” is fairly new and isn’t on any very relevant Goodreads lists, but it is on “YA Releases of October, 2018.”

Find “A Sorrow Fierce and Falling” at your library using WorldCat.

2 thoughts on “Serena’s Review: “A Sorrow Fierce and Falling””