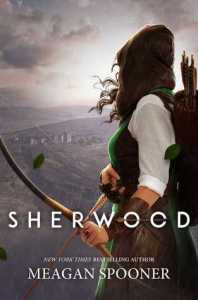 Maid Marian doesn’t know how she’ll go on, but the people of Locksley town, persecuted by the Sheriff of Nottingham, need a protector. And the dreadful Guy of Gisborne, the Sheriff’s right hand, wishes to step into Robin’s shoes as Lord of Locksley and Marian’s fiancé.

Who is there to stop them?

Marian never meant to tread in Robin’s footsteps—never intended to stand as a beacon of hope to those awaiting his triumphant return. But with a sweep of his green cloak and the flash of her sword, Marian makes the choice to become her own hero: Robin Hood.

Review: As I mentioned in my brief description of this book in our “Highlights” post for March, I was a big fan of Spooner’s wholly unique take on “Beauty in the Beast” in her YA novel “Hunted.” Now, obviously these two stories aren’t connected, but it is clear by the stylization of the cover art that we’re meant to make associations between the two: both feature a strong, independent female main character and both are reinterpreting a story in which that character had varying levels of agency. I’m definitely not one of those readers who subscribes to the whole “Stockholm syndrome” group fret about Belle/Beauty’s role in her story, but there’s no denying that “Hunted” gave this character a bunch more to do. And here, we have a legitimate side character in Marian being firmly placed in the lead role of the classic Robin Hood tale. It was great to see this book live up to the expectations I had placed on it given my feelings for “Hunted.”

Marian has made the best out of a bad situation: she loves her bow, fighting, and generally running wild and has very little interest or skill in the more “womanly” arts. Luckily for her, her childhood friend Robin has always been her partner in crime in these pursuits, and their engagement seems an obvious route to making the  best of out of an inevitable situation. That is, until he rides off to the Crusades and news reaches her of his death. Devastated by the loss, Marian still sees herself as responsible for the livelihood of the people living on both her own and Robin’s land and when the Sheriff’s taxes rise beyond reason, she finds herself donning not only male garb, but the persona of her deceased fiance, Robin of Locksley. Now, pursued by the Sheriff’s right hand man, a man whose desire to catch “Robin” is only matched in his wish to marry Marian, Marian must lead a double life, and one that can only have a catastrophic end.

I really enjoyed this version of Robin Hood. While I’ve read a fair share of stories that insert a female character as a stand-in for Robin, typically Robin himself is still present in the story, often the love interest. That being the case so much of the time, I truly didn’t trust the book description or the first chapter that laid out the concept that Robin died while at the Crusades. It was probably up until about half way through the book before I really let myself trust that he wasn’t going to just pop up. Not that I have a problem with the Robin character typically, but even by a quarter into the story, Marian herself and the way her story was unfolding was already so intriguing that any addition of the more famous Robin could have only detracted from her. Plus, as I said, in those past versions, even a Robin relegated to a love interest role often rubbed up wrong against what the author was trying to do with the actual main character who was supposedly supposed to be taking on the primary role in the action.

Marian was an excellent lead. Her grief for Robin’s death is real, and I appreciate that this wasn’t glossed over. Instead, we see how his loss affects throughout the entire story, first as a hindrance and further on as a motivation. Over time, she also has to re-assess what she knew about the man she was to marry. We, the readers, get a few extra glimpses into past moments between the two, and it is here, too, that we see small, but very important, differences being laid out between who this Marian and this Robin are compared to what we expect from the typical versions of the story. We also see the foundation for how Marian came to possess the skills necessary to take on the role she does here.

Wisely, Spooner leans in heavily to Marian’s skill with a bow, a talent that, while unusual, wouldn’t fall completely out of the realm of something a lady might have learned. Marian is also described as being exceptionally tall. But that aside, it could still have read as unbelievable for her disguise as a man to be fully bought by those around her had the author not carefully crafted every interaction that “Robin” goes into in a way that plays to hiding Marian’s identity. Indeed, Marian herself is written to understand the limitations of her disguise and to use every advantage she has to work within it, instead of breaking past it in ways that could have read as unbelievable and strange.

I also really enjoyed how many of the secondary characters came into play. Several familiar faces show up throughout the story, and each was given a few extra flares to make them stand out from the usual versions of the characters we’ve seen in other books. But I also really enjoyed the addition of unique characters (or at least vastly expanded upon versions of them). Marian’s father, maid, and horse master all were expanded upon quite a bit and I loved them all.

The most notable new addition, of course, is Guy of Gisbourne who is presented as both the villain and the love interest of the story. Again, because I was expecting Robin to pop back up at any moment, it took me a while to really figure out his role in the story. Thinking back, I tend to attribute this to an intentional decision on the author’s part as well, and not only my own skepticism of how the story was originally presented. Marian herself takes a long time to understand Gisbourne, what motivates him, where his moral compass points, and how he truly feels about her. Her own confusion translates perfectly to the reader. This is both a good and a bad thing. I love slow burn romances, and this is definitely that. But at times I think the book was almost too successful at selling me on Marian’s dislike of Gisbourne and his own coldness as a character. There are a few moments that are meant to show their gradual warming to each other, and they do work, for the most part, but I’m not sure it was ultimately enough. At a certain point, it did feel a bit like some type of authorial-driven light switch was just flicked in Marian’s head because it needed to be, rather than because it was earned.

So, too, her past relationship with Robin was also a bit strained. We only see a few glimpses here and there of their childhood and teenage friendship, but the scenes are all so strongly written and their connection so well established that it almost worked against the burgeoning romance with Gisbourne in a way that I don’t think was intended. I liked the idea of what we’re being told with regards to Robin/Marian/Gisbourne: that people are not always who we initially think they are and that love can present itself in very different ways with different people, and that these ebbs and flows don’t undermine one relationship or the other. But I’m just not sure the reader can actually see this message play out, so much as just be on the receiving end of being told.

Ultimately, I almost think it says even more positive things about the story that the downside I can mention has to do with romance and yet that downside in no way tanks the entire story for me. We all know that if you don’t get the romance right for me, often that can lead to my very much not enjoying a story. And here, it’s not that the romance was wrong, necessarily, just that I felt it was the weakest part of the story. But Marian herself, the reimagining of how the Robin Hood story would play out with her at its heart, the action, and the new characters all provided enough of a counter balance to my questions about the romance to lead me to viewing it with still a very positive light. Fans of Robin Hood re-tellings should definitely check this one out!

Rating 8: A bit muddled in the romance department, but an awesome female Robin Hood saves the day in the end!

“Sherwood” is included on these Goodreads lists: “Female Robin Hood” and “YA Modern Retellings.”