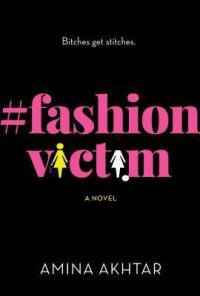 Book Description: Fashion editor Anya St. Clair is on the verge of greatness. Her wardrobe is to die for. Her social media is killer. And her career path is littered with the bodies of anyone who got in her way. She’s worked hard to get where she is, but she doesn’t have everything.

Not like Sarah Taft. Anya’s obsession sits one desk away. Beautiful, stylish, and rich, she was born to be a fashion world icon. From her beach-wave blonde hair to her on-trend nail art, she’s a walking editorial spread. And Anya wants to be her friend. Her best friend. Her only friend.

But when Sarah becomes her top competition for a promotion, Anya’s plan to win her friendship goes into overdrive. In order to beat Sarah…she’ll have to become her. Friendly competition may turn fatal, but as they say in fashion: One day you’re in, and the next day you’re dead.

Review: Even though on any given day you will probably find me lounging around my house in leggings and an oversized Sex Pistols tee shirt, I do have a certain pleasure for various aspects of the fashion industry. I used to watch “Project Runway” fairly religiously, loved the fashion shoots on old school “America’s Next Top Model”, and still enjoy seeing whatever nutty campaigns the likes of Gucci, Chanel, and Versace have going on at any given time. But it’s really an acknowledged fact that the fashion industry as a whole can be incredibly toxic and dehumanizing, so my enjoyment is probably fairly problematic. But toxic and dehumanizing means that it is ripe for the picking when it comes to satire, and that is where Amina Akhtar comes in. Akhtar used to be a fashion writer and editor, having been on the staff of such powerhouses and Vogue and Elle, but has now settled into the life of a novel writer. Her experiences I’m sure inspired her to write the deliciously named “#FashionVictim”. Just hearing about this book made me giggle with pleasure. Fashionistas resorting to murder to get ahead? I can’t get on board fast enough.

Our main character is Anya St. Clair, a fashion writer and associate editor who is at a prestigious fashion magazine called La Vie, who starts a killing spree in hopes of making it to the top. She’s obsessive and deranged, and her object of obsession is her colleague Sarah, the entirely unlikable poster child of the privileged fashion darling. Anya isn’t likable by any stretch of the imagination, but then, no one in this book is. After all, if you’re going to do a satire of the fashion industry, everyone needs to live up to the highest of stereotypes, so screeching and vapid bitches, both of the female and male persuasion, is the way to go. Anya is outwardly a perfect fit for this world, but in her mind lies a true maniac who idolizes Sarah yet despises her for the praise and accolades she has heaped upon her. Her inner monologue is frenzied and at times very funny, with delusions and intrusive thoughts intermingling with “Law and Order: SVU” trivia. Her drawn out massacre of those around her and those who get between her and what she wants (be it a promotion or the coveted BFF friendship with Sarah) is violent and jarring, but also has moments of gallows humor that you can’t help but laugh at, even if it feels kind of wrong to do so. “#FashionVictim” achieves the satirical levels that I’ve seen other books attempt, yet falter on. It digs its heels into the mess and violence, but at always feels like a nudge and a wink to the reader because the characters are such caricatures. And really, isn’t the fashion industry itself brutal and unforgiving in its own ways, pitting women against other women to do incredibly destructive things? Perhaps not murder. But destructive nonetheless.

But I think that as much as this is satire and a fun read, it doesn’t quite have the teeth that it could have had to really drive the point home. I think that because “#FashionVictim” is so over the top, you can say ‘oh, this is just a book, this could never happen in real life’. And while though the reader is in on the joke, I think that it could have been FAR more effective had it gone for a little bit of realism to go along with the satire. By being so out there and laughably ridiculous, it made it so that by the end I was less unsettled, and more ‘ha, what a romp’. That’s not a bad thing by any means, but it did make to so that it never quite made it to ‘great’ satire levels, and I think that it really could have gotten there had it not limited itself in such a way. I know that you’re all probably sick of my constant comparisons to “You”, but I think that kind of satire is stupendous BECAUSE you can see it happening in real life. While I don’t always need my satire to be based in realism, I do think that “#FashionVictim” could have had that extra oomph if it had stepped back just a little bit.

“#FashionVictim” was definitely a fun read, and I absolutely want to see what Amina Akhtar comes out with next. Go in expecting some bloody satire, but don’t expect to walk away totally creeped out.

Rating 6: Fun and dripping with satire, “#FashionVictim” was a breezy read, though I wish it had a little more creepy bite.

“#FashionVictim” isn’t on many Goodreads lists as of yet, but it is included on “2018 Books by Authors of Color/Native Authors”, and I think that if you want “The Devil Wears Prada” with a little more teeth it would be for you.