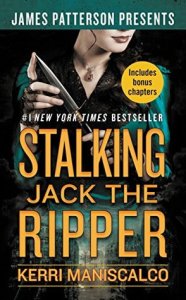 Book Description: Seventeen-year-old Audrey Rose Wadsworth was born a lord’s daughter, with a life of wealth and privilege stretched out before her. But between the social teas and silk dress fittings, she leads a forbidden secret life.

Against her stern father’s wishes and society’s expectations, Audrey often slips away to her uncle’s laboratory to study the gruesome practice of forensic medicine. When her work on a string of savagely killed corpses drags Audrey into the investigation of a serial murderer, her search for answers brings her close to her own sheltered world.

Review: I’m always on the lookout for another good historical mystery series. While I have several that I’m currently following, there’s always room for more! I’d seen this title floating around in a few discussions with other fans of historical mysteries and was intrigued by not only the concept (while I’m not at Kate’s level of knowledge of famous serial killers, we all know about Jack the Ripper!), but also by the fact that it was  YA series. So off to the library I went where I was pleased to find a lovely audiobook version ready and waiting!

Ever since her mother’s death, Audrey Rose has turned to science to understand the world. Under the tutelage of her eccentric uncle, she has learned the ins and outs of anatomy and even begun conducting procedures herself. But what began as a pursuit of knowledge turns a deadly angle when a streak of murders of women hit London. Called upon for the forensic knowledge, Audrey Rose, her uncle, and his apprentice, the irritating but handsome, Thomas, are pulled into the dark and disturbing mind of a mad man. And as they begin unraveling the crimes, Audrey Rose begins to suspect that the mysterious “Jack” may be stalking them, in turn.

So, right off the bat, this is going to be a mixed review. On one hand, I genuinely enjoyed reading this book and whizzed through it quite quickly. But on the other side of things, once completed, I found myself looking back on many aspects of the storytelling with some dissatisfaction. But, as always, we shall begin with the strengths!

One of the things that intrigued me most about this book and series was the combination of a historical mystery based on a real-life crime spree and the young adult genre. I’ve mostly read adult historical mysteries in the past, and it’s pretty obvious that fantasy, and now to some extent contemporary fiction, is still dominating the YA genre. Historical mysteries/thrillers are hard to come by! And I do think the author managed to pull off the merging of all of these elements quite well. For fans of historical mysteries, there were familiar elements in the detailed depiction of the time period and the creation of a romantically-tinged buddy cop duo in Audrey Rose and Thomas. The mystery was solid enough, probably enhanced mostly by its connection to the true crimes, and it walked right up to the horror line, if not crossing it a bit towards the end in a surprisingly gruesome manner. And for YA fans, Aubrey Rose and Thomas checked most of the boxes for what readers expect from their teenage protagonists.

This horror aspect and the reveal at the end of the murderer and their motivations was also one of the strongest aspects of the book. While I felt that the identity of the murderer was telegraphed fairly early on, the motivation came as a complete surprise and the manner of its explanation and end game was particularly horrific. There was almost a cross-over with another famous story in a way that I hadn’t been expecting at all.

The writing was also snappy and quick-moving, with the dialogue between Aubrey Rose and Thomas rising to the top as often particularly enjoyable. However, here was also where I began to struggle with the story. There was something verging on anachronistic in the relationship and mode of speaking that was built up between these two. As I said, this type of buddy cop/romantic relationship is fairly standard for historical mystery fare, and often that involves a rather progressive man and woman at its heart. However, here, there were a few elements that pushed this typical pattern over some unseen line in my mind. Part of it could have to do with their age. For example, both Veronica and Amelia were independent, fully grown women when they set off on their adventures. Age, experience, and, importantly, financial and social freedom that was rarely seen in the time, allowed them to interact with others and the world in the way they did. Aubrey Rose is still quite young, not even “out” in society, and still a member of her father’s household. This then ended up rubbing up wrongly against some of her choices and ways of speaking, especially in her interactions with Thomas.

So, too, Thomas’s flirty and sarcastic way of speaking was also hampered by not only his relatively young age, but also the fact that he was supposedly raised to be a gentleman and was interacting with a young, often unchaperoned, girl. This left some of his more suggestive remarks reading not as the fun flirtation that I’m sure they were meant to portray, but instead as rather boorish and unflattering. All together, it was the kind of an odd, unhappy mixture of modern YA romance tropes on top of a historical setting that isn’t equipped to manage those tropes in the same way.

Further, while I generally enjoyed Aubrey Rose as a character, she did have her fair share of really poor decision making and thinking. And while these flaws were often made clear to her, eventually, it was still a frustrating read at times when aspects of the mystery were only too clear to readers, but Aubrey Rose, through plot necessity, was forced to remain and act clueless. In this same way, her interactions with Thomas became equally frustrating as she insisted on “misinterpreting” his flirtations throughout the entire book, even when those same flirtations became almost inappropriately obvious.

In the end, it was a bit of a mixed bag. I really enjoyed what the author was attempting to do, and I think she should be applauded for managing to merge so many genres together. However, this same merging of genres also let the author and the book down at times when tropes from each didn’t play well together. But, as I said, I also whizzed through this book quite quickly, so I still plan on checking out the next in the series. We’ll evaluate again from there! Fans of historical mysteries may want to check this series out, but if you’re not a fan of YA fiction to some extent, you may be frustrated by some of those elements.

Rating 6: A fast-paced, fun read, just try not to think about it too much afterwards though or you may become frustrated.

“Stalking Jack the Ripper” isn’t on many Goodreads lists for some reason, but it is on  “YA Fiction set in the 1880s.”

Find “Stalking Jack the Ripper” at your library using WorldCat!