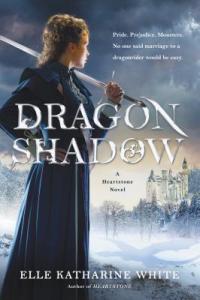 Book Description: The Battle of North Fields is over—or so Aliza Bentaine, now a Daired, fervently wants to believe. But rumors are spreading of an unseen monster ravaging the isolated Castle Selwyn on the northern border of the kingdom. When she and Alastair are summoned from their honeymoon by the mysterious Lord Selwyn, they must travel with their dragon Akarra through the Tekari-infested Old Wilds of Arle to answer his call.

And they are not alone on this treacherous journey. Shadowing the dragonriders is an ancient evil, a harbinger of a dark danger of which the Worm was only a foretaste. And soon Aliza realizes the terrible truth: the real war is only beginning.

Review: “Heartstone” was one of those unicorns of a book that was marketed as a retelling of “Pride and Prejudice” and actually managed to not only not disappoint but also hold its own as a solid piece of fantasy fiction, regardless of comparisons to beloved classics. What made it so special was the author’s ability to perfectly balance retaining the basic elements of the original story while not feeling bound to hit every beat or even exist in a world that looked very similar. I mean, the Mr. Darcy character rides a freaking dragon in this book! And “Elizabeth”  helps kill a gigantic, beastly worm. Your typical  Jane Austen re-telling this is not. This all left me in a strange state when I saw that there was a sequel. For one thing, the first book wrapped up so nicely that a sequel was by no means necessary. And for two, would the author be able to manage this again? Well, never fear, readers, “Dragonshadow” is proof that “Heartstone” wasn’t just a lucky hit, but evidence of a strong author with a clear story on her hands.

Aliza and Alastair have been on their honeymoon. But as enjoyable as it is, inevitably, it must come to an end. And with this change comes the stark reality of the life that Aliza has signed up for: not being a Rider herself, she is destined to remain behind, alone in a large house she is meant to run, knowing her beloved husband is battling danger at every turn. She quickly realizes that this is unacceptable. So now, together, she and Alastair and his dragon Akarra set out on a new adventure, one riddled with danger at every turn and a mysterious force pulling the strings from behind the curtains.

Well, I just loved this book. And what I most loved about it was the fact that it went in directions I never would have expected. I am going to do a bad thing now and compare this book to another Jane Austen retelling (of sorts), but it’s another one of the few examples of these types of books that I think succeeds. “Death Comes to Pemberley” by PD James is essentially a mystery novel that also serves as a sequel to “Pride and Prejudice.” It features a murder mystery at Pemberley, but also dives into Elizabeth’s experiences after the wedding, now mistress of a large estate. Like that book, “Dragonshadow” does an excellent job looking past the “happily ever after.” Both Elizabeth and Aliza are in worlds that are unfamiliar, that they were largely unprepared to enter, and that naturally bring out many insecurities into their own roles and the strength of their relationships with their husbands.

While Aliza played a major role in the action of the first book in this series, it was clear that her choices were largely driven by extraordinary circumstances. An unbeatable foe was on the move, Alastair was dying slowly of poison. Her actions were a last resort, not a natural next step for a character who grew up with no battle training herself. And here, we see how these realities play out, her now being married into a family of warriors. So much of her arc here is just excellent, from her pushback against expected roles put upon her, to the still very true realities of her inexperience and lack of preparation to participate actively in Alastair and Akarra’s world. Alastair’s reactions are equally compelling. He makes several “wrong” choices, but also is largely right in his fears. Aliza, and his love for her, is not only incapable of taking care of herself, but is also a risk for him as a distraction. That said, her insistence to be more than a lady waiting at home isn’t wrong either. It’s exactly the kind of complicated, both sides are right/wrong situation that provides a rich reading experience.

I also greatly enjoyed the action of this book. We’re exposed to a wide variety of the different magical  beings that make up this world, and much of the politics and interactions between their species and how they interact with humanity is explored in a bigger way than the first book’s “big, bad, monster.” Importantly, the wide swath of grey and neutral roles that exist between the building sides in this larger conflict are explored in great detail. There were some excellent surprises, especially towards the end, and I particularly enjoyed how Aliza’s strengths were used to suss these things out. While not a fighter, she was able to prove her worth in other ways.

I was also very surprised by another element added to the story about halfway through. At first, my kneejerk reaction was negative as it seemed to be following (or introducing) a fairly typical romance novel trope that I’ve never particularly enjoyed. But instead, the story veered wildly into a topic that is rarely explored in many novels, let alone fantasy fiction. And the delicacy and care that was shown to a particularly challenging subject was lovely to see. In the end, I have to greatly applaud the author not only for choosing to include this difficult topic, but for handling it so well.

“Dragonshadow” was exactly the sequel I didn’t know I needed. In many ways, it makes “Heartstone” read as a bit simplistic. There’s a compelling mystery, dangerous action, an incredible character arc for both of its main characters, and the exploration of deeper topics such as love, loss, and the choices that these greater forces inflict upon us. Fans of “Heartstone” should definitely check out this novel. And new readers should definitely get their hands on the first book, knowing that it is just the beginning!

Rating 9: An excellent, unexpected sequel that raises the stakes in every way: action, topic complexity, and characterization.

“Dragonshadow” is a newer title, so it isn’t on many Goodreads lists. But it is on “Best Pride and Prejudice Sequels/Variations/Adaptations.”