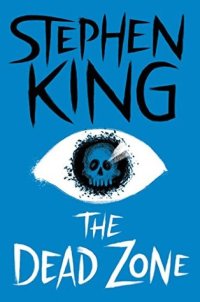 Where Did I Get This Book: An audiobook from the library!

Book Description: When Johnny Smith was six-years-old, head trauma caused by a bad ice-skating accident left him with a nasty bruise on his forehead and, from time to time, those hunches…infrequent but accurate snippets of things to come. But it isn’t until Johnny’s a grown man—now having survived a horrifying auto injury that plunged him into a coma lasting four-and-a-half years—that his special abilities really push to the force. Johnny Smith comes back from the void with an extraordinary gift that becomes his life’s curse…presenting visions of what was and what will be for the innocent and guilty alike. But when he encounters a ruthlessly ambitious and amoral man who promises a terrifying fate for all humanity, Johnny must find a way to prevent a harrowing predestination from becoming reality.

Review: During the Great Stephen King Binge of Eighth Grade, I hit a lot of classic King stories that have endured the test of time. But interestingly enough, one of the titles I skipped during that time was “The Dead Zone”, King’s fifth book (not including a few he wrote under Richard Bachman), and therefore still SUPER early in his writing career. It’s also one of his first books in Castle Rock, now a staple setting for a lot of the King Mythology. Looking back I have no idea why I skipped it; it’s about a man who becomes a psychic after an accident and has to deal with having horrible visions as well as deal with how his new powers affects his relationships. Perhaps at the time it sounded too tame, but now I know that psychics are some of my favorite tropes in dark fantasy/horror/what have you. Suffice to say, I decided to give it a go, and now I am sorta kicking myself for waiting so long to pick it up. Because not only does “The Dead Zone” include one of my favorite tropes of all time, it also has a villain that feels incredibly relevant to today: a malignantly narcissistic politician who garners a fervent following in spite of (because of?) his brash, callous, and cruel nature and false promises.

John Smith is our protagonist, a humble and serious school teacher who, after a car accident that leaves him in a coma for years, suddenly gains the power to touch someone or something, and get an impression about the past, or the future. King writes John in the way that I think most people would be if they gained this power: unhappy with the burden of it, but also unable to make himself ignore it should the consequences be grave and also potentially malleable. While this is a fairly standard recipe for modern ‘psychic who wants to be normal’ characters, John was probably one of the earlier iterations of the now familiar trope, and I enjoyed watching his character have to grapple with the responsibility. While it may feel a little old hat now, when this book was published in 1980 I wonder if the idea of ‘reluctant psychic’ was as prevalent as it is now. King really emphasizes the pitfalls of this gift, be it because of people who will harangue you as a fraud, or the people who will be desperate for you to give them answers to things that may not have easy, or wanted, solutions. Multiple times John has to weigh the pros and cons of telling people what he has seen, and King makes it clear that the emotional exhaustion and fallout oftentimes takes serious tolls on him. There are multiple moments in the story where I felt so badly for John, because he gains very little from this gift, even when it does positive things. In fact, if he does predict an outcome, usually those he helps are then completely terrified of him because of his supernatural abilities.

But I think that while John is a perfectly fine person to follow, I believe that the greatest strengths in this novel are the supporting cast of characters, in particular John’s old girlfriend Sarah, and the villain of the piece, Greg Stillson. Sarah and John are very tragic in a muted way, as while John survived the crash and eventually did wake up, Sarah, assuming he never would, moved on with her life. She has a husband and a child by the time John wakes up, and while she never stopped loving him she thought that she could never actually be with him. When confronted with the reality of what COULD have been is desperately sad. But at the same time, Sarah isn’t mired down by her sadness. I like that she takes the agency and little control she does have over the situation and is able to find closure in some ways (though admittedly I did roll my eyes a little bit at one aspect…. It felt weird and schmaltzy, but no spoilers here). She is a very steadfast character who feels deeper than just the old girlfriend who has lingering regrets. However, the strongest supporting character is assuredly Greg Stillson, the aforementioned politician whose power comes from a slowly growing cult of personality. Stillson and John spend much of the novel separate, but while we see John’s eventual rise as a reluctant psychic, we see Stillson’s rise in the political world (gains made mostly through violence, extortion, and intimidation). While I was at first wondering just where Stillson was going to come into all of this (as I went into this book with very little knowledge about it), King does a great job of carefully and slowly bringing them together at the most critical time in the novel. By the time John and Stillson do meet on the page, you have been given enough info about both of them that you know it’s the meeting of two powerhouses in their varying ways. Stillson scares the hell out of me, if only because Stillson feels like our reality…. Except there was no reluctant psychic to step in and stop his mad reign.

I listened to this on audio, and oddly enough it was read by James Franco. My guess is this was recorded around the time he was starring in “11/22/63” and the tie in was too good to pass up, but while it was odd to hear him at first he did a pretty okay job with the material. He varied his voices appropriately and emoted enough without feeling over the top. He’s no Will Patton, but I was overall satisfied with how he did (though, hilariously, one of the characters calls for a Polish accent, and so I just kept imagining Franco as Tommy Wiseau in “The Disaster Artist” whenever the Polish Neurologist was around).

“The Dead Zone” was a dark and unsettling novel, but it is SO classic King that my nostalgia meter was off the charts. While it felt a little too real at times, I greatly, greatly enjoyed finally reading it.

Rating 8: A classic King book with a newly relevant feel, “The Dead Zone” is an unsettling read.

“The Dead Zone” is included on the Goodreads lists “Theological Weird Fiction”, and “Conspiracy Fiction”.

Find “The Dead Zone” at your library using WorldCat!