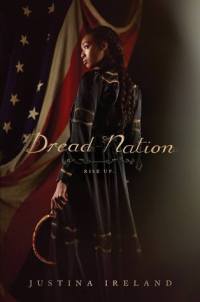 Book Description: Jane McKeene was born two days before the dead began to walk the battlefields of Gettysburg and Chancellorsville—derailing the War Between the States and changing America forever. In this new nation, safety for all depends on the work of a few, and laws like the Native and Negro Reeducation Act require certain children attend combat schools to learn to put down the dead. But there are also opportunities—and Jane is studying to become an Attendant, trained in both weaponry and etiquette to protect the well-to-do. It’s a chance for a better life for Negro girls like Jane. After all, not even being the daughter of a wealthy white Southern woman could save her from society’s expectations.

But that’s not a life Jane wants. Almost finished with her education at Miss Preston’s School of Combat in Baltimore, Jane is set on returning to her Kentucky home and doesn’t pay much mind to the politics of the eastern cities, with their talk of returning America to the glory of its days before the dead rose. But when families around Baltimore County begin to go missing, Jane is caught in the middle of a conspiracy, one that finds her in a desperate fight for her life against some powerful enemies. And the restless dead, it would seem, are the least of her problems.

Review: Zombies have been a genre trope of choice for awhile now in horror fiction. They are usually used to show that in a world of zombies, humans are still the real monsters, and that’s a theme that I enjoy no matter how often it is invoked. But the thing is, zombies are starting to feel a bit stale. With “The Walking Dead” hemorrhaging viewers and post apocalyptic horror movies choosing to go other routes, the zombie story has needed a jolt for awhile now to, uh, revive it. So that is probably why I enjoyed “Dread Nation” so much. “Dread Nation” definitely breathes new life into the zombie story, quite possibly because the zombies are not the focus, nor are they the ultimate bringer of the end of the world. Zombies pale in face of the true enemy in this book, and that enemy is racism in American society. So that means fans of “Lovecraft Country”, this might be the next  book you should add to your list.

Justina Ireland has created an alternate timeline history of America, the divergence happening during the Civil War when the Undead (or Shamblers, as they are called in this) suddenly rose from the ground. The alternate history is so rich and new, and yet so familiar, that it definitely feels like this how things would have worked out had this occurrence actually happened in American History. Jane is our protagonist, and she is a true delight as a YA historical fiction/horror/thriller heroine. She has some character similarities to other greats in the genre (Katniss Everdeen comes to mind), mainly because Jane doesn’t necessarily seek out being a leader or a rabblerouser and just wants to live life by her own rules. But unlike books like “The Hunger Games” series, which have a vague and malleable version of oppression and dystopia, the one in “Dread Nation” is right out of the history books: Jane is a black girl living in a racist society, and the injustices that she deals with are still relevant in real world American in 2018, not limited to an alternate history of this nation. Jane, like other kids of color her age, has been sent to a school to learn how to fight the zombie hordes so the white people in society don’t have to, and while she is learning to be an Attendant (a more prestigious position in some ways, as she learns not only to fight but also trains in etiquette to serve a rich white woman) it’s still a subservient place in society. Much like the modern wars of Vietnam and the Gulf Wars, it’s the minorities who are on the front lines giving up their bodies while the white elite sit by and live their lives blissfully unaffected. Jane faces systemic racism and oppression from positions of authority because of her skin, but those aren’t the only themes that still apply today. Jane’s classmate/frenemy Katherine is a white passing black girl, and while her skin means she can shield herself from racism, she doesn’t feel like she has a place in the black community or the white community. Ireland does a great job of bringing these themes (and more) to the forefront, and making them feel relevant today even though the story takes place two centuries ago.

(Note: There has been some criticism of “Dread Nation” regarding how it discusses and portrays the Native characters and themes, most prominently from Debbie Reese. While I did like the book for the most part and think that it does a good job with its portrayal of racism in America, these criticisms are important to see and think about.)

But what about the zombies, you may be asking. As a zombie aficionado (even as they start to feel a bit played out), I can say that I really liked Ireland’s take on them. The action scenes with them never failed to disappoint, and the mythology that Ireland has built around them feels fresh because this isn’t a fallen society, but a society that is trying to coexist with these things. That is a narrative that you don’t see often, and given that I’ve always wanted to see it explored more I was so happy that Ireland went in that direction with the Undead world building. I also felt like she integrated it enough into actual events in American History and changed some of the outcomes or paths in response to it that it felt believable that this is how society would have reacted. Because of this, it always does feel like Civil War Era America, even with a zombie uprising. The Undead storyline, too, finds ways to  bring forward social justice topics on race that still concern society today and back then, with science, medicine, and research being done at the expense of black lives and bodies.

“Dread Nation” was a great read that has re-energized my love for the zombie genre. Ireland has given it so much more meat, and I hope that people who read it will think about all of the things she’s trying to say, even if they just came in for the Undead.

Rating 8: A tense and unique historical fiction/horror novel, “Dread Nation” not only tinkers with the zombie story, it also uses it to examine modern issues of race and racism in America.