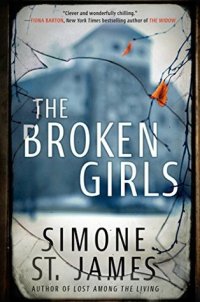 Where Did I Get This Book: I received an ARC from NetGalley

Book Description: The “clever and wonderfully chilling” (Fiona Barton) suspense novel from the award-winning author of The Haunting of Maddy Clare…

Vermont, 1950. There’s a place for the girls whom no one wants–the troublemakers, the illegitimate, the too smart for their own good. It’s called Idlewild Hall. And in the small town where it’s located, there are rumors that the boarding school is haunted. Four roommates bond over their whispered fears, their budding friendship blossoming–until one of them mysteriously disappears. . . .

Vermont, 2014. As much as she’s tried, journalist Fiona Sheridan cannot stop revisiting the events surrounding her older sister’s death. Twenty years ago, her body was found lying in the overgrown fields near the ruins of Idlewild Hall. And though her sister’s boyfriend was tried and convicted of murder, Fiona can’t shake the suspicion that something was never right about the case.

When Fiona discovers that Idlewild Hall is being restored by an anonymous benefactor, she decides to write a story about it. But a shocking discovery during the renovations will link the loss of her sister to secrets that were meant to stay hidden in the past–and a voice that won’t be silenced. . . .

Review: First I want to say a special thanks to NetGalley for providing me with an ARC of this book!

I have a deep appreciation for an unsettling Gothic horror story, and while the genre is a bit less common these days (if I’m totally wrong on this, PLEASE send me some titles! I love Gothic horror!) when I find a good one that just makes it all the more special. So when you take a historical fiction that has a boarding school setting AND throw in a restless ghost to boot, I am going to be so there and so ready. It was really just icing on the cake that “The Broken Girls” by Simone St. James not only had these plot points, but also a modern day thriller with a body found in a well and a woman who can’t let go of her sister’s murder. Fun fact: I was lucky enough to have my initial review selected as the official LibraryReads.org blurb for the book. Not to toot my own horn or anything. But the reason I was so inspired in my initial review was because this book really took me in and creeped me out for lots of reasons.

The dual narratives of 1950s and 2010s each give us pieces to a puzzle that is rooted in the mistreatment and abuses of women. Idlewood  School was an all too common place where unwanted or inconvenient girls were sent to live out their adolescence, be it because they were the children of mistresses of powerful people, mentally ill, or orphans with few other places to go. They all have the similarity in that their lives are basically valued as worthless, and few, if anyone,would miss them if they were to disappear. Which one girl does. The modern story is of Fiona, a reporter whose older sister was murdered near the property in the 1990s, and who still harbors an obsession about why this happened and it could have been prevented. And always settled above both is the ever present legend of Mary Hand, a teenage girl who died on the property shortly after giving bitrh to an illegitimate child whose body ended up in the garden. While all of the victims in this story are painted in broad brush strokes by those who live to tell the tales, be it a missing girl, a murdered girl, or a ghost girl, as the story progresses you learn so much about them, giving them more depth and showing a number of tragedies that you can’t disconnect yourself from. I was more interested in the Fiona storyline as she digs deep into the history of Idlewood and tries to find some answers to give herself peace, but I did like going back to the 1950s and seeing the group of friends of Kate, Sonia, Cece, and Roberta. The way that St.James ties it all together is worth it in the end, and I’m being deliberately vague because i think that you have to go in without any hints to really enjoy it.

I also really liked the supernatural and gothic aspects! I mean, come on! A boarding school in the middle of the Vermont Countryside? May as well be the moors! You get the sense of isolation and foreboding whenever the school and it’s grounds are described, and I could totally see why it could get lost in the wilderness even tough everyone knows that it is out there. St. James did a great job of crafting the perfect ghost story to take place there as well, harkening back to books like “The Woman in Black” and “The Haunting of Hill House” and creating a genuine tragedy that sets off a deeply creepy and fear inducing haunting. It’s also important to note that even the haunting has it’s secrets, and that while there are truths to the legend, like I would imagine most ghost stories and their origins, things aren’t always what they seem, and St. James really makes the reader feel like there is something realistic at the heart of it, a realism that keeps to the themes of gender discrimination and misogyny.

“The Broken Girls” is a dark and poignant novel that fans of Gothic horror really ought to check out. Not only does it effectively address still all too relevant themes of our culture,  I was definitely side eyeing every bump in the night right after finishing it.

Rating 8: A haunting gothic tale that brings up relevant societal issues, “The Broken Girls” is an effective and chilling mystery.

“The Broken Girls” is included on the Goodreads lists “Historical Mystery 2018”, and “Most Anticipated Mysteries 2018”.

Find “The Broken Girls” at your library using WorldCat!