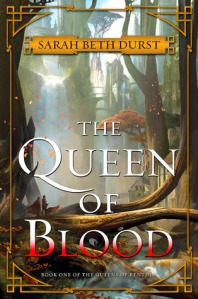 Book: “The Queen of Blood” by Sarah Beth Durst

Book Description: An idealistic young student and a banished warrior become allies in a battle to save their realm in this first book of a mesmerizing epic fantasy series, filled with political intrigue, violent magic, malevolent spirits, and thrilling adventure

Everything has a spirit: the willow tree with leaves that kiss the pond, the stream that feeds the river, the wind that exhales fresh snow . . .

But the spirits that reside within this land want to rid it of all humans. One woman stands between these malevolent spirits and the end of humankind: the queen. She alone has the magical power to prevent the spirits from destroying every man, woman, and child. But queens are still just human, and no matter how strong or good, the threat of danger always looms.

With the position so precarious, young women are chosen to train as heirs. Daleina, a seemingly quiet academy student, is under no illusions as to her claim to the throne, but simply wants to right the wrongs that have befallen the land. Ven, a disgraced champion, has spent his exile secretly fighting against the growing number of spirit attacks. Joining forces, these daring partners embark on a treacherous quest to find the source of the spirits’ restlessness—a journey that will test their courage and trust, and force them to stand against both enemies and friends to save their land . . . before it’s bathed in blood.

Review: This is another book that I snagged after getting to meet the author waaaaaay back at ALA 2017. Seriously, this is how long it takes me sometimes to get to books, even ones that I know are going to be amazing! Book scheduling, I tell you! There are trials and tribulations there. I’m sure you all know what I’m talking about! Anyways, I’ve read a few other books by Sarah Beth Durst, and while some of them have been misses, overall, I enjoy her writing style and her strong female characters. When I heard her speak about this book, I was struck by the completely original fantasy world setting and another heroine who sounded bad ass but also real and flawed.

In Daleina and Ven’s world, everything around them is made up of spirits set on destroying them. Air, water, fire, ice, tree, and earth, all wanting nothing more than to create with abandon and destroy humanity. The people’s everyday existence is one fraught with a balancing act that is delicate and completely dependent on the strength of the land’s Queen, the only person with the power to hold this malicious, wild strength in check. And when a 10-year-old Daleina’s tree-top village is destroyed, and only her small family is saved by her own  burgeoning powers, Daleina’s life changes forever. Now she must work to prove her worth and her ability to become a Queen’s heir, one of many powerful young women who must be ready at a moment’s notice to step into the role as Queen should anything ever happen to their ruler. Alongside her, Ven, a disgraced champion, will work to stave off a looming disaster that has been slowly revealing itself over the years when the Queen’s power seems to slip, as happened with the destruction of Daleina’s beloved home.

As I remembered hearing when Durst spoke at ALA, there are quite a few things that make “The Queen of Blood” standout in the vast expanse of “Queen of something” books that proliferate fantasy fiction nowadays. First off, as I stated, is the world-building. I loved the exploration of this world that we get through this story. The entire civilization seems to live in the trees, with only brief time spent on the ground (it’s more dangerous on the ground level). The Queen, and to a lesser extent, the other young women who train as heirs, all have control over the spirits and, through them, are able to manipulate the vegetation and trees to grow into elaborate structures and bridges. For long distances, a terrifying, but thrilling-sounding, wire system is set up for travelers to hook onto and speed through the trees.

The spirits themselves were equally beautiful and terrifying sounding. There were the expected descriptions of several spirits looking vaguely human-like, beautiful, and wispy. But there were others made up of animal aspects, or simply the elements themselves. There was one particular earth spirit that sounded especially terrifying, and another bird-like air spirit that sounded pretty awesome. But beautiful or otherwise, it was endlessly clear that all of them were wild, capricious, and only just contained from unleashing disaster on everything around them.

The other unique portion of the story is the way that it unfolds, both as a story and with its characters. The book begins when Daleina is only ten years old and concludes when she is near her 20s. To manage this, there are several significant time jumps ranging from only a few months to up to five years. But all of these jumps are done with care and each time, the characters and story are re-introduced with such precision and detail that it’s not jarring at all. I actually really loved this entire concept, as we got to experience Daleina and Ven’s entire existence over this fraught period of time. Particularly for Daleina and her schooling. Through these jumps in time, we get to see Daleina’s entire progress from completely untrained young girl to soon-to-be heir and grown woman. We see the steps of her process, but never linger too long on the ins and outs of her day-to-day life. It’s a difficult balance to strike: getting enough information in each glimpse to never lose sight of characterization and story, but also not getting too bogged down in any particular period of her life.

The characters, too, were both unique. Daleina, as the main character, was particularly well-rounded. She is the opposite of the “special snowflake/chosen one” and it is made clear that all of the accomplishments that she makes are through sheer determination and hard work. The hard work and training, in particular, are over and beyond what the other students must put in as Daleina doesn’t have the natural control or power over the spirits that the others do. I especially loved that the author never stepped back from this. Daleina never suddenly powers up or “discovers” some new unique thing about herself. She continues plowing forward in the face of many telling her that she can’t, and even in the face of her own understanding of her limited abilities comparative to her peers. Further, while she must work to find her own strengths, she doesn’t mope or become jealous of those around her. Instead, the story is made up of Daleina forming strong and powerful friendships with the other women around her.

Ven, our secondary lead character, was also quite a unique character to find in a book like this. For a story that seems to largely read like YA fantasy, Ven is a middle aged man who meets a young Daleina when he is already at the height of his skills. Throughout the story, and his own disgrace and redemption, Ven’s story is one of a mentor and grown man who is having to confront the realities of those he has always esteemed. Given his age and role in Daleina’s life, there is never a hint of romance (thank god), and instead a strong, steady mentorship bond is built and explored. I was there for all of this!

Throughout this all, Durst never backs down from the harsh realities and consequences of the world she’s built and the story she is telling. The action is built on true danger and violence, and no character is safe from the fallout of these fights with the spirits. The last third, in particular, took some pretty crazy and brave turns, as far as storytelling goes. I was honestly shocked by the follow-through on some decisions (in a good way!) and the ending was definitely not what I expected.

This book, and series, seems to have been skating along largely unnoticed and that’s such a shame! Durst has built an extraordinary world and peopled it with compelling and flawed characters whom you can’t help but root for. I strongly recommend it for any fans of fantasy fiction!

Rating: I loved it! The storytelling is bold and riveting, taking surprising twist and turns and committing to the tale that is unfolding.

“The Queen of Blood” can be found on these Goodreads lists: “YA Female Rulers” and “Gender Is No Object” Second-World Fantasy.”

Find “The Queen of Blood” at your library using WorldCat!

2 thoughts on “Serena’s Review: “The Queen of Blood””