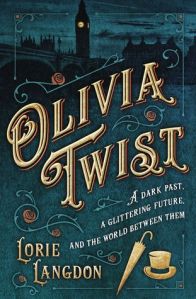 Book Description: Olivia Brownlow is no damsel in distress. Born in a workhouse and raised as a boy among thieving London street gangs, she is as tough and cunning as they come. When she is taken in by her uncle after a caper gone wrong, her life goes from fighting and stealing on the streets to lavish dinners and soirees as a debutante in high society. But she can’t seem to escape her past … or forget the teeming slums where children just like her still scrabble to survive.

Jack MacCarron rose from his place in London’s East End to become the adopted “nephew” of a society matron. Little does society know that MacCarron is a false name for a boy once known among London gangs as the Artful Dodger, and that he and his “aunt” are robbing them blind every chance they get. When Jack encounters Olivia Brownlow in places he least expects, his curiosity is piqued. Why is a society girl helping a bunch of homeless orphan thieves? Even more intriguing, why does she remind him so much of someone he once knew? Jack finds himself wondering if going legit and risking it all might be worth it for love.

Review: I’ve only read the original “Oliver Twist” once and it was quite a while ago, so I was intrigued when I ran across this gender-swapped retelling of the classic tale. However, in the end, I felt a bit misled by the book description and had a few problems with the characterization of our leading lady.

Olivia grew up on the streets and it is only through a chance of luck that she now finds herself leading the life of a society lady. But even here, amidst the gossip and sparkle, she can’t escape her past. Especially when said pasts presents itself polished up in a dashing suit and shooting her wicked grins. Jack MacCarron is more than he seems, and his history with a younger “Oliver” is only the start of what will tie these two’s future together.

What I did enjoy about this book was the writing style and historical setting. I’m particularly prone to enjoying books featuring lords and ladies circulating around ball rooms and snarking wittily at each other. The story was also quite fast paced, jumping into the action mere pages into the story. Olivia and Jack are introduced to each other very quickly, and through some well-placed flashbacks, readers are able to begin putting together their history. What also makes this fun is Olivia’s extra knowledge of their shared past, as she was only known to Jack then as a young boy named Oliver. From what I can remember from the original book, the author also does a good job at tying together the two stories in creative and sometimes unexpected ways.

However, I had a lot of trouble with a few aspects of the book. My biggest problem was not being able to suspend my disbelief about the situation that our two main lead characters find themselves in. Somehow, magically almost, both are raised on the streets but then easily slip into lives as gentry after only a few years. What’s more, they are welcomed in with very little struggle or gossip. Part of my problem with this could be the same fast-paced-ness that I praised above. In the very first chapters we’re introduced to Olivia, a lady now living the life of a society woman. But then in some quick flashbacks, we see the abject poverty and limits of the world she grew up in until she was a pre-teen. And yet, there was no evidence of this in her current manner as a lady.

I don’t want to go all “My Fair Lady” on this, but…really? Not only would I have found Olivia’s story that much more compelling had her arc included more about the ongoing struggles she had to face living this life full of politics and rules, but it was frankly unbelievable to see her navigate the ins and outs of a society that was notorious for confusing and strict rules of conduct. Many other historical fiction works set in this time narrate on and on the challenges that even women who grew up to this life encountered when living life in public society. To simply buy that Olivia, a woman who grew up without an education, without parents, and, what’s more, as a boy, would be able to simply fall into this role was just too much to swallow. The same goes for Jack, to a certain extent, but as the rules are less strict for men of the time, I was able to let this go a bit more.

My second major criticism comes with the first line of the book description and the reality we are given. Right there, in the very first sentence of the summary, we’re told that we’ll be getting a character who is not a damsel in distress. The reality is exactly the opposite. In the first few pages, we get a very unfortunate reference to the “beauty leads to rape” myth when a man instructs a midwife to raise Olivia as a boy since if she turns out to have the looks of her mother, her life will be more rough. That alone is pretty bad. But as the story goes on, Olivia repeatedly makes terrible decisions, finds herself threatened with attack and assault, only to be saved by Jack. This happened repeatedly. Not only do I never appreciate repeated threats of sexual assault as a driving force in any story, but to combine that with the first chapter’s reference to it being at all affected by a woman’s beauty and the fact that we were promised the exact opposite of a damsel in distress in the book summary, makes the whole thing very upsetting.

This all added up to a fairly disappointing read for me. The romance and chemistry between the two leads was charming, and I still enjoyed many aspects of the historical setting. But I couldn’t get past the suspension of disbelief issue or my increasing dismay with regards to the use of assault as a plot point and Olivia’s role as a repeated victim in need of rescue. I do think this book will still appeal to many other readers, perhaps those looking for a bit more of a fluffy romance read, but unfortunately it wasn’t for me.

Rating 5:  The intriguing concept and strong romantic chemistry weren’t enough to distract me from an unbelievable leading damsel who too often found herself in distress.

“Olivia Twist” is a new title and so isn’t on many relevant Goodreads lists, but it is on “2018 YA Historical Fiction.”