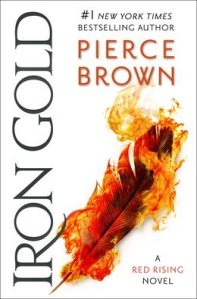 Book Description: A decade ago, Darrow was the hero of the revolution he believed would break the chains of the Society. But the Rising has shattered everything: Instead of peace and freedom, it has brought endless war. Now he must risk everything he has fought for on one last desperate mission. Darrow still believes he can save everyone, but can he save himself?

And throughout the worlds, other destinies entwine with Darrow’s to change his fate forever:

A young Red girl flees tragedy in her refugee camp and achieves for herself a new life she could never have imagined.

An ex-soldier broken by grief is forced to steal the most valuable thing in the galaxy—or pay with his life.

And Lysander au Lune, the heir in exile to the sovereign, wanders the stars with his mentor, Cassius, haunted by the loss of the world that Darrow transformed, and dreaming of what will rise from its ashes.

Review: I absolutely loved the “Red Rising trilogy. It was epic in every sense of the word: a sweeping landscape that sprawls across the entire galaxy. An intimidatingly large cast of characters whose political machinations were challenging (in a good way!) to keep track of. And a story driven by one man’s quest to begin a revolution that would shake an entire world order. But in Darrow’s success, and the trilogy’s success, where is left to go? Many, many places it turns out!

From the get go, “Iron Gold” sets out to be its own story. It’s been ten years since Darrow’s revolution, and yet he, his comrades, and his civilization are still at war, both with the remnants of the old system who seek to bring back their own ways and privileges, as well as with those in their own fledgling government who struggle to direct this new world order from within a different political and societal perspective.

The narrative is also split between four characters. Alongside Darrow, we have Lyria, a Red girl who grew up on a “freed” Mars where all is not as well as they had been promised when her family and their colony were brought up to the surface from the mines below. Back on Luna, an ex-solider-turned-thief struggles to find meaning in an existence void of his fiance who died years ago and finds himself caught up in an underbelly mafia that might be more than he can handle. And far on the out reaches of the galaxy, Lysander, the exiled heir apparent, drifts along until he unexpectedly finds himself pulled into a revolution of its own.

Both of these tactics, the expanded POV cast and the time jump, were managed extremely well. Not only was it a great choice to set the story 10 years later, but by splitting the narrative, “Iron Gold” was freed up from some of the constraints that were beginning to niggle at me back in “Morning Star” when Darrow’s hero complex and habit of speechifying was just beginning to annoy me.

Here, not only do we have the three other characters, but Darrow is very much a changed man from the hopeful, conquering hero that we saw at the close of “Morning Star.” Through him, Brown tackles complicated issues surrounding ongoing warfare, the effects to the psyche on career soldiers, and the simple truth that winning a revolution doesn’t magically deliver up a new world freed of the systemic social classism that was at the heart of the old one. Darrow doesn’t know how to come home, and his discomfort while there, surrounded by friends, his wife, and his son, is palpable. Further, Brown gives us a more complicated Darrow. No longer is the reader assured that however morally grey Darrow’s decisions may be, that of course he is on the right side of this issue, he’s going to save the day! This Darrow is operating in a world where the black and white issue, upending the Gold class system, has already happened. But Darrow’s own legend has become  a burden and throughout this story I often found myself questioning not only his actions but his justifications. Darrow almost becomes an unreliable narrator, and I loved it all.

This discomfort and moral greyness carried over throughout much of the series. While the first trilogy was in many ways a simple mission with the good guys saving the world, this book challenges much of what we took for granted before. Through Lysander, we see a young man who was torn from the only life he had been trained to and cast out into the wilderness. Alongside him, we see the fallout of decisions that were made years ago to support Darrow’s revolution, but had their own catastrophic consequences on other parts of the galaxy and felt by other people. I enjoyed Lysander for the most part, but I also struggled with his decisions towards the end. While I understood them and why he, specifically, would choose as he does, this discomfort of both rooting for AND against a character at the same time was challenging.

Lyria, growing up in the slums on Mars, highlights the fact that winning a war isn’t all that is needed to save a downtrodden people. She and her family are essentially refugees on their own planet, forgotten by the very people who set out to save them who are now caught up in the “bigger picture.” Yes, that big picture is important, but through Lyria, we see the very real image of a revolution that is still actively failing the vulnerable. Lyria was the one character who was entirely sympathetic, and I loved all of her chapters.

Ephraim, the Grey solider-turned-thief, was almost the most “Darrow-esque” character of the whole lot, at least as far as you can judge from the original trilogy. Which is funny, since of the four, he’s also the one most in the wrong throughout the book. But through him we had much of the action and adventure we had in the first series. More jokes, less brooding.

There was also, of course, the return of many characters from the first book. Most notably, Sevro is right along Darrow for much of this ride. I loved that for all of his craziness, of the two, Sevro was by far the more balanced individual, able to carry the trials of war more lightly, and, most importantly, still able to retain a healthy, loving relationship with his wife and children. His wife, Victra, was probably my favorite character in the book for the simple fact that she had a battle suit fitted for her 8 month pregnant body and didn’t let it slow her down one bit.

The biggest disappointment, however, was Mustang. Not in anything she does, but by the simple fact that she has very little page time in this book. It’s not unexpected, considering her role as Sovereign, but I still wish we had more from her. I did enjoy the conflict that arose between her and Darrow. They are on the same side, obviously, but Brown masterfully illustrated the fact that a ruling Sovereign and a general on the front lines might still find themselves in very different places and making very different decisions, even when reaching for the same goal.

This is clearly the first book in a trilogy (?), and while many of the storylines are wrapped up well enough for the book itself, there are just as many ongoing challenges that are only made worse in this first book. Things go pretty badly for almost everyone involved and it definitely seems to be heading towards a “darkest before the dawn” type place. Further, given this book’s willingness to confront the moral quandaries and grey zones of warfare, it feels like less of a given that all will end well for our heroes. As we’ve seen here, winning the battle doesn’t get you very far if you don’t know how to live without fighting. And what’s more, what is the line in a war to save a galaxy? And are you even saving it to begin with? This book challenges its readers in ways that the original trilogy did not, and that is one of the highest marks in its favor. If you’re a fan of the first series, definitely get your hands on this one soon! But make sure to browse through those first few books again first, cuz, man, there are A LOT of characters and connections that I had to try and remember as I went along!

Rating 9: Darker and more complicated than the first, but just as excellent, especially with its expanded POV character cast.

“Iron Gold” is a new book and isn’t on any relevant Goodreads lists, but it should be on “Sword and Laser Sci-Fi.”.