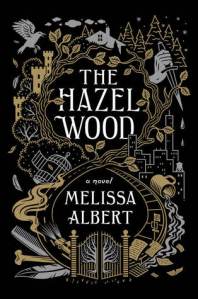 Book Description: Seventeen-year-old Alice and her mother have spent most of Alice’s life on the road, always a step ahead of the uncanny bad luck biting at their heels. But when Alice’s grandmother, the reclusive author of a cult-classic book of pitch-dark fairy tales, dies alone on her estate, the Hazel Wood, Alice learns how bad her luck can really get: Her mother is stolen away―by a figure who claims to come from the Hinterland, the cruel supernatural world where her grandmother’s stories are set. Alice’s only lead is the message her mother left behind: “Stay away from the Hazel Wood.”

Alice has long steered clear of her grandmother’s cultish fans. But now she has no choice but to ally with classmate Ellery Finch, a Hinterland superfan who may have his own reasons for wanting to help her. To retrieve her mother, Alice must venture first to the Hazel Wood, then into the world where her grandmother’s tales began―and where she might find out how her own story went so wrong.

Review: I judged the book by its cover. And the cover is beautiful, so I picked it up. Also, dark fairytales, a mysterious family history, travel between worlds, and this book sounded right up my alley. And while pieces taken outside of the whole were enjoyable, I found myself not as enamored by this one as I had hoped.

Alice and her mother have been running their entire lives, pursed by nameless, faceless, bad luck. That, and from the mystery and cultish fervor that swirls around Alice’s grandmother who is best known for writing an obscure book of fairytales. Other than flee when bad luck arrives on your door, Alice knows there is one rule: don’t interact with fans of her gradnmother’s book. But when her mother disappears, Alice has no choice but to turn to a fan and fellow classmate, the only one who will believe the strangeness involved. And neither are fully prepared for what they get: perhaps those fairytales weren’t fiction after all.

Part of my struggle with this book was due to the fact that it was simply incredibly slow for the first half of the book. It’s not a monstrously long title by any means, but half of a book is still too long to take to get to the meat of the story. There’s quite a lot of build up to Alice’s mom’s disappearance, and then, afterwards, it takes even longer somehow for Alice and Finch to get into the actual magical aspects of the story. This was even more frustrating because it didn’t seem that this extra time was spent building anything. Alice and Finch, early in the story, have already bought into the concept that there are magical elements at play, so it’s not character development that necessitates the slow movement. Further, there are about three or four mini adventures that they go through before even getting out of the city which felt like three or four more than were needed.

This slow beginning also had the unfortunate effect of making me begin to dislike Alice herself. Since the story goes some interesting places with her character in the second half of the book, the fact that the slowness of the first half had already damaged my enjoyment of her was pretty unfortunate. Yes, Alice had a non-traditional childhood and one that was made up largely of isolation and instability. And the author lays the groundwork for her anger early in the story. But all of that given, she’s just kind of a mean person a lot of the time which made it hard for me to become invested in her emotional arc. Like I said, there’s a payoff for some of this in the end. But I do think the slowness of the first half is directly responsible for the fact that damage control had to be done at all. Had we more quickly gotten into the actual story itself, there might have been less time for me to wallow around thinking that Alice was just kind of being a bitch to a bunch of people most of the time.

In the second half, things do pick up, and it was here that I found much of my enjoyment of the story. I loved the fact that the author fully embraced the darker side of fairytales. Throughout the story,  we get to hear some of the stories that were in Alice’s grandmother’s collection, and they are perfectly pitched as darkly creepy and strange, without any clear moral or predictable pattern. This just makes it all the more shivery when the characters and worlds themselves begin to come to life.

Readers’ mileage for this part of the story could also vary. There’s a lot of mystery and obfuscation. Characters withhold information simply because they can. There are definite elements of “Alice in Wonderland” with the strangeness, nonsense, and bizarre mini scenes that Alice travels through. I enjoy nonsense fairytales, and I especially liked the darker aspects of this one. However, I can see how it could read as disjointed and, again, hard to connect to for some readers. Even I struggled a few times with the strange juxtaposition of classical dark magical elements with other very modern references. It was definitely jarring at times, but by this point I was so relieved to have the story picking up that I didn’t mind.

This book was very hit and miss for me. There were parts of it that I absolutely loved (the fairytales themselves, most of the action in the second half, and the nice twist at the end), but I also very much struggled to get into the story. It starts slow and there were certain writing choices, just the way certain sentences were strung together, that were confusing and required me to read through twice, something I never love doing. I also wasn’t sold on Alice as a character, though I did enjoy the later reveals with her. If you like dark fantasy stories and can handle a slow start and a healthy dose of the strange, I’d recommend giving “The Hazel Wood” a go!

Rating 6:  A dark “Alice in Wonderland” where Alice is kind of a brat. But the fairytales themselves were on point!

“The Hazel Wood” is a newer book and so not on many Goodreads lists. I’m not sure whether I agree with this classification or not, but it is included on “2018 YA Horror.”

Find “The Hazel Wood” at your library using WorldCat!