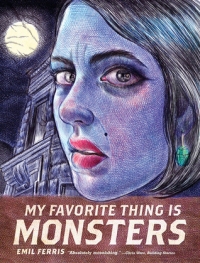 Book: “My Favorite Thing Is Monsters (Vol.1)” by Emil Ferris

Book Description: Set against the tumultuous political backdrop of late ’60s Chicago, My Favorite Thing Is Monsters is the fictional graphic diary of 10-year-old Karen Reyes, filled with B-movie horror and pulp monster magazines iconography. Karen Reyes tries to solve the murder of her enigmatic upstairs neighbor, Anka Silverberg, a holocaust survivor, while the interconnected stories of those around her unfold. When Karen’s investigation takes us back to Anka’s life in Nazi Germany, the reader discovers how the personal, the political, the past, and the present converge. Full-color illustrations throughout.

Review: I remember the moment that I first laid eyes on the book “My Favorite Thing is Monsters (Vol.1)”. I was unloading boxes of new books at work, and I literally gasped when I saw it. I mean, my GOD. Just look at this cover. THAT IS ALL BALLPOINT PEN, GUYS. And plus, it has ‘monsters’ in the title. My boss said she was surprised that the request wasn’t for me, and I admitted that I hadn’t even heard of it. So I said that I was going to request it…. And then I didn’t. It entered in and out of my mind for the next few months, until I was at a staff training and it was on the shelf. So… I grabbed it. I wish that I had grabbed it sooner. Because “My Favorite Thing Is Monsters” was just amazing.

I mean, I just need to talk about the art. Like I said, this is all done in pen, and it just pops off the page. It’s seriously astounding. The detail and the coloring, as I kept turning page after page in this book I just kept saying ‘wow’ as I would see a new image that took my breath away. Ferris really dives into her artwork, and the painstaking detail is so evident up close, while seeming to be a la Robert Crumb from a further distance. It’s a style that I really enjoy, and while it seems to be a little surrealistic in some ways, in other ways it was so human and so real. There are images of people, images of monsters, and images of urban landscapes that all take their own lives through her style. She also draws classic artwork through this lens, when Karen and her brother Deeze go to the art museum in Chicago, and seeing these works recreated in this style was also incredible. I loved the use of colors as well, as sometimes she would draw characters certain shades to describe different feelings. The premise is that these are the drawings of our ten year old narrator within her lined journal, and even that is consistent and well laid out.

The story itself if both a charming and bittersweet coming of age story, and a gut punch and tense mystery. Karen, or narrator, is a ten year old girl who is quite precocious in a lot of ways, and fancies herself as a Wolfman-esque monster who takes on the role of detective. I gotta say, the images of this little Wolf-creature in a trench coat is precious and funny, Seeing her try to piece together the possible murder of her upstairs neighbor, Anka, is classic bildungsroman in it’s premise, but in it’s execution it feels fresh. Karen is delightful, as her imagination sparks on the pages and her personality shines as she starts to learn more about those around her and learn more about herself. You also get to see late 1960s Chicago and all of it’s political turmoil through her eyes, which gives it a unique, and even more heart wrenching, perspective (I’m thinking of one specific scene where she is very nearly sexually assaulted by some bullies in her neighborhood, and she just writes about it matter of factly and as if it’s just something that could happen, but didn’t, so life goes on. It’s rough.). Karen loves monsters, and is starting to learn that monsters are very real, but not in the way that she would like them to be. We hear of an see violence and racism around her, and we see her reaction (and the reaction of her friend Franklin, an African American boy) to the murder of Martin Luther King Jr. Her family life isn’t easy by any means, as Dad is out of the picture, her older brother Deeze is loving but reckless, and their mother is kind and gentle but has some problems Karen isn’t quite privy to, though the reader is. We also see the struggles of being a lower class family of multiracial descent, as the fact that Karen and her brother Deeze are part Latino and part Native is thrown at them by the white people around them from time to time. Struggles and all, I loved this family, and it’s tenuousness made me love them even more, and ache for them as well.

The mystery of Anka’s death is one of the main themes of this book, and we see some of her own childhood mirrored in Karen’s through diary entries. Anka came of age in Weimar Germany, and as a young woman was taken to a concentration camp because she was Jewish. This story is another example of monsters in this world, and the rumors of a potential Nazi in town is one of the threads in the mystery that Karen is hoping to solve. But to tell you the truth, even though this mystery is ongoing (as there is another volume of this coming out next summer!), I’m more interested in the journey getting there and Karen learning things about Anka and the world around her then actually finding out who killed her.

There is one storyline that I’m not quite feeling as of right now, and that involves Karen and her friend Sandy, a malnourished little girl who may actually be a ghost. But hey, I suppose in a book about monsters it doesn’t hurt to have something of the supernatural there to shake things up.

Rating 9: A sumptuous and beautiful book with a gripping mystery, “My Favorite Thing Is Monsters (Vol.1)” is a great book and a huge achievement. The art is gorgeous, the story is bittersweet and haunting, and I can’t wait for the next book to come out.

“My Favorite Thing Is Monsters (Vol.1)” is included on the Goodreads lists “Best Comic Books and Graphic Novels of 2017”, and “NPR’s 100 Favorite Graphic Novels and Comics”.

Find “My Favorite Thing Is Monsters (Vol.1)” at your library using WorldCat!

2 thoughts on “Kate’s Review: “My Favorite Thing Is Monsters (Vol.1)””