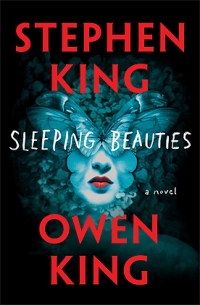 Book Description: In this spectacular father-son collaboration, Stephen King and Owen King tell the highest of high-stakes stories: what might happen if women disappeared from the world of men?

In a future so real and near it might be now, something happens when women go to sleep; they become shrouded in a cocoon-like gauze. If they are awakened, if the gauze wrapping their bodies is disturbed or violated, the women become feral and spectacularly violent; and while they sleep they go to another place. The men of our world are abandoned, left to their increasingly primal devices. One woman, however, the mysterious Evie, is immune to the blessing or curse of the sleeping disease. Is Evie a medical anomaly to be studied, or is she a demon who must be slain? Set in a small Appalachian town whose primary employer is a women’s prison, Sleeping Beauties is wildly provocative and gloriously absorbing.

Review: Happy Halloween, friends!!!! I hope that you are all doing (or have been doing some great things to celebrate the holiday!! I’m unfortunately working today, but then tonight I’m going to watch some gory horror movies and hand out candy to the neighborhood children. I have been saving an epic book for my Halloween review, and what better book than the newest one by Stephen King and his son Owen, “Sleeping Beauties”. Clocking in at about seven hundred pages, this book is a bit of a behemoth, but the timing was such that it ended up being the book with which I close out my HorrorPalooza reviews (though fear not, lots more horror reviews to come in the near future).

Stephen King has always known how to write a tense and dark disaster tale, be it “Under the Dome”, or my personal favorite “The Stand”, and when he teams up with Owen King they bring us a dark and dreamy tale of a world without women. Well, mostly. The human women of the world have started to fall asleep, and a gauzy film grows over their faces as they refuse to awaken. If you try to remove the film, the woman will violently and graphically attack you before going back to her slumber. This is definitely the stuff of nightmares, but in this book it never really treads fully into pure horror territory. Tense, yes. But there is also a dreaminess about it that makes you feel more like you’re living within, well, a dream. The cast of characters is huge, and we see perspectives of many different people. At times it was hard to keep up with them all, but they all mostly had connections to each other within the small town of Dooling and the Women’s Prison that is nearby. The characters come from a number of different backgrounds, be it Clint Norcross, the Prison psychologist, or Lila, the Sheriff of the town and Clint’s wife, or Jeanette, a prisoner who is trying to do good so she can do right by her son, or many many others. I liked seeing how all of them responded to the sudden crisis, and the places that the Kings took the reactions, from the sad, to the disturbing. My favorite character by far, though, was Evie, the mysterious woman who shows up in town just as the ladies start falling under the mysterious spell. She is both menacing and whimsical, frightening and utterly charming, and I loved that we got to know her, without getting to know much at all.

I also liked the setting of this book. Stephen King has always done a very good job of creating a small town and exposing it’s underbelly, but along with Dooling we get to see where these women ‘go’, when they are ‘asleep’ (though not all of the women characters fall asleep; some stay awake through either drug induced interventions). A sort of post-apocalyptic world comprised entirely of women is a fascinating concept, and where they are is a little “Y, The Last Man” and a little “The Stand”, but without the carnage and tragedy and violence. Sure, it kind of raises some hamfisted musings about how if women ran society it would be a peaceful place because they are just so so good, but I liked seeing a new society built up without the usual bickering and power plays that come with a story like this when dudes are in charge. Especially given some of the stuff coming out about violence and sexual mistreatment of women across our present society. Did I think it was a bit cloying and kind of ‘madonna’-esque? Sure. But man, it did kind of sound nice, if only for a short while.

I do think that this book was kind of long and filled with so many characters it was hard to keep up. The Kings provide a handy dandy chart at the beginning of the book giving us all the characters and their roles in town. This was a nice resource to have, but damn, if you need that resource maybe there are just too many characters you’re trying to juggle. I think that some of the subplots were kind of unnecessary, and it could have probably been trimmed down by a hundred pages or so. But I also understand that when you have two writers, both of them from the King family, there might be lots of ideas that are ultimately going to want to make the final cut. And when you’re part of the King family, who is to say no to that? I just found myself having to go back and remind myself of various things because there was so much to keep straight, and that’s not always a good thing when you’re trying to be absorbed in an otherwise well thought out story.

Overall, I thought that “Sleeping Beauties” was a well done collaboration between father and son. They blended their voices together well enough that it did feel like one voice and contributor, and that can be hard. This may not be the usual fare that one may expect from Stephen King, but hey, the guy is expanding his horizons, and it’s nice to tag along. It also makes me interested in picking up more of Owen’s work, to see if I can pinpoint his influence.

Rating 7: An epic and dark fantasy that explores gender, human nature, and societal roles between the sexes. It was a little convoluted, a little hamfisted at times, and a little long, but Stephen and Owen King mostly achieve a book that raises some legitimate questions and examines the human condition.

“Sleeping Beauties” is included on the Goodreads lists “ZZZZZzzzzzzzz”, and “Stephen King Books” (in case you didn’t already know).