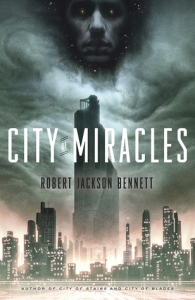 Where Did I Get this Book: Blogging for Books

So when he learns that his oldest friend and ally, former Prime Minister Shara Komayd, has been assassinated, he knows exactly what to do — and that no mortal force can stop him from meting out the suffering Shara’s killers deserve.

Yet as Sigrud pursues his quarry with his customary terrifying efficiency, he begins to fear that this battle is an unwinnable one. Because discovering the truth behind Shara’s death will require him to take up arms in a secret, decades-long war, face down an angry young god, and unravel the last mysteries of Bulikov, the city of miracles itself. And — perhaps most daunting of all — finally face the truth about his own cursed existence.

Previously Reviewed: “City of Stairs” and “City of Blades”

Review: It’s no secret that I absolutely adored “City of Stairs” and “City of Blades.” In both books, Bennett established a seemingly endless world full of wonder and madness. He also accomplished the rare feat of producing a second book that I believe was even better than the first! It seems that resting on his laurels is simply something Bennett is incapable of doing, as “City of Miracles” is a perfect closely act for this trilogy.

It’s been 13 years since the events of “City of Blades,” and Sigrud lives a lonely, tired existence on the edge of society, waiting and waiting for a call from his former partner and friend Shara to call him back to the fight. To the world. To anything. The call finally comes, but not in a way he could ever have wished for: Shara has been assassinated. With this news, and the consuming grief and rage that has driven him throughout his life, Sigrud comes to live once again, blazing his way through the world hoping to servce justice for his friend’s senseless murder. Along the way, he finds new purpose in protecting Tatiana, Shara’s adopted daughter, and a girl who is tangled up in much more than Sigrud can imagine. Once again, the Divine is at work in the world. And once again, Sigrud will rampage through anything and everything in his way to protect and avenge those he loves.

What made “City of Blades” stand out from the first book in the series, was the added gravitas of subject matter that was layered upon an already fantastical story and world. The fantasy elements, the miraculous, even the Divine, served only as platforms upon which Bennett explored the deeply complicated history, purpose, and definition of warfare and what makes up the mind of a solder.

“City of Miracles” is excellent for following in this pattern. We have all the boundless creativity that can now be expected of this author and this world: Divinities of Night itself, steampunk-ish tramcars that trek across arctic mountainscapes, magical clothes and wondrously impossible buildings. But through these flashes of fantasy action and detailed world-building, Bennett is telling a much more grounded story.

Sigrud’s life is one of tragedy. The villain’s life is one of tragedy. The villain’s parent’s life is one of tragedy. It is all circular, and death follows death, vengeance and justice doling out the same misery and atrocity they work to revenge. Through Sigrud’s own life, and those he works to aid in this book, we see this pattern replay itself endless. Where is the live between justice and simply committing more crimes? At what point does the power gained through grief justify more grief itself to perpetuate its own existence? The the book before it, this story challenges its readers to think beyond common storytelling tropes. We’ve re-defined the soldier through a woman whose seen the damage and power that warfare brings. And here we’re redefining the avenging hero as more than the white knight we’re always given.

I was also pleasantly surprised by the inclusion of characters from previous books and the ways their stories were tied into the narrative of this book. Further, the new characters who are introduced were intriguing, particularly Ivanya, a character we met oh, so briefly back in book one but who plays a critical role in this story.

The author also cuts out quite a lot of work for himself with this story. It’s the final book in a trilogy, so our main characters’ story lines must all be tied off and resolved, any lingering questions about their pasts drawn to a close. But he also takes it upon himself to provide much needed information on the years that came before the first book itself. The ending is bittersweet and perfect. It closes in small moments and fantastic explosions (both literally and figuratively). These characters’ stories may be ending, but we’re left with a wide open world of possibility stretching out ahead.

I’m not sure if the author has any plans of revisiting this world, but if he is, the groundwork has been lain for a continuation, and I would be the first one in line at the bookstore. I can’t recommend this book, and this series, enough! If you enjoy fantasy with complicated heroes and challenging ideas, definitely check these out!

Rating 9: An excellent conclusion to an excellent trilogy. Fun, fast-paced, and challenging its readers at every turn!

“City of Miracles” is included on these Goodreads lists: “Best Science Fiction & Fantasy Books” and “Best Fantasy Books of the 21st Century.”

Find “City of Miracles” at your library using Worldcat!