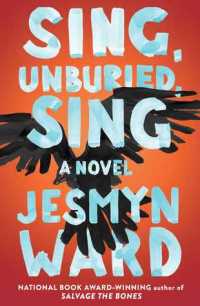 In Jesmyn Ward’s first novel since her National Book Award winning Salvage the Bones, this singular American writer brings the archetypal road novel into rural twenty-first-century America. Drawing on Morrison and Faulkner, The Odyssey and the Old Testament, Ward gives us an epochal story, a journey through Mississippi’s past and present that is both an intimate portrait of a family and an epic tale of hope and struggle. Ward is a major American writer, multiply awarded and universally lauded, and in Sing, Unburied, Sing she is at the height of her powers.

Jojo and his toddler sister, Kayla, live with their grandparents, Mam and Pop, and the occasional presence of their drug-addicted mother, Leonie, on a farm on the Gulf Coast of Mississippi. Leonie is simultaneously tormented and comforted by visions of her dead brother, which only come to her when she’s high; Mam is dying of cancer; and quiet, steady Pop tries to run the household and teach Jojo how to be a man. When the white father of Leonie’s children is released from prison, she packs her kids and a friend into her car and sets out across the state for Parchman farm, the Mississippi State Penitentiary, on a journey rife with danger and promise.

Sing, Unburied, Sing grapples with the ugly truths at the heart of the American story and the power, and limitations, of the bonds of family. Rich with Ward’s distinctive, musical language, Sing, Unburied, Sing is a majestic new work and an essential contribution to American literature.

Review: Every once in awhile, a book comes along that just blows me the hell away. One that feels like an elevated experience just reading it, pouring over it, immersing oneself in it. “Sing, Unburied, Sing” by Jesmyn Ward did that for me, and I am still staggered by how fantastic it was. I’ve come to expect nothing less from Jesmyn Ward, one of the best writers out there today, bar none. I’ve read two of her other books, both of which are transcendent and incredibly emotional. The first is the novel “Salvage the Bones”, a story about a rural and poor African American family living in Mississippi as Hurricane Katrina lurches and looms towards them. The other is “Men We Reaped”, a memoir about the numerous black men in Ward’s life who all died far too young, brutal casualties of overt and systemic racism that is all too present in the U.S. When I heard she had a new book coming out, I requested it, and then steeled myself for it as I picked it up.

The first thing that I must mention is the characters and characterization in this novel. We follow a couple main perspectives. The first is Jojo, a thirteen year old boy who has been raised mostly by his grandparents (Mam and Pop), as his mother is addicted to drugs and his father is in prison. He has also taken on the caregiver role to his little sister Kayla, wanting to keep her safe from the ills of the world. Mam is very ill with cancer, and Pop tells Jojo stories from the past in hopes that Jojo can learn from them. The second is Leonie, Jojo and Kayla’s mother. Her boyfriend Michael is getting out of prison soon, and her all encompassing love for him blinds her to most other things. Her drug addiction is fueled in part by the fact that she sees visions of her dead brother Given while she’s high. The final perspective is from Richie, the ghost of a thirteen year old boy who died at Parchman, the prison Michael is at. Richie knew Pop when he was alive, and he has unfinished business with him. Jojo starts seeing Richie on their travels, as Richie knows that there’s a connection there. All of these characters are well rounded and explored, and I got a feel for every one of them (as well as a number of the other characters like Mam and Pop). I understood the motivations of each of them. I was especially moved by Leonie, as while she makes terrible and selfish decisions when it comes to her children, I completely understood why she made those choices, and how factors both within her control and outside of it have made her into the person that she is.

The themes of this book also blew me away. For one, I’m a huge sucker for a ghost story, and this one has the feel of a Southern Gothic novel with the isolation and wide open spaces that still feel claustrophobic. But Ward brings in other ghosts that haunt this country and our culture, as the setting and characters are still plagued by the racism that has so infected this country. From the remnants of Jim Crow laws to the consequences of the War on Drugs to police brutality and violence, the journey that this family takes, physical and emotional, always has the specter of racism hanging over it. Ward doesn’t offer any solutions or answers or happy endings of conclusions to this, and all you can hope for is that this family will continue to survive in face of explicit (Michael’s family) and implicit racism that surrounds them. It’s really the perfect use of a ghost story, as the all too true horrors of our racist culture and society still haunt us, as much as we may hate to acknowledge it.

And the writing is just beautiful. Ward has a serious talent for creating a story and an imagery that leaps and flows in the pages of this book. I felt like I could see everything that was happening in my mind’s eye, and I was so engrossed I devoured this book in a day’s time. Ward is an author who is being called a ‘modern Faulkner’ by a number of people, and while I understand the sentiment (examinations of the American South are a commonality between the two), I think that she easily stands in a league of her own. This book is exactly why, and I urge everyone to give it a try and see why, because nothing I write here will be able to do it justice.

“Sing, Unburied, Sing” is one of the best books I’ve read this year, no question. Please please please go read it and see for yourselves.

Rating 10: I cannot tell you how much I loved this book. A heart rendering story about literal and metaphorical ghosts, family, the South, and Americana.

“Sing, Unburied, Sing” is included on the Goodreads lists “Anticipated Literary Reads for Readers of Color 2017”, and “Anticipated/Best 2017 Literary Fiction”.