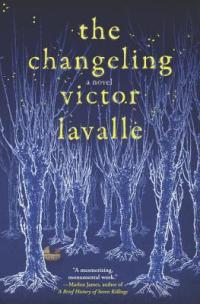 Book: “The Changeling” by Victor LaValle

Book Description: One man’s thrilling journey through an enchanted world to find his wife, who has disappeared after seemingly committing an unforgiveable act of violence, from the award-winning author of the The Devil in Silver and Big Machine. Apollo Kagwa has had strange dreams that have haunted him since childhood. An antiquarian book dealer with a business called Improbabilia, he is just beginning to settle into his new life as a committed and involved father, unlike his own father who abandoned him, when his wife Emma begins acting strange. Disconnected and uninterested in their new baby boy, Emma at first seems to be exhibiting all the signs of post-partum depression, but it quickly becomes clear that her troubles go far beyond that. Before Apollo can do anything to help, Emma commits a horrific act—beyond any parent’s comprehension—and vanishes, seemingly into thin air.

Thus begins Apollo’s odyssey through a world he only thought he understood to find a wife and child who are nothing like he’d imagined. His quest begins when he meets a mysterious stranger who claims to have information about Emma’s whereabouts. Apollo then begins a journey that takes him to a forgotten island in the East River of New York City, a graveyard full of secrets, a forest in Queens where immigrant legends still live, and finally back to a place he thought he had lost forever. This dizzying tale is ultimately a story about family and the unfathomable secrets of the people we love.

Review: Victor LaValle is one of our most under-appreciated dark fantasy/horror writers today, and I say this with conviction. Everything I have read by him I have really enjoyed. I was sufficiently creeped out by “The Devil in Silver” and deeply fascinated by his Lovecraft deconstruction “The Ballad of Black Tom”. And now I come to his newest book, “The Changeling”. Changelings, as I’m sure you may know, were a superstition that people back in the day had, in which a fairy or other kind of creature would kidnap a child and leave an imposter, or ‘changeling’, in it’s place. This concept no doubt led to a lot of abuse, cruelty, and murder towards children over the years, specifically those with developmental disabilities. Nowadays we just think of them as folklore, seen in books like “Outside Over There”, or as metaphors like in the movie “The Changeling” with Angelina Jolie. But LaValle has taken the changeling myth and given it a new, dark story that I deeply enjoyed.

One of the many things I liked about “The Changeling” is that it really kept me guessing as I read it. While it’s true that at the end of the day I knew that yes, this HAD to have supernatural elements to it, it also made me think about the very real issue of post-partum depression and the pressure on new parents, mothers in particular, to be great at it right from the start. If this book had been about an untreated mental illness and the tragedies that can happen because of it, LaValle would have told a sensitive and thoughtful story about tragedies that we just don’t like to talk about or acknowledge. Even though it was fantasy, so many elements of it felt incredibly real and plausible, from the horrors of modern technology making us less safe than we can imagine, to the struggles new parents face from family, society, and themselves. He also does a great job incorporating themes of race and gender into this story, with racism and misogyny being underlying and indirect villains towards Apollo and Emma alike. So many real world horrors come into this book and yet all have a dreamy sort of air about them, and it left me feeling under a spell as well as on edge.

There is also a lovely theme in this book that has to do with books and storytelling. Apollo is not only a book dealer, he is greatly attached to a copy of the book “Outside Over There”, one of the few things that his father left for him before he up and vanished. Apollo’s love for this book about a girl who needs to save her baby sister from those that stole her away may seem a bit on the nose for the story, but the other themes of paternal abandonment and parental failure and anxiety are also present. Apollo’s father wasn’t there for him, much like Ida’s father is away. Apollo’s love for his child blinds him when things may not be what they seem, just as Ida’s love for her sister blinded her. Parental failings and anxieties both in “Outside Over There” and “The Changeling” dance between the pages, as Ida has to grow up fast when her mother isn’t there for her emotionally and Apollo has to grow up fast when his mother can’t be there for him physically. Even New York becomes a dreamy fairy world you can’t quite trust, just like the world of Outside Over there, which Ida falls into when she starts her journey going out the window the wrong way. And there are fair reminders in this book that trolls are no longer just mystical creatures that want to eat up children, but are very real dangers in a world where your life is online for the entire world to see. That kind of felt heavy-handed at times, but overall it was just another clever way to update our fairy tale for an NYC setting.

I think that if I had a quibble with it, it would be that it was mostly from a male point of view. I would have liked to have seen some of Emma’s journey as well. I understand that revealing her secrets was another subversion of fairy tales and the roles that women are held to (damsels or witches), but I think that her own path would have been highly enjoyable to read.

A haunting and breathtaking story, “The Changeling” is dark and sad, but also hopeful and vibrant. If you want a modern and dark fairy tale, this book should be one that you put on your ‘to read’ list.

Rating 8: A complex and dark fairy tale, “The Changeling” is a beautiful and striking work of dark fantasy/horror with a modern twist and a relevant commentary.

“The Changeling” is included on the Gooreads lists “Beautifully Disturbing”, and “2017 SFF by Authors of Color”.

Find “The Changeling” at your library using WorldCat!

3 thoughts on “Kate’s Review: “The Changeling””