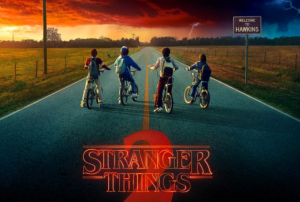 I get chills just watching this! I absolutely loved the first season (so much so that I re-watched it on a binge with my husband in a hotel during our honeymoon. We needed a break from the site seeing! And it was really good! I will defend this choice forever). This trailer is the perfect balance of giving viewers everything they could want. Familiar characters, but with new challenges. Stakes (and monsters) that are bigger than ever. The music is on point, the visuals are stunning, and it doesn’t seem to have lost anything from one season to this (the biggest worry always with second seasons). I love that it looks like we will get so much more from Will, who was largely just missing the entire first season.

I’m not hugely into Westerns. I think I read one Louis L’Amour years ago and was pretty “meh” about the whole experience. However, I discovered “Justified” earlier this spring and have been steadily consuming it almost nightly ever since. Two things make this series stand out in my mind: 1.) The casting. Timothy Olyphant is pitch perfect as Raylan Givens, a jaded, trigger happy, Kentucky marshal. And Walton Goggins makes you root for the “villain” of the story almost just as strongly as you do for Raylan. 2.) The writing. The dialogue in this series is smart, quick, and leaves you wishing you had thought of that line. Goggins, in particular, has a way of stringing words together that makes them come out sounding almost like poetry.

It’s been a busy, busy summer. Between traveling and finishing our basement, I’ve been in desperate need of some forced relaxation. Enter: Joanna Basford and her gorgeous artwork in her adult coloring book series. I loved coloring as a kid, and I’m not quite sure why I thought that I had to stop as an adult. But this last year when I realized that there is a thriving market for adult coloring books, I was beyond ecstatic. It took me hardly any time to realize that Joanna Basford is pretty much the reigning queen in this arena. And for good reason! Her images are beautiful, creative, and intricate enough that it can take days to finish coloring one page. One of my favorite things to do recently has been to color a page from “The Enchanted Forest” book I own while listening to my audiobook. Have to get that reading in, too, you know!

Web Series: “The Most Popular Girls in School”

I’m late to the train on this one, but “The Most Popular Girls in School” is a hilarious and vulgar web series about cheerleaders and popular girls being snide to each other. And on top of that, it’s all stop motion with Barbies. Yep, you read that right. Awful nasty popular girls as played by stop motion Barbies. From the rage filled cheerleader Brittnay Matthews, to the aloof and unbothered new girl Deandra, to the bubble headed Parisian (but possibly Québécois) Saison Margueritte, the characters are outrageous and hilarious. It’s very much a hybrid of “Mean Girls” and “South Park”, and I can’t get enough of it.

“Wet Hot American Summer” is my favorite movie of all time. I had promised some of my girlfriends that I would hold off on watching its newest miniseries, “Ten Years Later,” until I could watch it with them. So the night that that one dropped, I instead re-watched the first sequel series, “First Day of Camp.” And gosh, it’s still filled with joy, absurdity, and a great cast with great comedy to boot. Most of the (HUGE) original cast came back, including Paul Rudd, Amy Poehler, and Bradley Cooper (whose romance with Michael Ian Black in the movie is given an origin story here, and yes, it’s just as sweet as you’d think), and on top of that there are many, many cameos from other comedic players. It perfectly captures the joy of the movie, more so than “Ten Years Later” (yes I did end up watching it). Watching “First Day of Camp” and then “Wet Hot American Summer” is the perfect way to close out your own summer.

My love of true crime has really been given a LOT to work with lately. Between the “My Favorite Murder” Podcast and a number of pretty neat true crime books coming out, my guilty pleasure has been well sated. And now Netflix is coming out with “Mindhuter”, a series about two FBI Agents (one played by Jonathan Groff) who try to study and profile serial killers. On top of that, it’s based on a book written by John Douglas! This trailer is creepy and unsettling, but it also has some familiar faces in it for me, in terms of the killers they are going to be tackling (hey hey, Edmund Kemper you crazy son of a bitch!). I really like Jonathan Groff, and I like that this takes place during a time when serial killer and psychopathic pathology weren’t really understood. I have a feeling I’ll need to watch this with the lights on, because the trailer is freaky enough on its own.