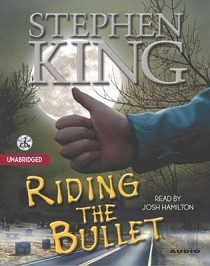 Where Did I Get This Book: Audiobook download from the library!

Book Description: A Stephen King ghost story in the grand tradition, Riding the Bullet is the ultimate warning about the dangers of hitchhiking.

A college student’s mother is dying in a Maine hospital. When he hitches a ride to see her, the driver is not who he appears to be. Soon the journey veers off into a dark landscape that could only be drawn by Stephen King.

Review: As a longtime Stephen King fan, I have read a lot, and I mean a LOT, of his books. But given how prolific of an author he is, and given how long he’s been at it, there are still plenty of King books, novellas, short stories, et all that I haven’t read yet. And while I’ve hit most of his more popular and famous works, it’s the ones that I’ve never heard of that continuously surprise me on my reading adventures. Be it “The Long Walk” (written under his Richard Bachman pen name) or “Charlie the Choo-Choo” (a children’s book based on the book within his “Dark Tower” series), King has popped up and shown me new things in the past couple of years. So when I was looking for something to listen to in the car, I just punched King’s name into the search bar to see what was available. It was then that I saw a title I had never heard of before: “Riding the Bullet”. Seeing that it was short and that I’m always trying to expand my King repertoire, I downloaded it.

Even in a novella such as this one, King has created a cast of characters who feel so well explored and real that I got a sense for who they were and what motivated them. Specifically Alan Parker, our narrator and protagonist who is picked up by a ghost on the night his mother is sick in the hospital. As you read the story you get the sense that Alan has a strained relationship with his mother; though they are really all the other one has, Alan also notes moments in their past that could be seen as abusive. You understand the love he has for his mother and why he would drop everything to try and hitchhike down to see her when she has a minor stroke and ends up in the hospital. But taking this into account, even without King saying how deep this tension and complexity to their relationship goes, it makes things down the line seem believable in the face of incredulity.

I really enjoyed how king took the old urban legend/ghost story of the Phantom Hitchhiker and turned it on it’s head, with the hitchhiker being the one who is potentially in the presence of a ghost who leaves a trinket behind. In the usual story a person picks up a hitchhiker on the side of the road on a dark night. Usually it’s a man picking up a young woman. They talk and connect, telling each other their names and about their lives, and the driver drops the hitchhiker off to wherever she wants to go. They part on friendly terms, but as the driver is driving away he realizes that she left a sweater, or a scarf, or something behind. He tracks down where she lives based on her name, and when he brings the object back to the house, a family member will ultimately tell the driver that “She died ten years ago” or something to that effect. It’s a classic. In this case the ghost is George Staub, the ghost of a man whose grave Alan had seen in a cemetery on his journey south. While on the short but terrifying ride with George, Alan notices the button that the ghost is wearing: “I Rode The Bullet At Thrill Village, Laconia”, a rollercoaster that Alan once had the chance to ride when he was a child. But when he and his mother got to the front of the line, he chickened out. Now instead of trying to return the forgotten object (as there is no question that Staub is a ghost from the get go), it serves as a reminder for what happened that night, and the consequences to what happened in the car between Alan and Staub.

What I liked most about this story is that there is a certain ambiguity to it. The ambiguity isn’t whether or not Alan was picked up by a ghost that night, as that much is clear. But the ambiguity is placed within the choice that Alan makes (which I don’t want to reveal), and whether he ultimately has any culpability in the potential consequences that may, or may not, come because of it. It kind of digs into philosophy about what children owe to their parents, and what parents want from their children. As the story carries on beyond the encounter with the ghost, Alan has to grapple with these questions. He’s convinced that because of his actions, something bad will happen to his mother…. And the tension of this, of finding out whether or not this is the case, definitely had me on the edge of my seat in the car. I think that there wasn’t really a good release for the tension I was feeling, and that I could have used more story to really unwind from all of it. As it was, it just kind of tapered off, and I was left wanting a bit more.

I should also mention that Josh Hamilton was the narrator for this audiobook, and I thought that he did a great job. I know him best from when he played Serge on “Absolutely Fabulous” and also from a driver’s ed video I watched when I was a teenager (I WISH I COULD FIND THIS VIDEO). It’s so important to have a person who really dives into the story they are reading, and I was totally immersed in his narration.

Overall, I enjoyed “Riding The Bullet”, both for it’s effective suspense and for the bittersweet pathos that it had. Stephen King is so good at both horror and humanity, and “Riding the Bullet” is a solid example of both.

Rating 7: A solid ghost story with some fun references to various urban legends. King is so good with characterization that while I felt more could have gone into this book, I got a feel for Alan and George Staub alike.

“Riding the Bullet” is included on the Goodreads lists “Riders Up!”, and “Theological Weird Fiction”.

Find “Riding the Bullet” at your library using WorldCat!