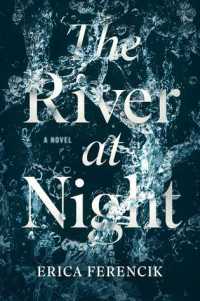 Book: “The River At Night” by Erica Ferencik

Book Description: A high-stakes drama set against the harsh beauty of the Maine wilderness, charting the journey of four friends as they fight to survive the aftermath of a white water rafting accident, The River at Night is a nonstop and unforgettable thriller by a stunning new voice in fiction.

Stifled by a soul-crushing job, devastated by the death of her beloved brother, and lonely after the end of a fifteen-year marriage, Wini is feeling vulnerable. So when her three best friends insist on a high-octane getaway for their annual girls’ trip, she signs on, despite her misgivings.

What starts out as an invigorating hiking and rafting excursion in the remote Allagash Wilderness soon becomes an all-too-real nightmare: A freak accident leaves the women stranded, separating them from their raft and everything they need to survive. When night descends, a fire on the mountainside lures them to a ramshackle camp that appears to be their lifeline. But as Wini and her friends grasp the true intent of their supposed saviors, long buried secrets emerge and lifelong allegiances are put to the test. To survive, Wini must reach beyond the world she knows to harness an inner strength she never knew she possessed.

With intimately observed characters, visceral prose, and pacing as ruthless as the river itself, The River at Night is a dark exploration of creatures—both friend and foe—that you won’t soon forget.

Review: As I have mentioned before, I have some serious guilty pleasures (though I don’t REALLY believe in guilty pleasures when it comes to reading) when it comes to the books that I stack up on my nightstand. One of those guilty pleasures is wilderness survival horror/thriller. I am not an outdoorsy person by any stretch of the imagination beyond the occasional hike or walk, and so I love stories that involve people getting messed up by wilderness. Seriously, I think that I’m so scared of nature that I love seeing fictional people finding terror in the woods, or on the open ocean, or in the mountains, or whatever. This is the girl who freaked out about the Nutty Putty Cave Incident, made her entire book club listen to a long rant about it, and then watched “The Descent” a few times in a row as personal therapy, because she LOVES that movie due to the wilderness survival theme. So yeah. When I found a book that kind of sounds like “The Descent” exists, but takes out the cave, replaces it with a river, and replaces monsters with tangible real life horrors… Oh, I was so there.

“The River At Night” even seems like “The Descent” in it’s premise, at least a little bit. A group of ladyfriends go on a trip that involves adrenaline pumping extreme sports, with one of them recovering from a serious loss in her life while the others don’t really know how to approach her about it. Winifred is our protagonist, and she is still reeling from her divorce and the death of her brother Marcus. Her friends Pia, Sandra, and Rachel have always been her travel companions, on out-there and intense adventures (thanks to Pia, a true free spirit with no fear), and while Wini has reservations, the thought of white water rafting in the Maine Wilderness sounds… fun? I will be the first to admit that these four women are all pretty two dimensional caricatures, with the self involved adrenaline junkie (Pia), the tightly wound recovering addict (Rachel), the quiet sweetheart with a troubled home life (Sandra), and the wounded but determined wallflower (Wini). And I will also be the first to admit that some of the situations they found themselves in were a bit convenient, and cliche, and a little bit farfetched.

But guess what? I didn’t care because DAMN was “The River At Night” a fun as hell read!!!!

“The River At Night” has just the right amount of suspense, as well as the right amount of relationship tension, that I had a hard time putting it down once I was completely absorbed by it. I had thoughts on where things were going to go, plot wise, but I was kept guessing for a lot of the big reveals. Ferencik did a really good job of building up the tension and setting the scene, and I felt like I could very easily and plainly see the Maine Wilderness as I made my way through the story.

I also really did like Wini as a protagonist. She is, of course, the character we get to know the best, and I felt like I understood her motivations in every choice that she made. I felt for her and I really did connect to the undercurrent of pain that she was fighting against, be it the end of her marriage or the loss of her brother, who was mute, and never really fit in outside of when he was with her. Her guilt in both of these losses was never overdone, but it was always present, like a very sad elephant in the room. It was pretty refreshing that Wini and her friends were all women who were encroaching upon middle age, an age range that we don’t really get to see much when it comes to women in books such as these. The way that they interacted with each other was pretty believable in terms of how sometimes friendships can be rife with tension, especially friendships that have gone on for so long and have seen so much. I believed every single action and choice that each of the characters made, and while I liked some more than others (Rachel was just the absolute worst and Pia was also pretty insufferable) I think that each of them added a unique piece to the whole of the story.

On top of that there were very sweet moments involving Wini and a character who is introduced a little more than halfway through the story. I don’t want to give any of it away, but just know that I thought that it was very touching for a book that had a slew of moments where I thought I was going to fall of my seat because of the ratcheted up tension. It was nice to see some legitimate moments of tenderness, even if some of the circumstances were a bit hard to swallow, realism wise. I absolutely found myself a bit teary eyed at a few of these moments, especially when Wini was thinking about Marcus and how she felt she failed him.

Realistic or not, “The River At Night” was an unsettling and adrenaline pumping survival thriller that captured my attention for a full evening. Thriller fans, MAKE NOTE. This will be a great book for the upcoming summer months to take along on a vacation.

Rating 9: Super fun, pushing all my guilty pleasure buttons, and suspenseful as all get out. I really enjoyed “The River At Night” and think that any fan of a nature survival thriller should check it out ASAP.

Find “The River At Night” at your library using WorldCat!