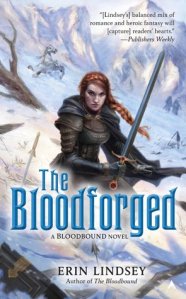 Book: “The Bloodforged” by Erin Lindsey

Book Description: As war between Alden and Oridia intensifies, King Erik must defend his kingdom from treachery and enemies on all sides—but the greatest danger lurks closer to home…

When the war began, Lady Alix Black played a minor role, scouting at the edge of the king’s retinue in relative anonymity. Though she’s once again facing an attacking Oridian force determined to destroy all she holds dear, she is now bodyguard to the king and wife to the prince.

Still, she is unprepared for what the revival of the war will mean. Erik is willing to take drastic measures to defend his domain, even if it means sending Prince Liam into a deadly web of intrigue and traveling into the perilous wild lands of Harram himself.

Only the biggest threat to the kingdom might be one that neither Alix nor Erik could have imagined, or prepared for…

Review: This book needs one subtitle, and one subtitle only: “The Bloodforged: A Lesson in Going from Bad to Worse.” Not in quality, mind you. But the plot…phew! War and politics aren’t fun for anyone it seems!

The story picks up six months after the great battle that ended the previous book, and Alix’s kingdom is still very much at war. And not just any war, a war they are well on their way to losing. As Rig reports back from the front line (being now the General of the King’s armies), they only have a few months left unless they can secure aid from their neighboring countries. And thus Lindsey neatly separates all of our favorite main character off onto dangerous diplomatic missions where we spend a good amount of time wondering who has it worse.

First off, there is a major change in style for this book from the first. While it starts off from Alix’s perspective, it is quickly established that we will be following three other characters, primarily. Liam, who is sent to discover what is delaying the launch of a promised fleet of ships from the neighboring republic. Erik, who along with Alix, begins a treacherous trek through the mountains, home of the fierce mountain tribes, to reach their other neighbors who are also dilly dallying about committing to help. And Rig, back off to the front lines and tasked with holding the enemies at bay while reinforcements are begged for by the others. Alex, really, gets much less page time than the three others, and while at first I was frustrated by this change, I soon found myself equally invested in the tales of these three men.

Even more so than the first book, this second story in the series pushes even further away from any “fantasy” trappings. This book is largely about war tactics and political tactics. Again, it is hard to figure out which would  be more painful to have to deal with. Poor Liam, new to his role as crown prince, is completely out of his league trying to navigate the political maneuvering of a republic whose players are all focused more on re-election than in helping him uncover the mystery of the sabotaged fleet, all while fighting off attempts on his life. And poor Rig. Fighting a losing battle on the kingom’s borders, not knowing when or if help will arrive. Even worse, he discovers that there is at traitor in his midst. And then Erik and Alix, their perils are perhaps the most straightforward, but just as dangerous. Cold, hunger, snow, and wild tribesman who don’t turn a friendly eye on trespassers all present hindrances on their attempts to reach their allies across the mountains. All of these three stories were intriguing and I would have a hard time picking one as a favorite. This is a huge win for a second book in a series where our main character is pushed to the side in favor of splitting the narrative between three other characters who had largely been only secondary in the first book.

Another change is the shift in romance. Obviously, our newlyweds, Alix and Liam, are almost immediately separated which marks a rather distinct end to any expectations that this book was going to have much happy romantic fluff in it. Instead, the book shifts to focusing on those left on the outside of this relationship, most notably Erik who had given up his attachment to Alix in favor of supporting her and maintaining a relationship with his newly discovered brother. Turns out feelings don’t just disappear. Further, Liam is blissfully unaware of the admiration (crush) that one of his fellow soldiers has for him. I appreciated that both of these mini arcs were handled respectfully and honestly. Liam’s naivety was endearing and hilarious at times. And I just felt sorry for Erik much of the time as it was always clear that Alix’s heart was forever Liam’s.

One flaw of the book was the lack of resolution to a few key points. Liam’s admirer is never really confronted, and the story line just fades away completely in the end without it ever being addressed. More frustrating, the spy in Rig’s camp is not outed in this book as well. More so with this second point than the first, some of these dropped plotlines may be simply being left for the final book in the trilogy.

As I said, the magical aspects of this book were largely pushed to the background. However, it does come roaring back in the end of the book, though this does result in a big of a cliffhanger. So , be warned of that. This book does need to be read after the first one, and does end in such a way that would be unsatisfying if you’re not on board for a third book. And, like I said at the beginning, things go from bad to worse in many ways, so readers are left on tenterhooks for the fate of the realm and our favorite characters by the end. I have no idea how Lindsey is going to resolve all of these factors, but I’m excited to find out!

Rating 8: A solid sequel that surprised me in many ways!

Find “The Bloodforged” at your library using Worldcat!