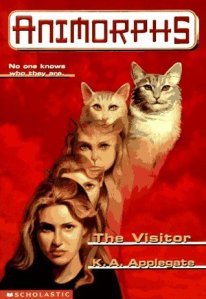 Where Did I Get this Book: own it!

Book Description: Morphing is certainly more fun than Sega — you can soar as an eagle and walk as a cat. But being an ANIMORPH is by no means just fun and games. Rachel knew better than anyone. One of her best friends, Melissa, is acting very strange. And it looks like Melissa’s dad, who is also the school’s Assistant Principal, may be connected to evil aliens. Rachel can’t tell Melissa what the ANIMORPHS have learned, but Melissa doesn’t seem interested in talking to Rachel these days anyway. Could Melissa be one of “them?” With the help of Jake, Cassie, Tobias and Marco, Rachel plans to enter her friend’s house as a cat, intent on unlocking the secrets from within. If only Rachel could keep her mind off mice…

Plot: Fun, not-plot-related note, this was the first Animorphs book I read, because I was given it for a Christmas present by a relative who simply saw a cover with a cat and thought “Hey, Serena likes cats…” And thus, an addiction was started!

The plot! The Animorphs aren’t quite sure what they’re supposed to be doing in this whole “battle the Yeerks” thing after their disastrous attempt at infiltrating the Yeerk pool in the last book. So, like all good decisions, they decide to simply follow around the one Controller (other than Tom) they know about: their vice principal Mr. Chapman. (This is such middle school greatness! Cuz of course a Yeerk big bad would be a school vice principal!) And they’re in is Rachel’s friend Melissa, Chapman’s daughter. This being Rachel’s story, she is the one to morph Melissa’s cat Fluffer McKitty (actual cat’s name!) and infiltrate her friend’s home. What she finds is a boatload of teen sadness and a secret basement set-up where Chapman and Visser Three discuss their evil plans to take over the world. Visser Three, however, is of the paranoid type, and after noticing the suspicious house cat lurking down there once,  is not about to take any chances a second time. Thus opening the final act of the story in which Rachel is carted off in a kitty carrier and barely escapes with her life!

Xena, Warriar Princess: Rachel is probably my favorite character (though Tobias and Marco give her a run for her money). In the other books, she’s portrayed as a rather simple example of the “heroically brave” one. So, it’s always interesting reading her books and getting to see beneath this front that she puts up for her friends. I had completely forgotten about her friendship with Melissa (and I’m pretty sure there’s not much more of it going forward), but it was a lovely glimpse into how seriously and deeply Rachel understands the word “friendship.” There are also plenty of examples that highlight Rachel’s tendency to charge headfirst into things and to believe that she needs to shoulder things alone. After getting spotted by Visser Three the first time she goes in as a cat, she is careful not to mention the incident to her friends, since she knows they will insist she not repeat the tactic going forward. And, given what happens…probably not the best idea, Rachel! But her bravery isn’t simply foolish headstrongness, she’s actually just that willing to make the sacrifices that are needed. Towards the end, when she thinks all is lost, she insists the others flee and that she’ll go down fighting alone. And it’s clear that this isn’t just lip service. She is truly just that willing to die for her friends.

One last note, in this book we get Rachel’s reason to continue this fight. And, no surprise given her characterizations that I discussed above, it’s because the Yeerks have hurt her friends, namely Melissa whose parents are both Controllers and have withdrawn from her completely:

Next time Marco asked why we were fighting the Yeerks, I knew I would have a whole new answer. Because they destroy the love of parents for their daughter. Because they made Melissa Chapman cry in her bed with no one to comfort her but a cat.

Our Fearless Leader: Jake’s main event in this book is spending waaaaay too much time as a flea riding around on kitty!Rachel. Turns out that Tobias (couples watch!) doesn’t quite believe Rachel when she claims nothing happened after her first trip in the house, and so the others come up with the brilliant plan of Jake going in with her. As a flea. He’s got a few funny lines towards the end, and it’s kind of relief to realize that Jake has a sense of humor, as all too often if feels like he’s just stoic-leader-“we must be responsible!!”-Jake.

A Hawk’s Life: Poor Tobias. (Obviously). But his time in this book is spent on some of the less sexy tasks. Like chasing an angry tom cat (original Fluffer’s not too keen on these random teens chasing him around the yard every night), catching shrews for Rachel to morph, then having to rescue kitty!Rachel at the very end. A feat that I’m not sure a red tailed hawk could even pull off, given the size and weight of your average tom cat.

Peace, Love, and Animals: Cassie doesn’t have a whole lot going on in this book. In the beginning there’s another example of the fact that she’s much better at morphing than the others. While de-morphing from birds, the others all look disgusting, while Cassie manages to save her wings for last and go for the “angel-like” look. She, along with Tobias, also notices that Rachel is acting strange after her first trip into the house.

The Comic Relief: Marco, too, doesn’t do a lot in this book. Though his quippy lines are still great! He does get to drive around a few bulldozers in the final confrontation at the end, which I think is our first example of Marco’s terrible driving. I do believe it comes up again later…with some disastrous results!

Best (?) Body Horror Moment: I’m sure if we had gotten an actual scene of Jake morphing the flea, that would have been the hands down winner. And really, morphing  a cat seems like one of the better options. The shrew…not so much. So, not really disgusting, but shrews in general seem like a morph to avoid given the extreme panicky state of their little rodent minds. Well…there you go…”little rodent minds” is disgusting enough!

Couples Watch!: Given that this is a Rachel book, we get a lot of Rachel/Tobias action. They’re pretty adorable, and by far my favorite couple (sorry Jake/Cassie, there’s just no competing with the “one of us is a hawk!” angst/tragedy!) We get a very pointed moment where Tobias privately thought speaks Rachel to be careful when she’s infiltrating the house. Not to mention his insight into her character to realize something’s up, and the dramatic rescue at the end!

If Only Visser Three had  Mustache to Twirl: I’m pretty sure that Visser Three wants to have his own cat. He spends a good amount of time admiring Rachel’s cat morph in this book, even going so far as to say that it’s a shame that the cat species is too small to be a good Yeerk host. Combined with the tiger-love from the last book…yeah, the Visser’s a cat person.

Adult Ugly Crying at a Middle Grade Book: Oh man, these books! In this one, we get the heart breaking scene of Melissa crying on her bed alone, cuddling kitty!Rachel because she doesn’t understand why her parents suddenly stopped loving her. And then later, when kitty!Rachel is being carted away in a cat carrier by Mr. Chapman, Melissa starts crying and asking why her cat is being taken away and when she finally gets an answer she’s like “But…didn’t you hear me before? I was crying!” and he’s like “Oh..were you?” It’s so awful. Another insight into how truly horrible the Yeerk invasion in when you think of these types of ramifications. It’s not just the hosts who are being hurt.

What  a Terrible Plan, Guys!: So, to catch Fluffer so that Rachel can acquire him, they decide that the absolute best plan is for Rachel to first morph a shrew and then run around as bait to lure Fluffer down from the tree. Yes. This plan is as dumb as it sounds.

I have a feeling that many of these will be Marco quotes, but who cares! Here we have Marco’s insights on fashion. Background info: the Animorphs all have to morph in skintight clothing so as not to de-morph and be naked.

“Not Fantastic Four. I’m thinking more an X-Men kind of thing. It’s not about being identical, it’s just about having some style. Right now, if anyone saw us, they wouldn’t think ‘Oh, cool, superheroes,’ they’d think ‘Man, those people do not know how to dress.’”

The scorecard goes unchanged in this one. Not much really happens as far as a win/lose scenario.

Rating: A slower book than the first, but a deeper look into the truly awful, and often more unseen, side effects of the Yeerk invasion.

Note: I’m not going to rate these books since I can’t be objective at all! But I’ll give a one sentence conclusion and you can take from that what you will!