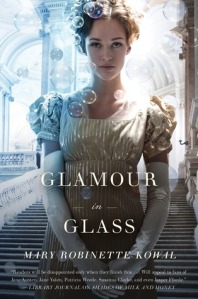 Book Description: In the tumultuous months after Napoleon abdicates his throne, Jane and Vincent go to Belgium for their honeymoon. While there, the deposed emperor escapes his exile in Elba, throwing the continent into turmoil. With no easy way back to England, Jane and Vincent’s concerns turn from enjoying their honeymoon…to escaping it. Left with no outward salvation, Jane must persevere over her trying personal circumstances and use her glamour to rescue her husband from prison…and hopefully prevent her newly built marriage from getting stranded on the shoals of another country’s war.

Review: The second in the “Glamourist Histories” sereis, “Glamour in Glass” resolved many of the issues I had with the first book and introduced an expanded world and magic system.

While the appeal of the first book lay largely in its comparisons to a Jane Austen novel with magic, this aspect was also its biggest downfall. Let’s face it: more often than not, being compared to a Jane Austen novel is a kiss of death for many historical books since it will only raise expectations to impossible heights. While “Shades of Milk and Honey” wasn’t sunk by the comparison, it didn’t do the story any favors either. The plot devices or characters who struck to closely to aspects of “Emma,” “Sense and Sensibility,” or “Pride and Prejudice” were at best distractions and at worst lacking the heart and wit that lies at the core of these originals. However, this book, taking place after the marriage of Jane and Vincent, is freed from these comparisons as it ventures into unknown territory to Jane Austen stories: Life after the wedding.

I enjoyed reading about Jane and Vincent’s struggles learning to adjust to married life. While very much in love, the reality is that they still have much to learn about each other, both in regards to their own personal relationship, and with how they balance their “professional” lives as gifted glamourists, each in their own way.

The expanded descriptions and explanations for this magic system were particularly interesting. It is a very unique take on magical and I enjoyed discovering more about how it work and the varying ways it can be adapted for different uses. I remember noting in my last review that this type of magic seemed as if it would have more important applications than simply as an art form, and this book explores this concept, much to my delight. Particularly, the book dives into the ways that glamour magic is used as strategy in military maneuvering.

As the description highlights, there is much more action in this story, particularly for Jane. I enjoyed watching her make proactive choices, rather than simply react to the circumstances presented to her.

My only complaint was the decreased role that some of the original characters played in this story. While the setting places some obvious constraints on the involvement of these characters (obviously Melody would not be on their honeymoon with them!), I still missed them.

All in all, this book improved on both of my complaints of the original: freeing itself from comparisons and expanding the use of its magic system. If you were only half-sold on the first book, definitely check this one out as I see it as a great improvement in the series.

Rating 8: A step in the right direction for the series as a whole!

“Glamour in Glass” is included on these Goodreads lists: :Regency Fantasy” and “Historical Paranormal Romance.”

Find “Glamour in Glass” at your library using WorldCat.

Previously Reviewed:“Shades of Milk and Honey”

One thought on “Serena’s Review: “Glamour in Glass””