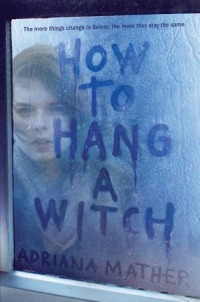 Book: “How To Hang a Witch” by Adriana Mather

Book Description: It’s the Salem Witch Trials meets Mean Girls in a debut novel from one of the descendants of Cotton Mather, where the trials of high school start to feel like a modern day witch hunt for a teen with all the wrong connections to Salem’s past.

Salem, Massachusetts is the site of the infamous witch trials and the new home of Samantha Mather. Recently transplanted from New York City, Sam and her stepmother are not exactly welcomed with open arms. Sam is the descendant of Cotton Mather, one of the men responsible for those trials and almost immediately, she becomes the enemy of a group of girls who call themselves The Descendants. And guess who their ancestors were?

If dealing with that weren’t enough, Sam also comes face to face with a real live (well technically dead) ghost. A handsome, angry ghost who wants Sam to stop touching his stuff. But soon Sam discovers she is at the center of a centuries old curse affecting anyone with ties to the trials. Sam must come to terms with the ghost and find a way to work with The Descendants to stop a deadly cycle that has been going on since the first accused witch was hanged. If any town should have learned its lesson, it’s Salem. But history may be about to repeat itself.

Review: I need you, readers, to go back and read that description. I will wait…

Okay, did you read it again? Does it not sound absolutely BANANAS?!?! If you said anything other than ‘yeah totally’, I want to know what your life is, because to me this is totally bonkers. Which is why I put it on my list, of course. Because you have a YA novel about teenage witches in Salem, Massachusetts, and the teenage girl descendent of Cotton Mather, written by an ACTUAL descendant of Cotton Mather, that has magic, bitchy teen girls, a Puritan era curse, and a ghost who is a partner in detection.

Look, I’m going to be honest. There are many thing that I would criticize: The writing is clunky, Sam is very much a stereotypical ‘I’m so edgy and no one understands me!’ protagonist, the dialog borders on unbelievable, the metaphor of witch hunts as modern day bullying is kind of ham fisted, and there were so many cliches that I lost track of them. But guess what? I DID NOT CARE!!!  All these things aside, it pretty much met all the needs that I needed it to meet! “How To Hang A Witch” by Adriana Mather is a sanitized version of “The Craft” and “American Horror Story: Coven” and yes, it’s over the top and silly, but I’m not mad because I thoroughly enjoyed the time I spent with it.

Why, you ask? Well, lots of reasons. I like witch stories. I liked that Mather has clearly done a lot of actual research about the Salem Witch Trials and the history of the town, and her family. I like that she does manage to incorporate a lot of that history into the narrative, even if it’s forced in at times. And I was kind of left guessing about who the perpetrator of the curse was, as Mather does put in some good red herrings that did distract me here and there. What could have easily just been a gimmicky book written by a descendant of someone who was there turned out better than it could have. I also did ultimately like our main character, Sam Mather, even if she is close to falling into many a trope in YA literature. As a descendant of Cotton Mather, of COURSE she’s a target for bullying by The Descendants, who are descendants of accused witches. So I was able to forgive Sam’s dark sulking, because unlike other sulking protagonists in YA stories that shall go unnamed, her father is in a coma, her mother is dead, all of her friends have had terrible things happen to them, and now she’s being tormented by most everyone around her. EVEN THE TEACHERS, I kid you not. Because of all this I get her defensiveness and I’m more willing to forgive it, even if it all seemed a bit heaped on. True, when in the first paragraph she warned the reader that she’s super sarcastic I was skeptical, and her constant spats with most everyone in town were also worrisome and repetitive. But as the book went on that forced edginess eventually tapered off, and Sam became more natural in her interactions with those around her, so it didn’t feel as ridiculous. It would have been easy to make it her against the world and that’s it, but she grew and developed, and therein found more common ground with others, which made her more sympathetic and easy to swallow.

But we do need to talk about the love triangle. Because boy, is it a doozy in this one. First you have Jaxon, the nice boy next door type who believes in Sam and is kind and nice to her, if not a little flat and boring. He’s fine. He’s a pretty clear ‘best friend I don’t have feelings for or do I?’ contender. But then…. Then there’s Elijah. Elijah, the thoughtful, brooding, sarcastic, GHOST. A GHOST, GUYS.

So yeah, that happened. Man, I really do hate love triangles, especially when there is seriously no reason for them. But I did like Elijah, because there was enough sarcastic and snarky personality to him that he wasn’t just an ‘awwwww, woe is meeeeee’ stereotype of the supernatural love interest. He and Sam always felt like they were on equal footing in their investigation of the mystery of the curse, and while he may not have totally adhered to a lot of Puritanical values for sake of storytelling, it was a pretty okay representation of parties equally giving and taking. His motivation was his own as well, with his backstory tied up in the curse and the tragedies of the Salem Witch Trials, so it didn’t feel like he was just thrown in for the love angle alone. He was at least justified in being there. Him being a ghost was a bit silly, sure, but it did add a tragic spin to his romance with Sam. I think that the friendship and intimacy between the two also emphasized that Sam has a harder time fitting in with her living peers (which is dangerous because she teeters towards ‘I’m not like the other girls’-dom). But Jaxon just felt unnecessary to me, and shoe horned in because there needed to be some extra drama in the romance department for whatever reason. True, he starts by serving as the one person who trusts and supports Sam, but then that is rendered unnecessary as time goes on. I’m wondering if he was just there to potentially set up more drama down the line, because looking at Goodreads it looks like this is considered the first in a series. Given how it ended, in kind of an ‘end of “District 9″‘ sort of way…. well, I’d probably read the next one if it does come to fruition.

So to recap: this book is cheesy, silly, and painted with a broad brush, but I found myself deeply entertained while reading it. Is it going to be something I’d point to if you are genuinely interested in reading about the Salem Witch Trials? Hell no. Is it something I’d point you to if you wanted a spot of fun and a quick read about teen witches? Hell yes. “How To Hang A Witch” was a doozy, and I just decided to buckle up and enjoy the ride, which worked in my favor. No regrets!

Rating 7: At times cheesy and predictable, but also very fun and a nice fluffy read, “How To Hang A Witch” was an entertaining book with characters I cared about and a sappy romance I enjoyed. It’s bananas and I loved that about it.

“How To Hang A Witch” can be found on the following Goodreads lists: “YA & Middle Grade: The Salem Witch Trials”, and “Horror Extravaganza: 31 Days of Halloween”.

Find “How To Hang a Witch” at your library using WorldCat!

One thought on “Kate’s Review: “How To Hang a Witch””