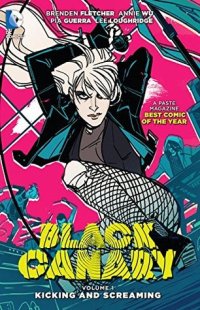 Book Description: Dinah Lance hits the road! After years as a soldier and vigilante, the last place Dinah saw herself is on stage…but she’s quickly learning she’d die to protect the gang of misfits she’s fallen into. And she just might have to—for some reason, the newly rechristened band Black Canary seems to be a magnet for trouble…and Dinah’s not gonna believe it when she finds out the reason why!

Review: I love many, MANY of the DC heroines, but I have a very special place in my heart for Dinah Lance, aka Black Canary. From “Birds of Prey” to “Justice League Unlimited” I’ve enjoyed just about every iteration I’ve seen of her. And honestly, her Canary Cry is probably one of the best powers one could have. If I could scream at people and totally defeat them, I’d be totally set. Lord knows I scream a lot no matter my mood. So when I saw that she got a makeover recently and was given a new, edgier title, I requested it and immediately fell in love with her new storyline. Dinah in a punk band?! YES PLEASE!!!

Like “The Batgirl of Burnside”, “Black Canary” is trying to give a hipper, edgier feel to one of DC’s heroines. I wouldn’t say most popular, as I would guess that many people don’t necessarily think of her like they think of Batgirl, but Black Canary actually makes sense to be given this kind of makeover. One, she isn’t as popular or well known as, say, Wonder Woman or Batgirl, so this will give her lots of room to grow and be redefined without bringing up inevitable gripings from the fans. Two, Dinah’s origin story has always been a little muddled and crazy, so a new and out there storyline is going to be old hat for her. I loved the idea of making her the lead singer of a band, even if it does seem like it wasn’t as much by the band’s choice as one would think. I also liked the bandmates themselves, as they are all pretty unique and intrepid (and diverse!) characters. Lord Byron the drummer is a hard as nails but incredibly empathetic blend of glam rock and Grace Jones, while Paloma Terrific the keyboardist is a bit more cynical and wary of Dinah. Given that the band is getting into pretty hardcore scuffles ever since Dinah joined, well, who can really blame her? All of these women combine to make a group of uneasy allies, though their common ground is a mysterious little girl named Ditto, the band’s guitarist who doesn’t speak. They all feel protective of this strange child (who gave me serious Eleven of “Stranger Things” fame vibes, albeit unintentional on the creators parts), and when it becomes clear that multiple groups want to get their hands on her, the band unites as one to keep her safe. I loved all of these kick ass women for their strengths and weaknesses alike.

Even one of the main antagonists is given her own thorough and complicated storyline. Bo Maeve, the former lead singer of the band (until she was replaced by Dinah) is out to settle the score with her former bandmates. Bo is portrayed as vain and volatile, who doesn’t take rejection well (she set things literally ablaze when the band kicked her out), and she sees Dinah as her nemesis, striving to rise to her level. But even this nutbag has her moments where I felt empathy for her. And she too cares very deeply about Ditto, even if she never wanted to, so seeing a villain given these complicated emotions is something that I like to see in a comic, especially one geared towards teenager girls and young women. I think that a lot of people could see a bit of themselves in all of these women, Bo included. The other antagonists are a bit more veiled as of now, though Amanda Waller, everyone’s favorite True Neutral character in the DC Universe, has made her presence known, so you know there’s going to be some crazy nonsense going on beyond the aliens we saw this time around. Given that the theme this time was music as power and music as weaponry, I have high hopes that we’ll get more of these theoretical and super neat storylines.

I also LOVE the artwork in this comic. It makes use of vibrant colors and very stark lines, playing special attention to the music scenes. The concerts look like they’re screaming in technicolor, with blues, pinks, reds, and yellows. The art also feels a bit messier but in the best way possible. It’s edgier and sharper, and it just adds to the punk rock feel of the band and the atmosphere. Annie Wu and Pia Guerra (of “Y: The Last Man” fame) did the artwork, and their collaboration mixes together perfectly for the music scenes and the narrative.

I hope that the comics continue with this schematic because I’m LIVING for it.

I’m totally digging “Black Canary” as of now!!! I have hopes that it will keep my interest up and that Dinah Lance gets the proper recognition that she has always deserved. And, uh, hey, maybe Oliver Queen could show up at some point? Please? PLEASE??????

Rating 8: I love Black Canary and so this new version of her has me really, REALLY stoked. The villains were a little on the weaker side this time around, but the characters more than made up for it.

“Black Canary (Vol.1): Kicking and Screaming” is included on these Goodreads lists: “Ladies in Capes”, and “Diverse Heroes in Comics/Graphic Novels”.