All Hallows Eve is nearly upon us, readers, and while we’ll be putting some scary stories out there for you to think about on Halloween proper, this week we have a selection of some good Halloween movies. But maybe not the too scary kind. After all, we can’t all be scary movie junkies like Kate is, as not all of us like being scared. But there are plenty of non scary movies that are perfectly appropriate for the Halloween season. And we thought we’d share some of our favorites with you. Whether they have Halloween settings or spooky themes, these movies are milder, but just as fun to watch during the season of the witch.

What do you do when you infuse a 90s movie with a healthy dose of witchcraft and teen angst? Why, you get “The Craft”, aka the movie that almost every Goth girl in the late 90s and early 2000s took as a how to guide (including Kate). It’s a story of four teenage girls, Sarah, Nancy, Bonnie, and Rochelle, who find out that when they are together they have magical powers. Though they hope to use magic to make their lives better, it becomes all to clear that sometimes magic is too hard to control and has unintended consequences. All four of the actresses do a good job, but the stand outs are Robin Tunney’s Sarah, who plays reluctance and strength with subtle edges, and Fairuza Balk’s Nancy, whose desperation makes her both tragic and terrifying. It’s “Mean Girls” meets “Macbeth”‘s Weird Sisters, and it drips 90s girl power like few other films from that time do.

Joel Schumacher may be remembered these days for his campy and much reviled Batman films (“Batman and Robin” in particular). But the camp and schlock he is good at really added a certain something to the 80s cheese o-rama that was “The Lost Boys”. When brothers Sam and Michael (Corey Haim and Jason Patric) move to a small seaside town in California, they run afoul a group of vampires led by Kiefer Sutherland’s David. They enlist the help of two teen vampire hunters (one of whom is Corey Feldman) and hope to save themselves from the danger they’ve found themselves in. “The Lost Boys” may have some tense moments, but it’s so overwrought with earnest campiness that it isn’t terribly upsetting, just a lot of fun. 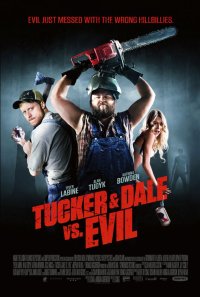 Film: “Tucker and Dale vs Evil”

There are many classic tropes in horror movies, and two of the most overused are backwoods hillbillies, and remote cabins in the woods. “Tucker and Dale vs Evil” takes both of those tropes and makes a movie with a lot of laughs and a whole lot of heart. Tucker (Alan Tudyk) and Dale (Tyler Labine) are two guys who are excited to renovate Tucker’s new vacation home, a cabin in the middle of the woods. But when a group of college kids arrives and makes assumptions about who they are based on their ‘hillbilly’ appearance, a comedy of errors (with some grisly deaths) ensues. Though this is kind of a gory movie, both Tucker and Dale are so hapless and bemused by their situation there are many laughs to be had.

Maybe this is an obvious one, but “Beetlejuice” is a classic haunted house tale that is far more funny than it is scary. When the Maitlands (Alec Baldwin and Geena Davis) die in a tragic accident, their house is bought by New York yuppies with no taste. They enlist the help of an obnoxious demon named Betelguese (portrayed famously and perfectly by Michael Keaton), but then have second thoughts when the goth and morose teenage daughter of the house Lydia (Winona Ryder) is far sweeter than they anticipated. Filled with lots of Tim Burton staples and dark humor, “Beetlejuice” is an enduring classic that stands the test of time. And will never make you look at “Day-oh” the same way again.

I mean, of course. “Hocus Pocus” is quite possibly the Grand Queen of non-scary Halloween movies. The story of the Sanderson Sisters, three Salem Witches awakened in 1993 to the (then) modern world, is a cult classic. The witches may be fish out of water, but that doesn’t stop them from trying to take the souls of Salem’s children to grant themselves eternal life. But three kids and a talking cat named Binx are out to stop them. Bette Midler, Sarah Jessica Parker, and Kathy Najimy bring the hilarious, and sometimes genuinely creepy, Sanderson Sisters to life with unforgettable performances. We would be remiss to leave them off our list, because it is not officially Halloween until “Hocus Pocus” has been watched.

What about you guys? What are your favorite non scary (or scary!) movies to watch during the Halloween season? Let us know in the comments!!