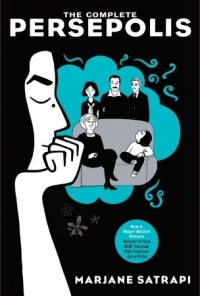 Persepolis is the story of Satrapi’s unforgettable childhood and coming of age within a large and loving family in Tehran during the Islamic Revolution; of the contradictions between private life and public life in a country plagued by political upheaval; of her high school years in Vienna facing the trials of adolescence far from her family; of her homecoming–both sweet and terrible; and, finally, of her self-imposed exile from her beloved homeland. It is the chronicle of a girlhood and adolescence at once outrageous and familiar, a young life entwined with the history of her country yet filled with the universal trials and joys of growing up.

Edgy, searingly observant, and candid, often heartbreaking but threaded throughout with raw humor and hard-earned wisdom–Persepolis is a stunning work from one of the most highly regarded, singularly talented graphic artists at work today.

Review: Every year during Banned Books Week I try to read a book or books that have been banned or challenged. Because damn the man and all that. This time around I thought that it may be the right time to revisit “Persepolis” by Marjane Satrapi, a graphic memoir that has been praised for it’s genius and reviled for it’s content by some people, more recently by a college student in 2015 who wanted it (and other graphic novels) removed from the school curriculum. I first read “Persepolis” in 2009, when a co-worker at my then job let me borrow her copies of Parts 1 and 2, and I really, really liked it (as well as the film that was made based on the books), but had been meaning to re-read the story for a while now. So what better time?

“Persepolis” is a memoir that not only tells a very relatable coming of age story, it also charts a very turbulent time in Iranian history. Satrapi’s parents were militantly anti-Shah, the dictator whose policies oppressed and exploited many Iranians during his reign (a reign that the United States supported because of the profits to be made as a result), so when revolution came, Satrapi’s family had high hopes… But then, those hopes were dashed when fundamentalists took the country over, and war broke out between Iran and Iraq. Satrapi’s story is very straight forward and never delves into over the top dramatics, but through this simple telling also shows the horrors of the unrest during this time period. But along with that we also get the story of a girl who is sent to Austria to spend her teenage years, as her mother didn’t think she would be safe in Tehran anymore given Satrapi’s love of rebellion. So Satrapi tells a story of not fitting in in her home country because of her family’s ideals clashing with the new religious fundamentalism, but also the story of an Iranian girl in the 80s trying to fit in a predominantly Western society that doesn’t quite understand. Satrapi’s self awareness and honesty really drives this book, and so does her penchant for humor and tenderness.

Satrapi does a great job of showing the experiences of all people in Tehran, and while she never excuses the actions of the crueler and more violent people, you also can understand how Iran got to where it did. She also gives some history lessons in this book about the history of her home country and the Western interference that in part led to the Shah, which in turn led to the Revolution that, to her family, set the country back decades in terms of politics and civil liberties. I have some working knowledge of the history of Iran and the Iranian Revolution thanks to some books that I’ve read about it, but Satrapi does a very good job of contextualizing that through her own personal story, both in the midst of the struggles at home and then her own personal struggles in Austria, a place that was meant to be a safe haven but ended up being incredibly oppressive in different ways.

Satrapi is also very forthcoming about her own flaws and bumps in her life, always portraying herself as a human who isn’t perfect, and is trying to find herself. There were a few actions that she took in her youth that definitely made me wince as I re-read this book, as sometimes she did do things that were cruel or selfish. She makes no excuses for these actions, but the reader can’t help but feel sympathy for her because of the various experiences she had that led to these points. If anything it made her all the more relatable, because I’m sure many of us have done things that we are not proud of. She just has the courage to put these things out in the open.

And finally the artwork in this book continues to charm me the second time around. I love the simplicity of it all, a style that can portray a wide range of emotions and motivations, from humor and love, to abject fear and sorrow. The images juxtapose a time of war and ruin with a girl’s coming of age, and it is incredibly effective.

The story itself is broken up into separate parts that all represent a key moment in Satrapi’s life, and I love how they all fit together as a whole while standing on their own as well. It’s such an interesting way to tell such a complex story, and I think that it works very well.

It’s really no secret why people want this book to be banned. From portrayal of Muslims as just normal people, to Satrapi’s frank expressions of her sexuality, to the negative lights that are shed upon Wester Cultures during the critiques of them, “Persepolis” has ruffled many feathers and will probably continue to do so. But it’s such an important and wonderful graphic novel that those who pass it over or openly condemn it are really, really missing out. It remains one of my favorite graphic novels, and I think that it should be required reading for both comics fans and history buffs alike. It was great revisiting “Persepolis” for Banned Books Week.

Rating 10: An astounding, personal, and fabulous graphic novel about coming of age in societal upheaval. Marjane Satrapi’s graphic memoir is insightful, tender, funny, and in some ways haunting. A must read.

“Persepolis” can be found on the following Goodreads lists: “History Through Graphic Novels”, and “Comics and Graphic Novels by Women”.