Book Description: Kami has lost the boy she loves, is tied to a boy she does not, and faces an enemy more powerful than ever before. With Jared missing for months and presumed dead, Kami must rely on her new magical link with Ash for the strength to face the evil spreading through her town.

Rob Lynburn is now the master of Sorry-in-the-Vale, and he demands a death. Kami will use every tool at her disposal to stop him. Together with Rusty, Angela, and Holly, she uncovers a secret that might be the key to saving the town. But with knowledge comes responsibility—and a painful choice. A choice that will risk not only Kami’s life, but also the lives of those she loves most.

Review: I finally got around to picking up the last book in the “Lynburn Legacy” trilogy. And, while I was left a bit cold by the second book in this series, I am happy to report that “Unmade” pulled the series back from the edge and ended on a solid note.

But first, before I go into any details about the book itself, can we take a moment to be aghast together at this cover? For the sake of discussion, here are the three covers in the series: 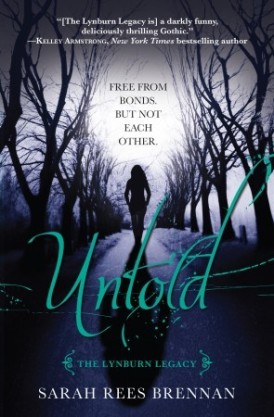 Obviously there was a huge shift between the first book and the second. My guess is that the first cover was coming across as “middle grade” and the publishers thought to “age it up” by switching cover art. But to this? Generic back-of-girl-walking-into-distance artwork? At least the first was interesting and unique. The second two just look like every other book on the shelf. I’ve never been a fan of the titles of these books, either. They say next to nothing about what the story is (what genre is this? what time period? what’s unique here?). And this problem is only exasperated by these generic covers. And what’s worse, by the time we get to the third one, the generic cover actually makes no sense! There is absolutely zero reference to the ocean or to Sorry-in-the-Vale even being anywhere near the ocean in these books. While the second cover at least draws feelings of mystery and suspense with a creepy woods (there is at least a creepy woods in the story), the third cover looks like something from Spring Break: Hawaii!! It’s truly awful. I have many feelings re: book covers, and usually I’m good at tamping it down, but this time…

But, enough of that, on to the review! Kami and co. start off this book in a pretty low spot. Rob Lynburn has taken control of the town, Jared is missing, presumed dead, and Kami sharing a sorcerer/source bond unwillingly with Ash. It’s all very awkward and uncomfortable. First off, I commend Brennan for “going there” with the darkness in this book. It doesn’t pull any punches with the horror of what the Lynburn legacy of magic and might stands for, and the type of rule that Rob hopes to usher back in. With that, however, comes a challenging hole to be dug out of. I was concerned that some type of magical out was going to appear, but for the most part I was satisfied with the direction this story took in its final third. While I’ve always wished for a bit more explanation into the magic system (it seems like people just “have” powers and can then do anything. Harry Potter has spoiled an entire generation to fantasy reading where we expect to hear about our characters “learning” their magic!), over all I the expanded ideas with regards to connections between sorcerers and sources was entertaining and interesting.

As I’ve said in my previous two reviews, the characters are what drive this story and the reason I kept returning to the series. Kami is such a healthy, balanced teenage girl protagonist. She struggles with not only the fantasy elements of the story, but problems that many teenagers face: shifting relationships with parents, connections with siblings, evolving friendships, and, of course, romance.

The romance is probably the weakest element of this story for me. By the end of the second book, I thought things had been largely resolved in that area and I was looking forward to a story more closely focused on plot than on the romance angst. Unfortunately, it is made a thing again. And really, because it had been seemingly resolved in the second book, it felt like hoops and out-of-character behavior had to be used to create drama in this department, a writing trope that I never appreciate. At this point in the story, especially when there were serious events going on in life, the relationship angst felt contrived and I almost was rooting for Kami to just slam the door in Jared’s whiny, mopey face once and for all. Alas, she did not. Ultimately, this also resolved itself in a surprisingly satisfying manner by the end of the book, but I feel like a lot less page time could have been devoted to the whole plot line to begin with.

There are moments of this story where the dialogue is laugh-out-loud in its witticisms, but I’ll be honest, there were a few parts that were cry-worthy as well. All in all, it was a very satisfying conclusion to a solid trilogy in the YA fantasy genre. If any of these elements are up your alley, I definitely recommend checking out this series!

Rating 7: A satisfying conclusion full of witty and fun characters!

“Unmade” is included on these Goodreads lists: “Diversity in Young Adult and Middle Grade” and “What a Wonderful World – A Celebration of Imaginative World-Building.”