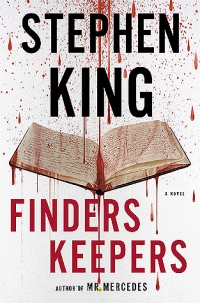 Where Did I Get This Book: The Library!

Book Description: “Wake up, genius.” So begins King’s instantly riveting story about a vengeful reader. The genius is John Rothstein, an iconic author who created a famous character, Jimmy Gold, but who hasn’t published a book for decades. Morris Bellamy is livid, not just because Rothstein has stopped providing books, but because the nonconformist Jimmy Gold has sold out for a career in advertising. Morris kills Rothstein and empties his safe of cash, yes, but the real treasure is a trove of notebooks containing at least one more Gold novel.

Morris hides the money and the notebooks, and then he is locked away for another crime. Decades later, a boy named Pete Saubers finds the treasure, and now it is Pete and his family that Bill Hodges, Holly Gibney, and Jerome Robinson must rescue from the ever-more deranged and vengeful Morris when he’s released from prison after thirty-five years.

Not since Misery has King played with the notion of a reader whose obsession with a writer gets dangerous. Finders Keepers is spectacular, heart-pounding suspense, but it is also King writing about how literature shapes a life—for good, for bad, forever.

Review: The flashback to the “Bill Hodges Series” continues with the middle book, “Finders Keepers”. I got my grubby little paws on this book shortly after I had listened to “Mr. Mercedes” on audiobook, but couldn’t wait for the CDs to arrive so I just grabbed the print book. Sorry, Will Patton, I was just too anxious to dive right in. The upside with reading this book in print form was that I basically devoured it once I had it in my hand. I read faster than Will Patton speaks, after all. Eager was I to fall back into the world of Private Detective Bill Hodges and his assistants Jerome and Holly. Eager was I to revisit that horrible and evil Brady Hartsfield, who was left beaten and practically brain dead by Holly in an effort to stop him from blowing up a concert of teenage girls. Eager was I.

So it was too bad that “Finders Keepers” kind of let me down.

It certainly wasn’t the writing. King brings some more great suspense to this narrative, building layer upon layer of serious tension. He starts out with a horrific murder, and doesn’t let the action or intensity die down. Morris Bellamy is like a male and more expansive version of Annie Wilkes, his obsession with his favorite writer pushing him over the edge into violence and madness.He is a very clear threat, and I definitely felt a lot of fear for poor Pete Saubers, a boy whose family is falling into financial ruin and is looking for a miracle. So of course he’s going to take that money that he finds, any empathetic reader would understand it. Had this been any other Stephen King book, I probably would have loved this and bought into it 100%. The problem for me is that this is Book 2 in the Bill Hodges Trilogy. And Bill, Holly, and Jerome do not make an appearance in this book until about one third of the way, and to me that is just far too long to bring these characters back when it is supposed to be the middle part of a Bill Hodges Trilogy. It kind of felt like that King had a new fun idea, and then, knowing he wanted to write more Bill Hodges stuff, decided to throw both themes together to kill two birds with one stone. He did it in a believable way, even connecting the Saubers family to the Mr. Mercedes massacre (Mr. Saubers was one of the victims, left with a permanent limp and few job prospects because of it), but it still felt cobbled together. Perhaps this could be written off as a good way to show that Hodges and Holly and, to a lesser extent, Jerome have started their own detective business together (called Finders Keepers), but it still was a bit too long to keep them away for the sake of the new characters.

And plus, I feel that this story as a whole has just as much to do with Brady Hartsfield as it does with Bill Hodges. Hartsfield has a small role in this, but being something of a vegetable lying in a hospital bed makes it kind of difficult to give him much to do. Given all the weight he was given in the first one, I was expecting a bit more from him, especially since it was pretty clear from the get go that there was more to his story. I think that if this series was more than just three books I would have been a bit more forgiving with not focusing on him as much. I would have felt like there was plenty of time. But with three books in this series, to barely have Hodges’ nemesis, and to keep Hodges and his gang out of it for the first third as well, it just doesn’t feel right.

But there are things here that I really did like. Jerome’s sister Barbara, relegated to role of potential victim in “Mr. Mercedes” gets to do a bit more in “Finders Keepers”. She’s the friend of Pete Saubers’ sister, who is worried about her brother and her family. Barbara is the one who prompts her to go see Hodges about what’s going on in her life. I like the fact that King is trying to have more diverse people in his books as of late, and Jerome and Barabara Robinson work very well as characters and as helpers to Bill Hodges. Perhaps the greatest accomplishment of this book, however, is the progression of Holly Gibney. When we met Holly in “Mr. Mercedes” she was a nervous, unstable wreck who was conquered by her demons. But in “Finders Keepers”, her new found freedom and purpose (and friend group of Hodges and Jerome) has helped her bloom into a confident and savvy detective in her own right. True, she still has some of her hang ups, and her less extreme personality quirks are still quite present (being too literal and lacking any kind of filter), she is far more in control of her nerves and feels a lot better about herself and her life. I love Holly, and she brings her own bit of diversity to the story, being a character who has mental disabilities and may be on the spectrum. King still writes her tenderly and with a gentle touch, but never condescends to her as a character either. Her character development is really the best damn thing about this book, and her friendship with Hodges is very satisfying.

And then there is the fact that Brady Hartsfield seems to be gaining some strange powers…. I thought that this was a real world King story, not necessarily a supernatural one. That isn’t to say that I was irritated with this. I like that King decided to go back to his roots, ALL the way bak to his first book, “Carrie”.

“Finders Keepers” wasn’t as strong as “Mr. Mercedes”, and something of a disappointing distraction from the Hodges/Hartsfield story that is at the heart of this series. But distracted or not, my girl Holly Gibney got some time to shine in this one, and that was worth it. Up next I will take on the last of the trilogy, “End of Watch”.

Rating 7: A solid mystery on it’s own, but it feels like a strange, out of place add on to the overarching story of Bill Hodges. Frankly, it needs more Brady Hartsfield. But Holly Gibney really shined bright.