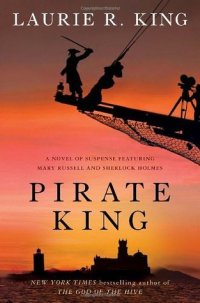 Book Description from Goodreads: In England’s budding silent-film industry, megalomaniac Randolph Fflytte is king. At the request of Scotland Yard, Mary Russell is dispatched to investigate rumors of criminal activities. At Lisbon rehearsals for “Pirate King”, based on Gilbert and Sullivan’s “The Pirates of Penzance”, thirteen blond-haired, blue-eyed actresses meet the real buccaneers Fflytte has recruited to provide authenticity. But when the crew embarks for Morocco and the actual filming, troubles escalate.

Review: I have been reading Laurie King’s “Mary Russell and Sherlock Holmes” series on and off for the past…decade?? A long time is all I know. It’s one of my favorite mystery series, and the fact that I can simply jump into the story at whatever point I left off previously (perhaps years previously) with such ease is a huge mark in its favor. All that said, when I was feeling the need for a little mystery action in my reading cycle, I knew just where to look. And King’s “Pirate King” did not disappoint!

Following the usual track for these stories, the book begins with Mary Russell being sent off on some investigation or another. This right here is one of the reasons I enjoy this series so much. The focus is well and truly on Mary Russell’s character, with Holmes firmly in the supporting role. The fact that I love the Sherlock Holmes mythos so much makes me all the more appreciative of this decision. Like the originals, told from Watson’s perspective, Holmes is a character best appreciated from a slight distance and in sprinklings of narrative brilliance. And Mary Russell, herself, is a strong lead for the series. Adventurous, witty, clever, and full of energy, it has never been a challenge picturing her as the equal and companion of our famous detective throughout the series. She drives the story, and while I always look forward to Holmes’ next appearance, I am never antsy waiting for it. Russell is a great lead on her own.

As noted in the jacket description, this mystery revolves around a silent film production featuring pirates. The film company “Fflytte films” is known for the “realism” in its production quality. So, naturally, this means that the eccentric director must hire “real” pirate actors, rent a pirate ship, load 13 flighty British actresses on board and head off for Morocco, with poor Russell trailing along attempting to solve a mystery of criminality in the production history all while arranging the administrative details of such a venture. No small task!

Mary Russell and Sherlock Holmes, as I mentioned earlier, have always been great characters in this series. That being the case, the strength of individual novels in the series often depends on the supporting characters that are introduced. “Pirate King” has a great cast! The aforementioned eccentric director, his long-suffering cousin who is in charge of arranging the “realistic” pieces (“A pirate parrot!” “A real castle!”), the Moroccan man-of-mystery hired to play the pirate king, and, of course, the 13 actresses and their doting chaperone mothers. It is easy to see why Russell might have been hesitant to sign up for this one!

A few criticism of the book. The pacing was rather uneven. The story gets off to a slow start, at times feeling dragged down by the minutiae of the film industry and the challenges of the bloated cast of characters. While enjoyable, it’s hard to keep track of 13 teenage actress characters right off the bat! But, by a third of the way in, the story really takes off and is highly enjoyable. However, the ending is then wrapped up all too quickly. These abrupt shifts in pace were rather distracting and interrupted the flow of the story, ultimately.

My second criticism will really depend on how much of a mystery element one wants in a mystery series. This book is definitely light on the mystery itself. The investigation that Mary Russell sets out on initially is even acknowledged by herself as likely much ado about nothing. And the additional mystery that is tacked on towards the end has much less to do with an actual mystery than in character analysis. I, personally, was ok with this as I found the adventure and light-hearted tone to be a nice reprieve from the more grim and serious books that came directly previous to this in the series. But if you’re looking for a capital “M” mystery, this might not be your best choice.

All in all, “Pirate King” is another solid entry in this series. While I recommend checking out the other books in the series, especially if you like historical mysteries, it is by no means necessary to have read them all, or any, to enjoy this book.

Rating 7: Another fun adventure with Mary Russell! The pacing in the first and third act were my only holdups, and whether the mystery is compelling enough is going to be highly dependent on reader expectations.

“Pirate King” is included on these Goodreads lists: “The Best British Crime/Mystery Fiction” and “Women who Solve Crimes.”