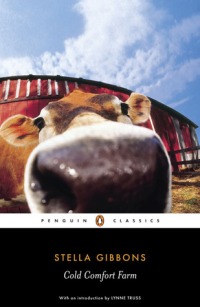 We are part of a group of librarian friends who have had an ongoing bookclub running for the last year and a half. Each “season” (we’re nerds) we pick a theme and each of us chooses a book within that theme for us all to read. Our current theme is “Books with Movie Adaptations.”

For this blog, we will post a joint review of each book we read for bookclub. We’ll also post the next book coming up in bookclub. So feel free to read along with us or use our book selections and questions in your own bookclub!

Where Did We Get this Book: The library!

Book Description from Goodreads: ‘I saw something nasty in the woodshed’

When sensible, sophisticated Flora Poste is orphaned at nineteen, she decides her only choice is to descend upon relatives in deepest Sussex. At the aptly named Cold Comfort Farm, she meets the doomed Starkadders: cousin Judith, heaving with remorse for unspoken wickedness; Amos, preaching fire and damnation; their sons, lustful Seth and despairing Reuben; child of nature Elfine; and crazed old Aunt Ada Doom, who has kept to her bedroom for the last twenty years. But Flora loves nothing better than to organise other people. Armed with common sense and a strong will, she resolves to take each of the family in hand. A hilarious and merciless parody of rural melodramas, Cold Comfort Farm (1932) is one of the best-loved comic novels of all time.

Something I have come to learn as I’ve been reading more outside of my comfort zone is what kinds of books work for me, and what kinds of books just don’t. I really do have to thank our book club for picking books that I wouldn’t otherwise try out, as I do think that that makes me a stronger reader. Of course, this means that sometimes I just don’t connect to a book, and that is what happened with “Cold Comfort Farm”. And it isn’t the books fault. “Cold Comfort Farm” is just one of those books (specifically the ‘eccentric people living in the country being charming and strange as parody’ books) that I have no interest in. The same thing happened with “I Capture The Castle”. That isn’t to say that there weren’t things about the books that I did like. I really liked Flora as the protagonist. I liked that she was very smart and very determined, but I also liked that Gibbons was having a little fun with her and how clueless she was when it came to her privilege. Classism in Britain is so evident and prevalent in a lot of the literature and pop culture that comes from there, and when authors give a nudge-nudge wink-wink to it I find it a bit easier to swallow. Flora certainly means well and isn’t cruel by any stretch, but she is definitely cringe-worthy at times when she’s interacting with the people at the farm and looking through her very urban rose colored glasses.

I also have a feeling that a lot about this book was pretty transgressive when it came out. You not only have a woman coming in and taking over an estate, competently and kindly to boot, but you also have the same women bringing modern ideals and ideas, some of which are still controversial today. I was blown away when there was a scene in which Flora was encouraging Meriam, a farm hand who had just had her fourth unplanned baby, to look into using birth control when she and Seth Starkadder are hoping to give in to their urges. At first I wasn’t certain that that could have been what I was reading, and was very pleased when I confirmed that it was. But then of course for every progressive moment there were moments that betrayed the time period in their sexism and, yes, classism. There was another scene regarding Meriam, who became the object of affection of a bachelor named Urk who had previously been obsessed (And I mean creepily obsessed) with Flora’s cousin Elfine. There was a throw away line about Urk possibly dragging Meriam off and drowning her, but no one really knew, and who would care if he had? Given that Meriam has FOUR CHILDREN I feel like THEY would care. That didn’t sit with me well at all. Perhaps it was meant to be a part of the parody, but it didn’t feel that way.

This book wasn’t for me, but I do see it’s merits to be sure. If you like tongue in cheek books about country eccentrics, definitely check out “Cold Comfort Farm” because it seems to be a classic of the genre.

I agree with a lot that Kate said. Bookclub has been a great learning opportunity that has helped me refine my thoughts on what I do and do not enjoy reading. Before bookclub, I would have said that I enjoy almost all historical fiction, especially the kind about eccentrics living out in the British countryside. However, like Kate, I couldn’t get completely behind “I Capture the Caste” and had similar problems with “Cold Comfort Farm.” Perhaps celebrating Jane Austen’s complete collection doesn’t necessarily translate to loving all British, comedic novels.

For me, it was the same aspect of the book that both made and broke the story for me. I went into it knowing that it was written as a parody of similar romantic, pastoral novels that were popular at the time. And while I enjoyed the elbow-nudging humor this book used to critique the tropes of these stories, I was also unable to become truly attached to any of its characters for the same reason. They served their purpose in highlighting the more ridiculous aspects of the stories Gibbons set out to mock, but they were also distracting.

There are also aspects of the humor that I think are lost on modern audiences who do not have a strong knowledge of rural dialects in 1930s Britain. Apparently, Gibbons took the Shakespeare-route and dropped in several made up words. Words such as “mollocking” and “clettering.” This is a fun idea, especially since Gibbons apparently included this aspect of parody in her novel as an expression of frustration at other authors’ attempts to use phonics in their writing to capture local accents. Which is something I abhor as well. I’ll immediately put down any book that, say, is set in Scotland, and insists on having characters sprinkle in “didnae” or “woudnae” in their speech. Especially when the rest of their dialogue is unchanged. Maddening.

All in all, I struggled with this story, but I can see why it would have been very popular when it was published and can continue to be appreciated today. I actually enjoyed the book much more on a line-by-line basis. Maybe I could get a coffee table book version of it with some of the best witty lines? That I would really like. But as far as a story, I found it wanting.

Kate’s Rating 5: I definitely get why this book is beloved and a classic, but it wasn’t for me. Flora was enjoyable, but the story didn’t connect with me.

Serena’s Rating 5: Samsies. I think I had more fun reading about the book and Gibbons methods of mockery than I did reading the story itself, sadly.

The theme continues to be watching the movie adaptation of the book. The selection for “Cold Comfort Farm” (as there have been a few adaptations) was the 1995 version starring Kate Beckinsale, Ian McKellan, and Joanna Lumley. Unfortunately, the copy that Kate had didn’t play, so she watched clips on youtube. The acting was good, the tone seemed true to the book, and Ian McKellan can really do no wrong as far as we’re concerned.

1. “Cold Comfort Farm” was written in the early 1930s. How do you think some of the themes (feminism, birth control, emotion vs reason) were received back when the book was published? Do they still feel as powerful in 2016?

2. Ada Doom is always saying “I saw something nasty in the woodshed” throughout the novel, though we never find out just what that nasty thing was. Do you think it should have been revealed? Were you happy it wasn’t revealed?

3. This book is a parody of British pastoral stories and melodramas. Do you think that it works as an effective parody of this genre?

4. Have you read other books in the genre that this book sets out to parody? Were you able to spot similarities to other stories like this, and if so, which books and how so?

5. What did you think of the ending? Were you satisfied with how everything got resolved?

“Cold Comfort Farm” is included in these Goodreads lists: “All Kinds Of Classics That Should Be Read At Least Once” and “Strong Female Characters Written By Female Authors”