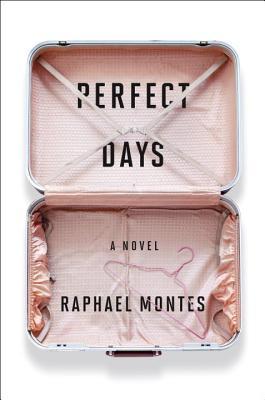 Book Description from Goodreads: A twisted young medical student kidnaps the girl of his dreams and embarks on a dark and delirious road trip across Brazil in the English-language debut of Brazil’s most celebrated young crime writer.

Teo Avelar is a loner. He lives with his paraplegic mother and her dog in Rio de Janeiro, he doesn’t have many friends, and the only time he feels honest human emotion is in the presence of his medical school cadaver—that is, until he meets Clarice. She’s almost his exact opposite: exotic, spontaneous, unafraid to speak her mind. An aspiring screenwriter, she’s working on a screenplay called Perfect Days about three friends who go on a road trip across Brazil in search of romance. Teo is obsessed. He begins to stalk her, first following her to her university, then to her home, and when she ultimately rejects him, he kidnaps her and they embark upon their very own twisted odyssey across Brazil, tracing the same route outlined in her screenplay. Through it all, Teo is certain that time is all he needs to prove to Clarice that they are made for each other, that time is all he needs to make her fall in love with him. But as the journey progresses, he digs himself deeper and deeper into a pit that he can’t get out of, stopping at nothing to ensure that no one gets in the way of their life together. Both tense and lurid, and brimming with suspense from the very first page, Perfect Days is a psychological thriller in the vein of Patricia Highsmith’s The Talented Mr. Ripley—a chilling journey in the passenger seat with a psychopath, and the English language debut of one of Brazil’s most deliciously dark young writers.

Review: I honestly could not tell you what gave me the idea to pick up this book. I think that I saw it on a list on upcoming thrillers and when I perused the description I thought ‘sure, let’s give that one a go’. I’m also always on the look out for works that are of a more diverse kind, so when I saw that the author, Raphael Montes, is from Brazil, I was extra intrigued. But thriller? This is listed as a thriller? Because to me, as a woman, this is pure, unbridled horror. So I am going to call this book as such, this is a horror novel. This is a book where a crazy man, WHO IS THE MAIN PERSPECTIVE WE GET, stalks, kidnaps, and holds a woman prisoner in hopes that she will fall in love with him. Who decided this is a thriller? Lies. False. Now I’m someone who can take a lot of messed up twisted nonsense in her books. Hell, I read “A Clockwork Orange” when I was fourteen years old, not to mention a LOT of the Stephen King catalog at that age as well. But even this book gave me lots of moments of pause, and one moment where I just had to set it down and walk away after yelling out in pure, unadulterated unsettlement.

Teo is the worst, and he is supposed to be the worst, so Montes got his point across. But as much as he was worst and as much as reading this book gave me a serious case of the icks, I really, really appreciated what Montes did with it. Nay, I would go so far as to say that I even liked it. I liked it a lot. It wasn’t a pleasant experience reading it by any means, but it was visceral and it was scary as hell, and I really see what Montes was doing with the whole thing. Bully for me, I guess. What I liked about this was that by seeing this all through the eyes of Teo, we see his perspective and what he’s thinking and why he’s thinking it. But, along with that, Montes does it in such a way that you never, EVER, feel anything but disgust and contempt for him, and for everything he does to Clarice, the supposed girl of his dreams. I feel the need to put out there right away that what he does to her is awful and extensive, so I am going to set out a TRIGGER WARNING for violence against women and men alike, and a rape scene. You’ve been warned. Clarice, however, is a very interesting character even when seen through the unreliable eyes of Teo. She’s certainly a victim of a horrible crime and unspeakable acts at the hands of a psychopath, but what I liked about her was that she wasn’t merely a victim; she has moments of manipulation, moments of power, moments of getting the best of Teo and the upper hand. While initially I was worried that she was going to be one of those ‘I’ll save you with how interesting I am’ characters, and while she was at first, she very early on made herself her own person who is not anyone’s sex object, be it through the eyes of a blatant stalker sociopath like Teo, or even through just a nice guy who needs a jolt in his boring life. The brilliance of this was that Teo completely bought into the idea that she was going to be the one to save him from his dull life (A life, I might add, that involves spending waaaaaay too much quality time with a cadaver at his medical school. That he has named GERTRUDE), and exposes this ‘wonderful interesting savior girl’ fantasy for the harmful and misogynistic nonsense that, at its heart and in its most extreme form, it is. I would even go so far as to say that Montes rips it to shreds. The moment that clicked for me, my mind was blown and I had to have another moment of stepping away for a short while. I saw Clarice through Teo’s eyes, but I also saw her through my own, and the character that I got from her was very, very satisfying and someone that I cared about. I think that had this been a two hundred-some page book of her just being abused, I would have had to put it down. But there were a lot of mind games going on and power plays that simmered below the surface, which gave me hope that somehow she would eventually, totally, find that moment of empowerment and revenge.

I need to talk about that ending though. Without spoilers, of course. But I need to talk about it because I’m not really certain what to make of it. A lot of the reviews and notes I’ve read about this book say that the ending is incredibly, poetically unjust. And while part of me is inclined to agree with that, another part of me wonders if there is a bit of a glimmer of hope to it. I’m waxing poetic here, I realize, but there was one thing thrown out there that, if my own personal theory/interpretation is right, could completely turn the meaning on it’s head. I don’t know if it’s because I need to cling to hope in a book that is basically hopeless, but I see something there that makes me think that all isn’t what it seems by the time we turn the final page in this book. I think that Clarice is going to surprise Teo one last time, even if we as the readers don’t get to see it.

“Perfect Days” was a difficult read, and I wouldn’t recommend it willy nilly to just anyone. But while it made me feel gross and upset and deeply disturbed, I really, really liked it. Raphael Montes, I’m going to keep my eye on you.

Rating 9: A very well plotted and scary book, but not for the faint of heart. Trigger warnings all over the friggin’ place. Skip this unless you are prepared to be very upset.

“Perfect Days” is included in these Goodreads lists: “Amazon Best Books of February 2016 – Combined Fiction” and  “What Women Born in the 90’s Have Read in 2016”. (Note: Okay let’s be real, it’s not on many lists yet. Tell you what, if you liked ‘Misery’ this will probably be reminiscent.)