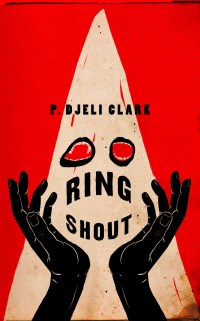 D. W. Griffith is a sorcerer, and The Birth of a Nation is a spell that drew upon the darkest thoughts and wishes from the heart of America. Now, rising in power and prominence, the Klan has a plot to unleash Hell on Earth.

Luckily, Maryse Boudreaux has a magic sword and a head full of tales. When she’s not running bootleg whiskey through Prohibition Georgia, she’s fighting monsters she calls “Ku Kluxes.” She’s damn good at it, too. But to confront this ongoing evil, she must journey between worlds to face nightmares made flesh–and her own demons. Together with a foul-mouthed sharpshooter and a Harlem Hellfighter, Maryse sets out to save a world from the hate that would consume it.

Review: Thanks to NetGalley for providing me with an eARC of this novella!

I have said it many a time, the horror genre can be so effective at symbolism and social commentary wrapped up in a creepy and spooky tale. You’ve seen it with such films as “Night of the Living Dead”, “Get Out”, “Candyman”, “Dawn of the Dead”, the list goes on and on and on. Books, too, do this very well, with recent titles like “Lovecraft Country” and “The Devil in Silver” being two that come to mind for me. I always love some horror that has more to say about society than just ghosts and ghouls, and “Ring Shout” by P. Djèlí Clark is a new title that scratches that itch. Sure, it looks like it’s a book about demons, demon hunters, and black magic. But it’s also a story of the very real horrors of American Racism.

I am usually nervous when I’m about to start a novella that seems like it has a lot of distance to cover and a lot of complicated themes, as it’s hard to fit all of that into limited pages. But even though “Ring Shout” clocks in at less than two hundred pages, Clark does a great job of developing his characters, building an alternative American history with mystical themes, and hitting the metaphors out of the park with biting satire and, in some cases, dark humor. We follow Marys, Sadie, and Chef, three Black women who, in post WWI America, are fighting against demons summoned by dark sorcerer D.W. Griffith that have fed upon white people’s racism and led to a resurgence of the KKK. There are Klans, who are white racists whose hate for Black (and other non-white groups) has been amplified, and Ku Kluxes, actual demons disguised under the robes. Maryse, Sadie, and Chef, with the help from a Gulluh woman with magic and insight and other freedom fighters, are hoping to stop the end of the world fueled by racism, and Maryse may hold the key to it all. What I liked best about this story was that the three main characters are Black women, and they are given a whole lot of agency, motivation, and unique characterizations that make them all very enjoyable and fun. Maryse especially has a lot of complexity, her anger and determination pushing her forward. Clark gives all of them unique voices, but Maryse’s in particular stands out.

The social commentary has a lot to work with her. While it could have been easy to just say ‘demons are the problems behind the racism in the Jim Crow South’ (something you kind of saw in “Abraham Lincoln: Vampire Hunter” with vampires and chattel slavery), Clark doesn’t let racist white people off the hook here. While it’s true that the demons are part of it, those who are influenced already had hate in their hearts. That hate was just used to help the demons gain power. There is also a less obvious but just as powerful metaphor in this story through the magical system regarding these demons that Clark puts in. The only people who can see the demons in their true forms are people from marginalized groups (this is mostly Black people, but there is a Jewish character in the group fighting against the Ku Kluxes that can see them as well); white people cannot. It’s a clever way to call out white people’s ‘I don’t see color’ hypocrisy, as well as a metaphor for the microaggressions that have a blind eye turned to them even when marginalized groups who are affected by them say that they are, indeed, there. I greatly enjoyed that part of the mythos.

And Clark pulls all of this together in a cohesive and engaging story in less than two hundred pages! With some pretty gnarly Lovecraftian imagery and body horror thrown in for good measure (there’s also a nod to this extremely problematic horror icon in this story, which was super fun to see). It made for a bite sized horror treat that I was able to read and enjoy in one sitting, the perfect quick tale for this Halloween season!

“Ring Shout” is a new social commentary horror classic in the making! Treat yourself to something a little more complex this ghostly season, you won’t be disappointed.

Rating 8: Steeped in sharp and biting satire and commentary, “Ring Shout” is a story of demons, heroines, and American racism.

“Ring Shout” is included on the Goodreads lists “Beyond Butler: Spec Fic by Authors of Color”, and “ATY 2020 – About Racism and Race Relations”.

Find “Ring Shout” at your library using WorldCat, or at a local independent bookstore using IndieBound!