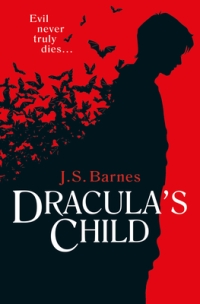 It has been some years since Jonathan and Mina Harker survived their ordeal in Transylvania and, vanquishing Count Dracula, returned to England to try and live ordinary lives. But shadows linger long in this world of blood feud and superstition – and, the older their son Quincy gets, the deeper the shadows that lengthen at the heart of the Harkers’ marriage. Jonathan has turned back to drink; Mina finds herself isolated inside the confines of her own family; Quincy himself struggles to live up to a family of such high renown. And when a gathering of old friends leads to unexpected tragedy, the very particular wounds in the heart of the Harkers’ marriage are about to be exposed…

There is darkness both within the marriage and without – for, while Jonathan and Mina wrestle with the right way to raise a child while still recovering from the trauma of their past lives, new evil is arising on the Continent. A naturalist is bringing a new species of bat back to London; two English gentlemen, on their separate tours of the continent, find a strange quixotic love for each other, and stumble into a calamity far worse than either has imagined; and the vestiges of something thought long-ago forgotten is, finally, beginning to stir…

Review: Thank you to NetGalley for sending me an eARC of this novel!

I have a very special place in my heart for Bram Stoker’s classic vampire novel “Dracula”. One, I do love a good vampire story in which a vampire is the predatory menace that it ought to be. But the bigger and more personal reason is because I first read it in college in my favorite class of all time, “Monsters, Robots, and Cyborgs in Literature”. The content was great, but it was my professor, Andy, who really made the class. We read many stories, “Dracula” being one, and I wrote a paper about the feminist icon that is Mina Harker. Andy and I kept in touch after my time in that class, and sadly he passed away a few years ago. I will always associate this book with him. So taking on this new ‘unofficial’ sequel, “Dracula’s Child” by J.S. Barnes was a risk. One I was willing to take because of the solid premise, but a risk nonetheless.

The structure of “Dracula’s Child” is similar to “Dracula” in that it is epistolary in nature. The plot unfolds through letters, diary entries, telegrams, and newspaper articles, and the tone and writing style is very well matched to the tone of the original. Barnes clearly worked very hard to reproduce that device, and it really does sound like the original in a lot of ways. I felt like he pretty much captured the voices of the original characters, and that he also expanded upon some of them to give them a little more complexity. We also had a fair number of threads to attend to, from the original characters to new ones whose connections to Dracula are seemingly tenuous at first, that all start to converge in a well paced and well thought out way. This made for a slow burn of a tale that is expansive, and really does hype up that if Dracula is coming back for his revenge, he’s going to be thinking BIG PICTURE. The reveals are also slowly paced, such as Mina and Jonathan’s son Quincey’s connection to The Count. And no, there was no addition of a romance between Dracula and Mina to be found in these pages. Which is probably for the best, but man, for something that went WAY off course of the original content I LOVED the chemistry between Winona Ryder and Gary Oldman in “Bram Stoker’s Dracula”.

So really, Barnes achieves what he was setting out to do in regards to making you feel like this could, in fact, be a direct sequel to the original story. And for that, I really have to give him props. That couldn’t have been easy to do, and he did it. And yes, there are some really well done scares in here, from suspense to body horror to the dread of a vampire on the hunt.

But the thing that basically derailed this story from being the awesome thing that I thought it was going to be was that for the last third of the book, Mina Harker, whose presence had been strong and fierce and at the forefront, was sidelined and then made incredibly passive. Certainly by today’s standards, Mina may not seem like much of a ‘strong female character’, and I’m definitely not saying that Stoker was some progressive when it came to gender politics in the original. But for Mina as a character to have perspective chapters, to be using her wits and her shorthand to try and figure out how best to fight off Dracula, for her to be with Jonathan, Seward, Arthur, Quincey, and Van Helsing during their journey? That was huge! So in a book coming out in 2020 I had hoped that she would be doing more so as to reflect her critical role in the original as a warrior against Dracula… And while for part of this book she seemed to be, for her to be sidelined in this way was very disappointing.  It was already frustrating that most other woman characters were sacrificed for man pain or to be tragic plot devices. But to do something similar, though admittedly not as final, to Mina? UNACCEPTABLE.

Mina frustration aside, “Dracula’s Child” does a pretty good job of feeling like a true follow up to “Dracula”. I’m not sure if the purists would agree, but for this person who has such a personal and protective connection to the original work, it mostly succeeds in what its trying to do.

Rating 7: With a well reproduced tone and a slow burn of a creepy story, “Dracula’s Child” is a fun sequel to a classic, but doesn’t give certain characters the credit or stories they deserve.

“Dracula’s Child” is new and not on many Goodreads lists as of yet, but I think that it would fit in on “Epistolary Fiction”, and “Vampires That DON’T Sparkle” (snide title, but really it’s just a list without vampire romance).