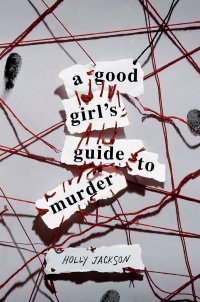 Book: “A Good Girl’s Guide to Murder” by Holly Jackson

Book Description: Everyone in Fairview knows the story.

Pretty and popular high school senior Andie Bell was murdered by her boyfriend, Sal Singh, who then killed himself. It was all anyone could talk about. And five years later, Pip sees how the tragedy still haunts her town.

But she can’t shake the feeling that there was more to what happened that day. She knew Sal when she was a child, and he was always so kind to her. How could he possibly have been a killer?

Now a senior herself, Pip decides to reexamine the closed case for her final project, at first just to cast doubt on the original investigation. But soon she discovers a trail of dark secrets that might actually prove Sal innocent . . . and the line between past and present begins to blur. Someone in Fairview doesn’t want Pip digging around for answers, and now her own life might be in danger.

This is the story of an investigation turned obsession, full of twists and turns and with an ending you’ll never expect.

Review: Back when we were a COVID-free world and the thought of going shopping in person didn’t give me hives, my Mom and I went to Barnes and Noble on a trip to the Mall of America. I always like to check what the YA display has, because even though I know it will usually be heavy on the fantasy and romance, you can also find some gems of teen thrillers. That was how I initially learned about “A Good Girl’s Guide to Murder” by Holly Jackson. I let it be, but the name stuck in my head enough that when quarantine happened about a month later I had the title of a book I wanted to order. It still took a little time to get to it, but I finally picked it up and gave it a go…. and kicked myself for waiting to start it as long as I did.

“A Good Girl’s Guide to Murder” has all the elements that I want in any kind of thriller, let alone a teen one. The protagonist is interesting and well fleshed out, for one thing. Pippa is the kind of teenage girl I probably wished I was at the time. She’s clever, she’s funny, and her true crime obsession, one true crime in particular, is a fun nod to all true crime enthusiasts everywhere. But on top of all of those things, she is by no means perfect, but not in the obvious ways that some thriller heroines go. She has a well adjusted home life, she has healthy friendships and relationships, and she isn’t drowning in her own dysfunction. You like her almost immediately, and even when she does sometimes do dumb things (like most teenagers probably would on occasion), they are believable. And it isn’t just Pip that is enjoyable as a character. Her friends are all fun with witty and snappy personalities, and her partner in investigating, Ravi, is incredibly likable along with being a little bit tragic. Ravi is the younger brother of Sal, the boy who everyone assumes murdered Andie but who ended up dead before he could be charged (supposedly by his own hand). Not only does Ravi’s involvement make Pip’s endeavor all the more personal and high stakes, it also makes it feel more ‘legitimate’ as opposed to just a random girl not really connected to a tragedy sticking her nose in it because of a quirky true crime obsession. Jackson also makes note of racism within police investigations and media coverage, as Sal, being Indian American, was immediately accepted as the murderer because of racist ideas about his culture and how women fit into it, in spite of a few big inconsistencies. Ravi, too, doesn’t have the same privileges as Pip does as they investigate, and Jackson definitely makes certain to address these things when Pip needs to be educated on them. I thought that was a good theme throughout this novel.

And on top of likable characters, we also get a VERY stellar, complex, but not overwrought mystery at hand. We get to see Pippa approach it through her perspective in a few different ways, be it through the narrative itself, her log entries for her capstone project, or the notes that she has taken about the case. The clues are all there, and while I admit that I kind of figured out one of the big aspects to the case pretty early on, Jackson throws in enough believable red herrings that I did end up doubting myself. It’s a classic whodunnit with a lot of people who would have reason and motive, and then you add in ANOTHER layer with a mystery person starting to threaten Pip as she gets closer and closer to finding out the truth about what happened to Andie. There are well executed moments of legitimate tension, and you do really start to worry about Pip as she starts to unearth long kept secrets and lies. This is the kind of suspense you really want in a thriller, and Jackson is able to maintain it throughout the story, though there are a good number of moments of levity sprinkled in. Just to give the reader a break in the tension here and there. I was hooked, and basically read it in the course of two days, foregoing other forms of entertainment until I was done. Yeah, it’s VERY fun.

And the best part is that a sequel is coming out next Spring here in the States.

“A Good Girl’s Guide to Murder” is a great read and a hell of a lot of fun! Shame on me for sleeping on it for so long! Thriller fans, do yourself a favor and go read this book!

Rating 9: Incredibly fun, properly twisty, and a very impressive debut novel, “A Good Girl’s Guide to Murder” gave me everything I want in my YA thrillers, and more.

“A Good Girl’s Guide to Murder” is included on the Goodreads lists “Young Adult Crime/Murder Mysteries”, and “Can’t Wait Crime, Mystery, and Thrillers 2020”.

Find “A Good Girl’s Guide to Murder” at your library using WorldCat, or a local independent bookstore using IndieBound!

3 thoughts on “Kate’s Review: “A Good Girl’s Guide to Murder””